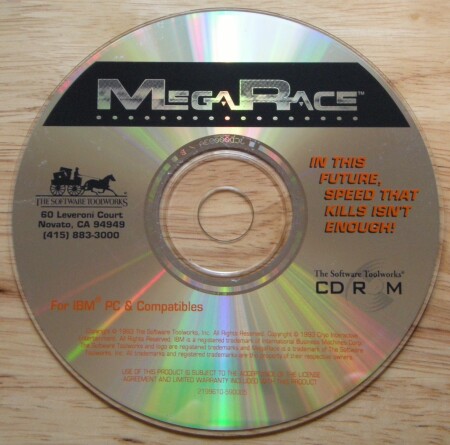 The Game
In the future, the world's most popular sporting event is the Megarace, sponsored by the VWBT (Virtual World Broadcast Television) network. They have chosen you to be the new Enforcer in the Megarace competition. Your host and guide, Lance Boyle will introduce you to the game as well as provide you with information on each track and the denizens inhabiting the them. As the Enforcer, you will be racing against five of the most vicious speed gangs around, each one with the primary goal of helping you to achieve an earlier demise.

Winning a race involves overtaking the lead car called the, "Pack Leader". At the start of each race, you are in last place. When the race roars to a start, you will come up against each of the Pack Leader's sidekicks, whose job is to keep you from advancing further into the race. You will be able to get past the opponents in one of three ways. First, you can pass the opponent's car. After gaining sufficient distance from the car, it will explode. Secondly, you can ram the car into the side rails or from behind. Once you do enough damage to the opponent's vehicle, it will explode. Finally, you can use your car's weaponry to blast the opponent's car to oblivion! The last method is by far the most effective. The only problem is that your ammunition is limited, and if you use all your bullets on the sidekicks, the Pack Leader becomes a really big problem at the end. His/her car is usually armored better than the others and is faster too. Each race lasts for three laps. You must defeat the Pack Leader by the end of the three laps or the race is lost.

The Megarace includes an impressive fourteen tracks as well as several bonus tracks. Each track is situated in a unique environment. Your races will take you from the city streets of futuristic San Francisco to undersea worlds to outer space. There are 360 degree loops, spiral twists, monstrous hills, and some of the most deadly turns you awaiting you on each track. To make matters more challenging, each track contains a series of special zones. A zone is activated by running your car over the zone symbol. Some of the symbols provide your car with power-ups such as turbo boost, more ammunition, and shields. Others are less generous, causing your car to slow down, skid into a 360 degree turn, or lose valuable energy. You lose the race if you fail to destroy the Pack Leader by the end of the third lap or your car's energy depletes to zero and explodes.

The game introduction reminds me of the movie "The Running Man": The setting is sometime in the distant future. Television has become the main source of entertainment and the Megarace is the hot trend everyone is interested in seeing. You get to play the part of the hunter in this game and the speed gang is the prey. There is a gauge on your car's electronic display called the "Thrillometer" which is used to detect how excited the audience is with your performance in the race.

Megarace was one of the better arcade racing games of the 90s. The races are fun and challenging and the cut scenes in between each race entertaining. Let the races begin! 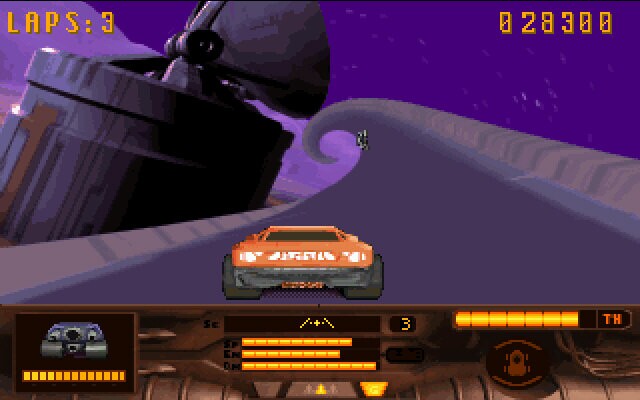