The Game
MDK 2 contains the same basic elements as the original. You run, you see alien, you shoot alien, maybe solve a puzzle, maybe shoot some more. Or maybe that's just one way of accomplishing what you're trying to do. While this may sound like your normal tried-and-true cookie cutter action game, I assure you, it is not. For one thing, shooting isn't always the answer. Since you are no longer limited to playing as Kurt, but may also play as two other characters, Max and the Doc, there are 3 times as many items and weapons and levels, and 3 times the fun. As Kurt, you do what he does best. Snipe. Sure he gets big guns and grenades, but shooting the off an alien's head from 300 yards and watching him suck in the air that kills him, well that's something that every person on this planet should experience in their life, along with drunken bowling. As Max, the aforementioned six-legged dog, you shoot, but not with your standard action gun, no, no. As Max, you have a wide selection of handguns, uzis, shotguns and chainguns, and best of all, you can hold up to 4 at a time.

And then there's Doc. He doesn't really get weapons, so to speak. Instead, he picks up random items, such as a toaster or duct tape, and uses them not only in the surrounding environment, but also, sometimes, as weapons. Come on, what other game gives you an atomic toaster as a weapon, answer me that. But alas, Doc is not the action hero type. No movies will be launched about the Doc, and the normal shooter junkies will be disappointed, but if you like to think about how to solve something, rather than just what body part to aim for, then you will love the Doc, as I do. Or, on certain levels, you can just grab some Plutonium (available at a Wal-Mart near you) and turn into an Incredible Hulkish Doc where you can bash the snot out of enemies.

Unfortunately, you don't get to choose who to play as. You play one (long) level as Kurt, then as Max, then to the Doc. Lather, rinse, repeat. While I didn't like this idea at first it grew on me very quickly, as it gives you a chance to play as someone you may not have gone back and played after you beat the game once. And even if you don't like one character's first level, the next is different.

All in all, MDK 2 is one great challenge. Back then, I was a little skeptical was because it's sort of a port from a console, and ports haven't had the greatest track record. But this is one of the few that was done right, adding full keyboard support (which should be a given when porting games), and save-anywhere capability, among other gameplay enhancements. If you like to have fun playing games, and even if you like to laugh, there are a few parts in MDK 2 that are simply FUNNY, not the normal supposed-to-be-junk that you see in a lot of games, but clever humour, something that is generally very rare. 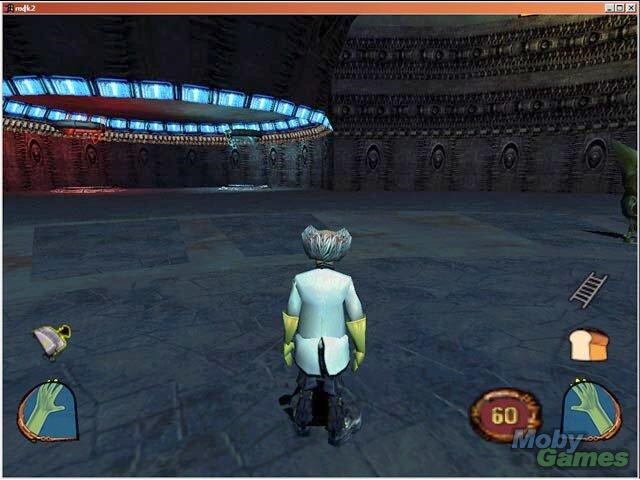