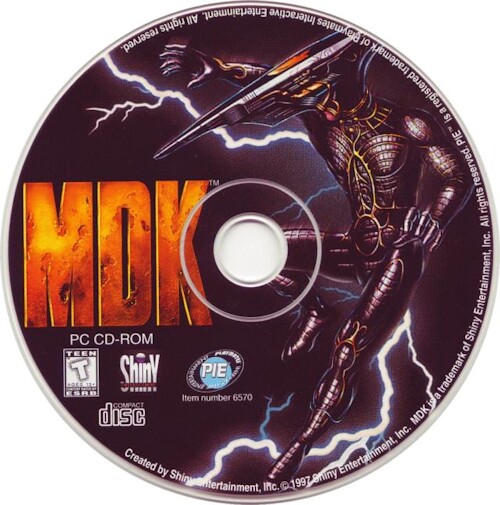 The Game
MDK is one of my all time favorite games. I just keep coming back to it because I just love everything about it. It's universe, and just the fun of blasting my enemies' heads off with a sniper rifle.

A little about the story: In MDK you are Kurt Hectic, a skinny janitor that is "chosen" to save the earth from evil aliens called Stream Riders. They have come to earth just to crush us, and now Kurt is being sent to the 5 giant trucks that's doing the crushin'. He must battle each commander of these giant trucks and put an end to the final boss, Gunter Glut, the leader of the aliens. A very simple plot, but I like it.

The graphics are just stunning for a game of its age. This was the time of Quake where you would run around in small corridors, and here MDK just launches with an arsenal of huge arenas! This game has some of the most memorable game scenes of the 90's, especially the glass world. Everything is reflected in the surfaces and you really get the feeling of being in a really huge world, giving the game a very epic feel. And it never lags! Promise! I can run this on my brother's stone age Windows 98 computer and it never lags! And not to mention in the first level where you fly over a huge arena bombing aliens and buildings, that just feels incredible. Although the worlds seem polygonal today, the textures and the small details in this game makes it very varied. I still prefer the Windows version over the PlayStation version because the PS1 version had to cut down most of the graphics and using weird scaling methods to make them appeal bigger.

The controls are great. It kind of feels like playing Doom in 3rd perspective, which should give you some idea on how it feels. Very smooth controls that never feel overcomplicated.

The gameplay is really varied too. There are small minigames hidden inside MDK, but they blend with the main gameplay nicely. The level design is also so linear that getting lost is almost impossible. This is what want games to have. I never were so fond of non-linear worlds, because you easily get confused and don't know what to do next. MDK is like old railshooters. Just go straight forward on the path. But there are secrets too of course. Plenty of them, but you can never get confused in MDK, which I think makes it even much more of a classic. Even though the levels are linear, as mentioned before, they feel really big. Each level is composed of several stages, serving as levels within the levels, and the design and gameplay of these levels can vary pretty much, making MDK a very short game that feels like it's huge. Also, the guys at Shiny bring in tons of mad humor, greatly toning down the seriousness of it all. And that's what I like about this game, it never gets to serious! It feels like a breath of fresh air compared to Quake and other action games. It's epic and dark, but there's always some quirky reference or hilarious twist in there to keep you laughing while being blasted by thousands of evil aliens. One of the things to mention is the powerups. Who would've thought the world's smallest nuclear bomb would be used merely to open locks? And how can the aliens take over earth if they are too stupid to notice the difference between the real Kurt and his sidekick, the inflatable dummy decoy? It's just those little details that make MDK a serious action game with humor.

The music is just awesome. Shiny did a right thing in hiring Tommy Tallarico because he gives so much atmosphere to the experience. And the music reflects the level design in variety. Everything from epic rock anthems(Stranger Things, Vengeful Alien), to tribal jungle rythms and big epic themes(title music). The music is pretty much the reason I continue returning to MDK. It feels like being in a really cool movie. The sound effects sound pretty stock, but they never really bring down the experience. Hell, Doom even used stock sounds, but I don't think people mind as long as they fit and don't sound out of place. The voices of the aliens are sometimes incredibly comedic and I can promise you you'll sometimes just laugh your ass off at their speech. And I just love that metallic scream from Kurt Hectic when he dive into the giant cities.

Also, in the end you get to see a music video. I've NEVER seen that before. A music video!

In the end how does one describe a work of art? MDK must be played to be believed. Even today with all the realistic and serious games, MDK feels fresh. It has humor without being too silly or cheesy. It still has that epic feel to it. I recommend MDK to anyone who hasn't played it because you are really missing out on a great game. 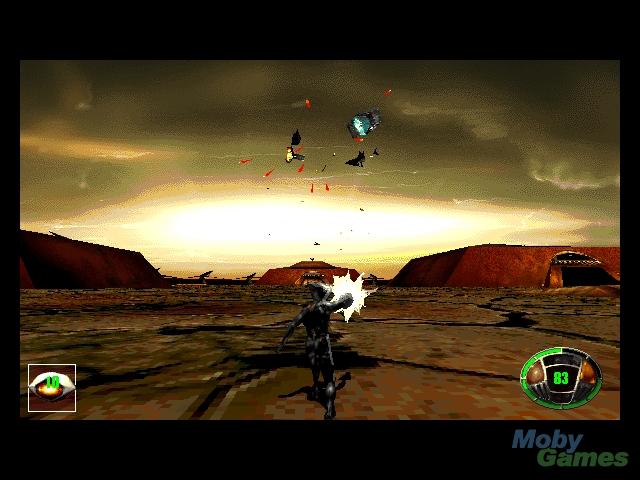 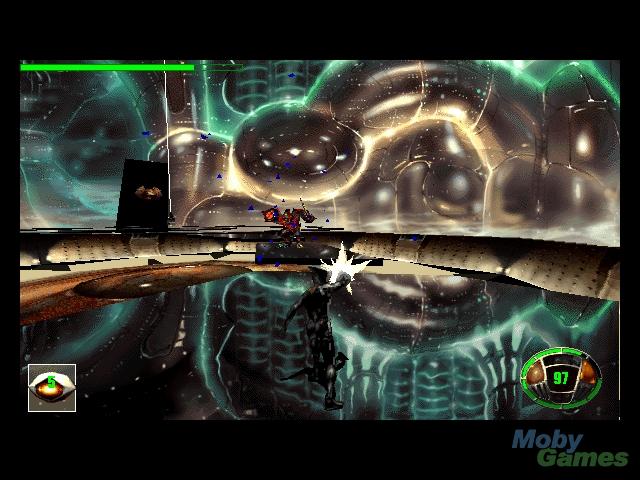