The Game
In 1989, one year after the cult classic Manhunter: New York was released by Sierra, an even more unusual sequel spawned from the minds of its creators Dave, Barry, and Dee Dee Murray. Manhunter 2: San Francisco picks up the story immediately where first one left off.

Just when you thought the world was free from the Orbs, they turn up again. Still trying to pinpoint and eliminate their opposition by pitting human against human, the tyrannical aliens have moved to the West Coast in Manhunter 2: San Francisco. The prequel, Manhunter: New York, ended with one of the aliens' henchmen, the vile Phil, getting away. Now you've traced him to San Francisco, but before you can close in, your ship crashes. As luck would have it, you land on top of a Manhunter named Peter Brown. Appropriating the pancaked Browns ID card and MAD (Manhunter Assistance Device), you take on the dead man's identity. You take your cues from the MAD tracker. It allows you to view the participants in a crime, along with any other contacts. Once a location has been viewed on the tracker, it can be accessed by the MAD travel mode which transports you there instantly.Each location must be searched completely for clues and items that might help solve the case. Of course, your main interest is discovering clues to Phil's whereabouts. But since you don't know exactly what you're looking for, you'll have to visit any accessible location.

In short, this time, the situation is worse. You're in a strange city where you haven't the least idea of what is going on, except for a deep suspicion it's something nasty. No one's going to help you, of course, and those who might be able to provide some clues have the unfortunate tendency to turn up dead, often horribly so. Fueled by the success of Manhunter 1, this game more gruesome than the last one.

The basic set-up and interface of the game is the same as it was in Manhunter: New York. Almost everything is controlled from a joystick or keypad. Aside from the few occasions where names have to be typed in, the keyboard is hardly used at all. Travel is as quick and easy as before: just move the marker to where you want to be and you're there.

Also, as before, you have to view every screen with extreme care, and move the cursor over each part of it, so you don't miss an important clue or item. This is very important when trying to figure out people's names. Objects in the inventory are used by highlighting them on the inventory screen. Usually, if the particular object has no use in a situation, nothing happens except a picture of it is displayed.

On those unfortunate occasions when you meet an unpleasant fate the game automatically backs you out to just before your demise to give you another chance. Even so, and particularly with arcade sequences, there may be times when you can't get away from the situation entirely. Therefore, saving before doing anything potentially dangerous is a good idea. Saving and restoring, by the way, is quick and you can save virtually anywhere, including during arcade sequences. This is quite helpful at times, especially when going through the lava maze.

The one big change, and a very good one, is the introduction of variable difficulty levels for the arcade sequences. For those people who grit their teeth over arcades in an adventure game, this is a welcome addition. By allowing the player to choose difficulty level, the Murrys have managed to please just about everyone. The "Easy" level is, indeed easy, and makes most of the sequences a breeze. You can zip through them and get back to the good stuff without wasting too much time.

The plot is more interesting to follow. In this game, we discover a group of Asians who inhabit San Francisco's Chinatown that belongs to some underground group, easily recognizable by the large dragon tattoos discovered on the dead members' palms. We find out that San Francisco is crawling with rat mutants, left over abominations who are the result of the Orbs dabbling in genetics. Who are those people that have knocked me out and stuffed me in the closet of the laundry? What is the story behind all the green mutants on Alcatraz Island? As you have probably noticed, Manhunter 2 is actually a mystery/adventure hybrid. Filling the role of a detective makes the game a lot easier to follow, which is what the designers intended.

So then what is the mystery about? Well, a large part of the game revolves around discovering, little by little, just what is going on here. Ostensibly, you're still trying to track down the vicious Phil from New York. You know he's here, especially after a few corpses with a P carved on the forehead start showing up.

However, other bodies (and parts of bodies) abound, and not all of them are Phil's work. It helps to have a scorecard handy so you can figure out who is doing what to whom and for what reasons. For instance, the dead men with the dragon tattoos: whose side are they on? And that corpse in the doctor's home, why is he wearing a gray robe? And what happened to his other arm?

Add in, among other things, vicious Dobermans, carnivorous Ratmen, necrophiliac shopkeepers, opium dens, a new breed of Orb, mysterious doings at the Ferry, a few assorted ninja, and cryptic references to Hell, and you have quite a bit to sort out. In fact, it almost seems more than a poor ex-Manhunter can handle. Especially one who would probably prefer not to get involved anyway, after all the doings back in New York.

Overall, Manhunter 2 was a little easier than the previous game. This is probably due to being more experienced with the style of play and graphic clues that make up much of the investigative work needed to complete the game. On the other hand, the story line here is more involved and complex than in the original Manhunter, and in some ways more satisfying, even though not all your questions may be answered as to what is happening.

Manhunter 2 was an excellent follow-up to the previous game, one that improves upon the style of Sierra's quirky hybrid predecessor. The story is intriguing, somewhat disturbing, wholly original, with a surprisingly challenging mystery plot. 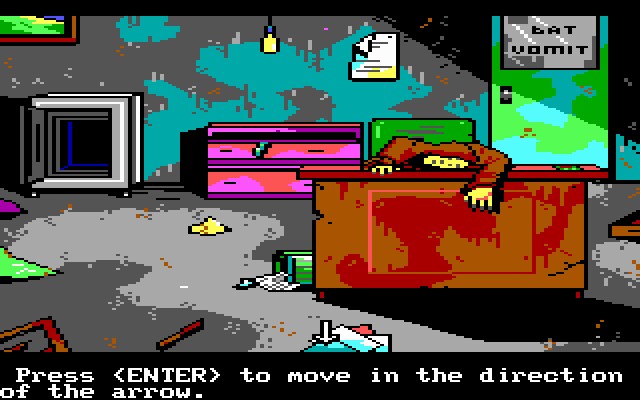 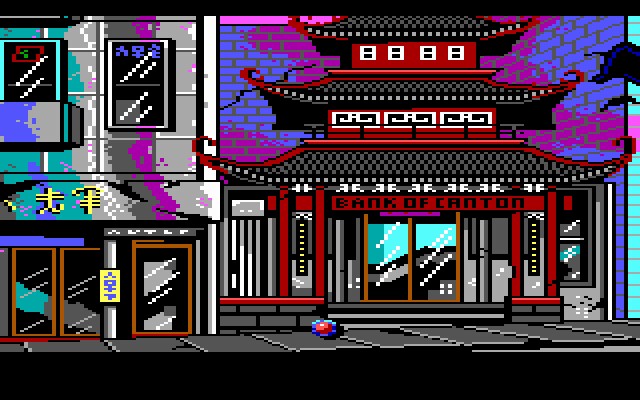