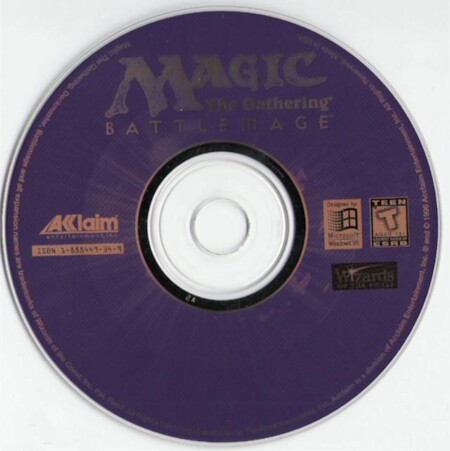 The Game
Magic is a turn-based card game released by a Seattle area company called Wizards of the Coast. It combines just the right amount of luck, strategy, and quick thinking into a game that, amazingly, is never the same twice.

The powerful planeswalker (magic user), Ravidel, has summoned the seven most powerful mages in the world of Dominaria to gather in Corondor, a continent of diverse creatures and domains which is divided, temporarily, into 30 neutral territories. The mages, of course, all know each other -- two women, three men, a minotaur and a demon, with more sub-plots between them than the staff of General Hospital. They have been well written, however, and the conflicts between them give them a good sense of individual identity and solidify the story behind the game.

The magic in the Battlemage universe draws its power from different terrain, resulting in five different types of available power: Black (death magic, drawn from swamps), White (life magic, from plains), Red (fire magic, from the mountains), Blue (water magic, from the oceans) and Green (earth magic, from the forests). Each has its strengths and weaknesses. Red, for example, has some incredibly devastating spells, but it's not much for flying creatures. To counter this, most successful players use two different colors to construct their deck, and that's what Acclaim has done with these seven mages. You can play a campaign from each mage's point of view, using their particular color combination. This option gives the game a lot of replayability.

You start each campaign with a set number of spells, creatures and land in your tome, and select from these to create the combination you will use in your battles around Corondor. Turn by turn, you and your adversaries negotiate with neighboring neutral territories for alliance and goodies, and fight each other for the territories that have already fallen under one mage or another's control. As you progress, capturing land, you will gain new cards to add to your arsenal.

Each turn, you may make one attack on a new territory. Initially, each player has one territory and all the others are neutral. When you attack these neutral territories, you often encounter the local denizens and engage in detailed conversations with them. The interaction here is of the Choose Your Own Adventure type. The individual you're dealing with makes a statement, then you get a choice of three responses. Choose correctly throughout the conversation, and they'll give you information, or spells and creatures, or they might even turn the territory over to you, no battle required! This even works when one of your opponents controls the space. Of course, say the wrong thing to them and they'll send you packing, sometimes leaving your spell book or your purse a bit lighter for your troubles. This system works very well.

Eventually, you'll come across a territory that you want and your opponent has, and no amount of bargaining is going to get it for you. You're going to have to fight for it. But that's what you're playing for, isn't it?

You get to look at seven cards from your deck at a time, adding new ones as you use them up. Just as in the card game, you bring out land cards from your deck for use in summoning creatures and casting spells. As I said before, Magic the card game uses a turn-based system, which gives you plenty of time to plot each move, budget your resources and plan strategy. In Battlemage, Acclaim has taken the risky step of changing that aspect. Everything is real-time, although you may pause the game to peruse your cards. You bring land out, cast spells, and "sic" your various nasty monsters on your enemies in an attempt to drain their life points as quickly and efficiently as possible. There's a limit on how fast you can bring out land, and casting spells temporarily uses up this land power (called mana). Also, each time you cast a spell or summon a monster, it takes a few seconds, so there are controls on how fast you can attack. It's a tricky switch for veterans of the card game, but once you get used to it, I think you'll enjoy the pace. If Acclaim had stuck with the original system, this would be one seriously long game, and I doubt they could create an AI smart enough to give human players a decent challenge. So this new, high-speed Magic relies on human fallibility under pressure to even the score between person and machine.

The battle continues until either you or your opponent has lost 20 life points. Lose on offense, and you lose nothing overall, except your turn. Lose on defense, and you lose whatever territory was attacked, along with the land magic it provides to your arsenal.

Acclaim's real-time system has captured much of the strategy and counter-strategy that made the card game so great, although because of the limits of the medium, some nuances cannot be exploited.

Magic is a pretty game. The artwork for the characters is straight out of the comic pages, giving them a dynamic feel. The interfaces are beautifully constructed in SVGA. Best of all, several hundred of the most popular Magic cards have been used for the game with their original artwork. You can enter the archive and view all the cards, with an explanation of what they do and any special powers they have. You can also enter the Tome Builder, where you can construct custom decks from all the available cards to be used in single duel mode against one of the computer opponents.

Each new land in the campaign mode has a specific painting, which you see when you attack the first time. Corondor is a nice place, with majestic mountains, frozen wastes, sweeping valleys containing sprawling villages, and massive floating cities. Most are paintings with a little animation for water effects, but they're delightfully detailed. The artist responsible for these illustrations should be commended for doing such beautiful work.

The music is great -- ethereal, wispy, with deep resonating bass and orchestral scores that are a constant presence wherever you are in the game. There is never a period of silence, which I appreciate, and the music has no noticeable repetition to it.

In battle, whenever you summon or cast, a voice says the name of the spell. It not only sounds cool, but it lets you know what your opponent is whipping up for you, just off screen. The creatures grunt and snort at each other. You can hear the tink of claw on metal and the death cries of the vanquished. Here again, Acclaim has spent a great deal of time to create the right atmosphere for this game.

The game is beautifully constructed, and most of the interface is nicely done. Acclaim did far better than I expected with a tough project like this. Magic players will still like this game for its fast pace. 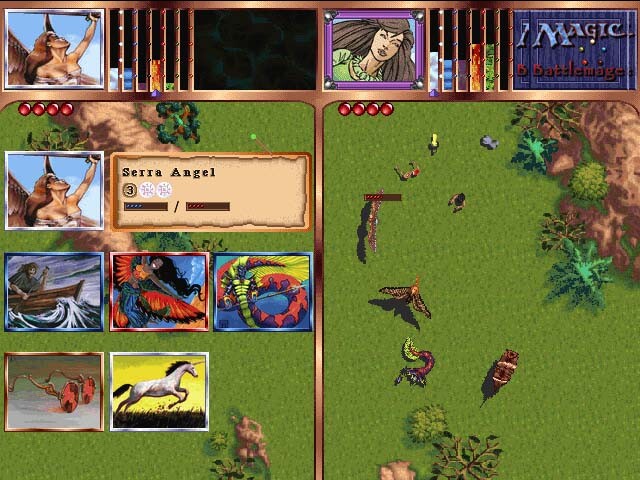 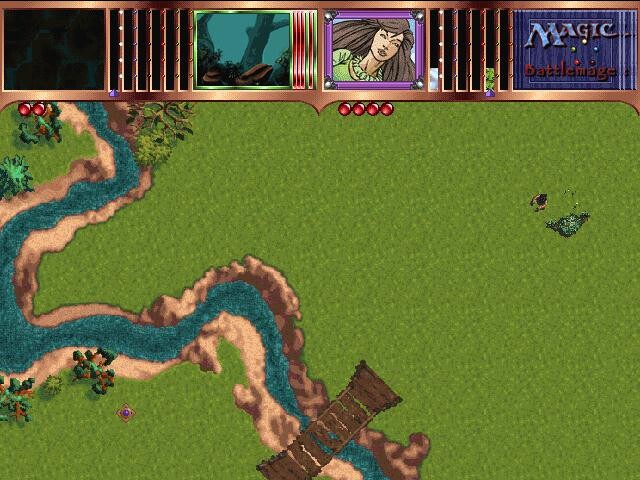