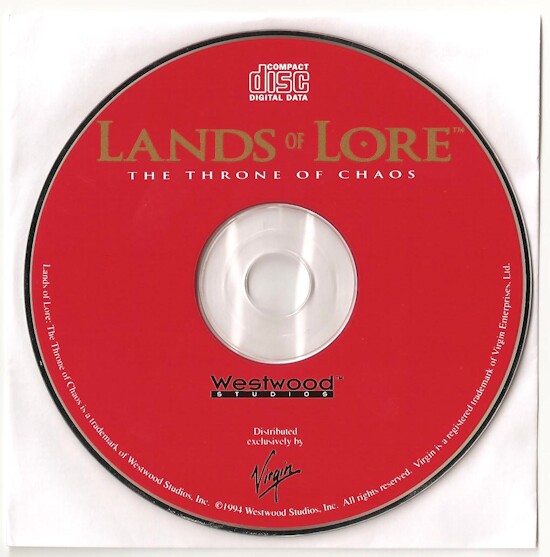 The Game
An evil sorceress, Scotia, is determined to wrest the throne from King Richard. Not surprisingly, your character (and friends) must stop her and save the land, as well as King Richard (whom Scotia manages to poison fairly early in the game).

The plot moves along quite linearly, with a few sidequests, but none to distraction. Try to do some-thing out of order an the game either forbids it or one of the NPCs in your party nags you to death about what you "should" be doing. If you were frustrated by the hordes of sidequests in Arena, Daggerfall, and the Xeen series, Lands of Lore will be a welcome change for you. As a result, the game is truly fun to play and is chock-full of nice touches.

Who Am I?
As the game begins, you may select a champion from four possible choices, each with their own mix of Magic, Protection, and Might abilities. As you proceed through the various quests, a number of other characters join and leave you. These characters are of a variety of races (some quite interesting, such as one with four arms) and of sexes.

Abilities and Advancement
Each character has only three skills: Might, Rogue, and Magic. While some Wizardry and Realms OF Arkania fans may be put off by this, I found it refreshing and I feel that the resulting playability is a nice change of pace. The characters don't even have overall "levels" but rather levels of proficiency in each of the three categories. The more you utilize a particular skill, the better you get at it.

Magic is similarly simple. As far as I can tell, there are only six different spells you can learn, one being Heal and the rest being for combat (although some have other uses, as you will see). The potency of the spell to be cast is chosen at casting time. Furthermore, any character can cast any spell, providing he/she has sufficient spell points and the party has that spell available. Offsetting this apparent lack of spell variety are various items you can find which, when used, yield spell-like effects.

The Environment
The game takes place in the outdoors, in caves, mines and dungeons, and in structures like mansions, castles There are also the prerequisite single-screen inns, shops, etc. Each type of location has its own ambiance, a fact not lost on and appreciated by yours truly. Point and click on most anything which looks interesting or unusual and you are rewarded with some effect, a description, or even some light-hearted humor.

Graphics and Sound
The graphics are very nice in this game. There are many beautiful fully-animated cut scenes throughout to move the plot along. The outdoors remind me of Wizardy 7 (hmm, this tree-maze looks awfully familiar!), while the dungeon "feel" reminds me of Ultima Underworld. The movement is still tile-based (albeit with scrolling as you turn or move), but the "monsters" move around in realtime 3-D just like in UUW and the throwing/dropping of objects has that UUW feel. Animation is smooth and very plentiful.

The automap is especially nice. You can view the map of every area you have explored with ease, and small icons and color-coded squares are keyed right on the map to represent chests, important locations, levers, secret doors, and so on. There is, however, no note-taking capability. Frankly, it isn't necessary.

The main screen has the status of each character (hits, magic points, and picture) beneath the main view screen. Below the characters is the party's inventory "strip", a horizontally-scrolling strip of inventory slots from which you can easily add items or grab them for use. Others have called it a nuisance in that if you haven't organized your inventory properly, valuable seconds are lost scrolling through it. I, however, found this a natural and easy way to manipulate the party's objects; after all, in real life, if you kept things in a backpack, you'd want frequently-used items right on top to avoid rooting through to the bottom every time you needed something. Of course, other main screen features include file, automap, and other icons.

I am impressed by the sound in this game. The background music in certain sections actually elicited a smile from me at times -- and I am a tough sound critic. The sound effects are also top-notch and varied, with different sounds for different monsters and weapons. I even found a part of a dungeon I didn't know existed because as I drew nearer to certain walls, I could hear monster "activity" noises grow louder when there was no other explanation.

Action
When out exploring, everything happens in real time. Beside the portait of each character are two action buttons. One is to use the equipped weapon and the other is to cast the current spell. Fighting becomes a furious mouse exercise, especially when there are more than one or two characters in the party, as you use items. While I found this fun, I was disappointed that I didn't often have much time to watch the action going on, because the enemies are varied and well-rendered. Don't, however, assume you have to fight every nasty-looking monster. Some can be approached and bluffed or reasoned with.

There is also a nice variety of weapons available -- and according to the manual, certain weapons work better than others on particular enemies. So don't throw away a mace just because it doesn't increase your Might as much as that sword -- you may find it does much more damage on those thick-skinned reptiles!

The underground action really pumps up the adrenaline. Sometimes I find myself hiding in a dead end, almost dead, and then gradually hearing some sort of enemy creeping up closer and closer. Then it's gone, whew, it must have gone the other way. Quick, take a short nap! Other times, my lamp oil is running low, my visibility is poor, and I can vaguely see something up ahead. What is that? Then I step on a switch (which I wasn't careful enough to notice). Ka-Chink. Uh oh! A trap! Run! I dive into an alcove just as the fireball shoots by, lighting up the darkness. Yikes, that was close!

Summary
Lands of Lore is an easy-to-play RPG with beautiful graphics and excellent sound, and it is likely to keep you involved long enough to make it a worthy purchase. This is NOT an easy game which you will finish in a couple of days -- trust me :). Best of all, it is a whole lot of fun! 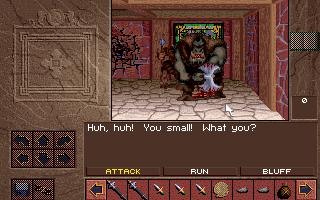 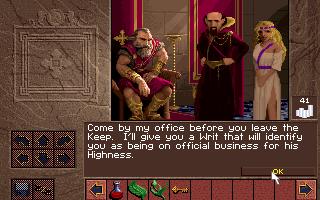