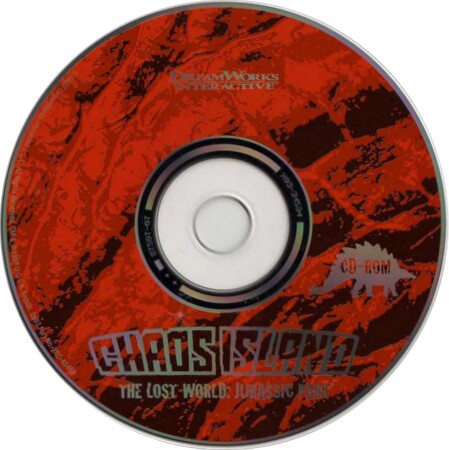 
Jurassic Park: Chaos Island was released to coincide with the release of The Lost World: Jurassic Park. It is a strategy role-playing video game, where the player controls characters displayed on a map, directing where they move with the mouse and giving them commands either with the mouse or from a menu.

The game features five characters from the film, each voiced by the actors who played them in the film: Ian Malcolm (Jeff Goldblum), Sarah Harding (Julianne Moore), Nick Van Owen (Vince Vaughn), Eddie Carr (Richard Schiff) and Kelly Curtis (Vanessa Lee Chester). A "Research Assistant" can also be used as a playable character and is the only character you can have more than one of. He is also the only one who cannot have his stats changed. Each of the playable characters has a different level of speed, eyesight (used for uncovering the fog of war) and number of supplies they can carry at one time. Only Malcolm, Owen, Carr and the Research Assistant (or a number of them) are available from the start - Harding becomes playable when you find her in Mission 1, and Kelly becomes available after the first two missions. Each character costs a certain number of points when you select them for the level - there is a limited number of points you can spend before the level begins, but when you collect supplies, they can be spent on bringing in characters during the level. Richard Attenborough provides the voice of John Hammond, who appears in cutscenes between levels.

In most missions, the player will be required to build a base camp (any character can build structures) - they can then collect supplies - that may sometimes have upgrade items in random supply boxes - which can be found on the map. Among the structures which can be built are shelters for healing characters (Shelters, and Hardened Shelters which heal faster), nests for hatching friendly dinosaurs (Artificial Nest, and Incubator where the egg hatches quicker), High Hides for protecting characters, and buildings for upgrading character speed, eyesight, defence and attack power.

There are 12 missions in the game (except on the Easy level of difficulty, where the last two missions are left out). The game's plot only follows the movie plot very loosely - in Missions 1 and 2, Malcolm, Owen and Carr are on Isla Nublar (the island where the first Jurassic Park occurred), where they rendezvous with Sarah and obtain a DNA serum used to control dinosaurs that they hatch. A freighter then takes them to Isla Sorna (where The Lost World occurs) and crashes there in a storm - Kelly becomes available when it is discovered she stowed away with the other characters. Future missions are largely spent combating the hunters which are on the island - the hunters are hostile to the playable characters and will attack them on foot, using Jeeps, and tanks in later levels. In one mission, the characters must free a baby T. Rex (and other captured dinosaurs) from the hunter camp, then in the next, return it to its nest and free the mother, who has been captured by the hunters.

At Mission 8, the hunters blow up the heroes' communications transmitter (in a cutscene), so the focus becomes making their way to the Ingen Communications Centre (as in the movie) and radioing for help. This is done in Mission 11, and in Mission 12, the characters must all make their way to a helipad where they can be picked up. If these missions are completed, a bonus mission is opened where you play as the mother T. Rex in San Diego making her way to the freighter where her baby is, and combating hunters on the way.

The game features eight dinosaurs from the films, listed here in order of strength (health and attack power): Parasaurolophus, Compsognathus, Pachycephalosaurus, Dilophosaurus, Stegosaurus, Velociraptor, Triceratops and Tyrannosaurus. The game begins with just the first two, with stronger dinosaurs appearing in later missions. All wild dinosaurs (which wear white collars) are generally hostile to both the characters and hunters. However, the game features dinosaur nests with eggs (each nest looks different for each species), which after a DNA serum is collected in Mission 2, can be collected by the characters and hatched, producing dinosaurs wearing blue collars which can be controlled by the player. Herbivorous dinosaurs can replenish their health by eating plants, while carnivores do so by eating hunters or other dinosaurs. In the last three missions, the hunters become able to hatch dinosaurs of their own, which wear red collars and are hostile to the player. There are situations where wild dinosaurs can be lured or baited in to fighting hunters as they tend to attack nearby characters on either side, sometimes hunters also provoke them. This strategy can prove handy if facing a wild T-Rex and one of your scientists is being chased especially when gathering eggs or supplies. 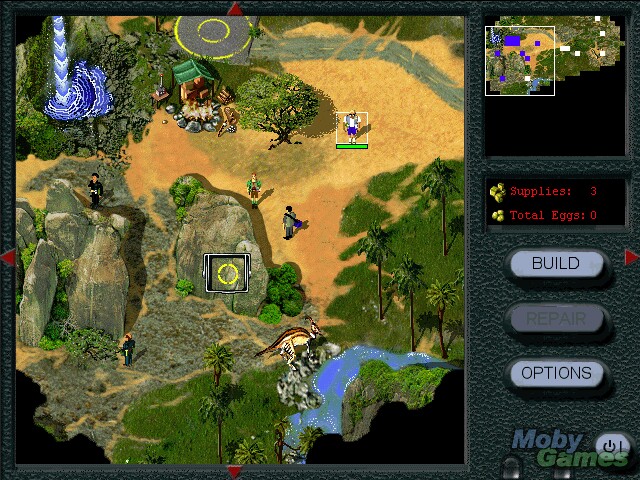 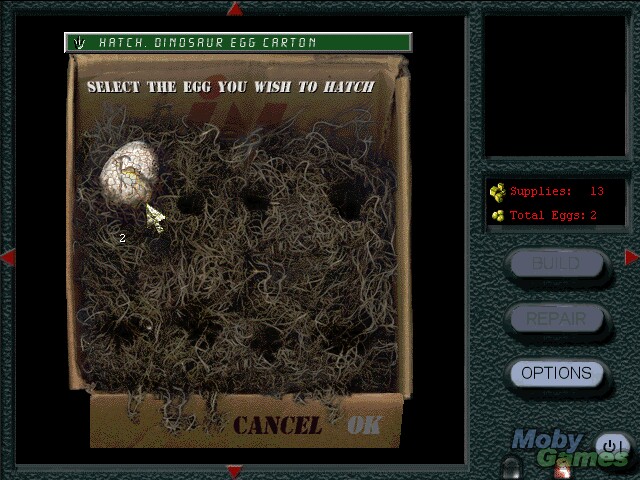