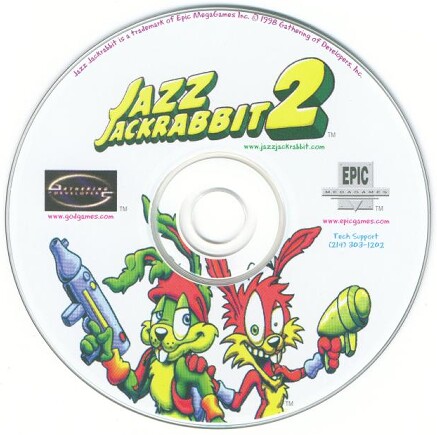 The Game
Jazz Jackrabbit 2 was a shot in the arm of 2D gaming. With smooth control, two distinct characters to play, and some of the funniest and freshest 2D level designs, monsters, and power-ups since 1995's Earthworm Jim, fans of the traditional side-scrolling platform game will not be disappointed.

This second installment once again pits Jazz Jackrabbit against evil genius and turtle Devan Shell. This time around, Jazz has the aid of his little brother Spaz. And he'll need it, because the stakes are high for all of rabbitdom. Malicious Devan has built a time machine and is racing into prehistory in an attempt to alter evolution's path and create a world without bunnies. Armed with an arsenal of goofy ironmongery, the Freres Rabbit are hot on his tail, er, trail.

Beginning in the present, the game works backwards in time. Each subsequent level reaches further into the past. The level designs are terrific. Colonial Chaos features swashbuckling tortoises, traditional pink Victorian architecture, and mother-in-law hippos who take no lip. Among the dozens of other levels are hell itself, a smurfy-looking castled Middle Ages, and the psychedelic "Purple Haze Maze" with hookah-smoking Afroed caterpillars, Mad Hatters with more than just lumps in their tea, and disappearing Cheshire Cat platforms. The same attention to detail prevails throughout: clean sprites, gorgeous flame and smoke effects, crisp parallax scrolling, and majestic backgrounds.

The projectiles are terrific. In all, nine different weapon power-ups are featured, from rubber balls that bounce off walls and rebound into your opponents, to pepper spray, to one of the laziest flamethrowers in the business. Most striking though are the individual personalities of the various enemies. The operative word here is cute. Strutting lizards with helicopter rotors strapped to their backs? Wait until you see how they walk. And hear them mutter.

We're talking Jim Henson cute. And if you tire of the original levels and monsters, the game comes with a level designer - perhaps a first in platform gaming - for fully customizable levels.

As Jazz or Spaz, you have dozens of moves at your disposal. In a sense the game plays like a "best of" platform game, with no startling new inventions, but more double jumps and dashes than you can shake a stick at. The two characters differ in their signature moves. Spaz has a dashing side kick and a traditional double jump. Jazz has a crouching super jump and a "helicopter ears" move that allows for slow descents, which when used in tandem work great to reach those difficult platforms. And when all else fails, there's always the good old butt stomp.

Control couldn't be easier to pick up or more fluid in action, as would be expected with any side scroller worth its mustard. Whether you're after speed or depth, the game can be successfully negotiated at a Sonic-esque velocity or patiently preened for maximum hidden-area riches. And there are plenty of secrets to be found. Again, all the classic side-scrolling elements are present. Collect coins to access bonus rounds. Blast through power-up-sensitive blocks to access secret areas. Collect french fries, pizza slices, burgers, and cans of soup for extra points.

Jazz Jackrabbit 2 doesn't offer anything new. What it does offer is a synthesis of previous platform greatness and sustenance. And great-looking sustenance it is. 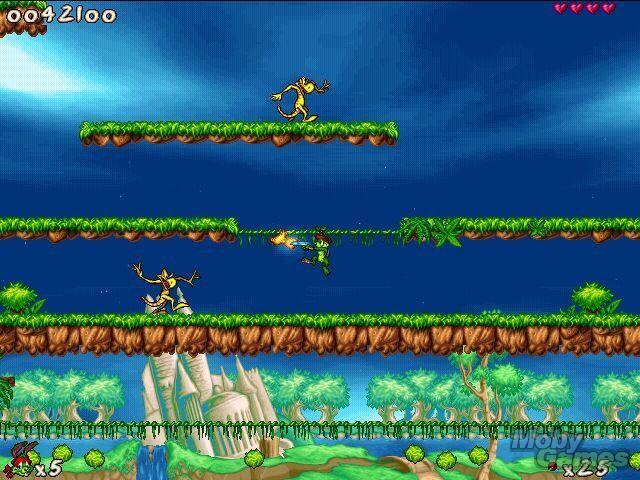 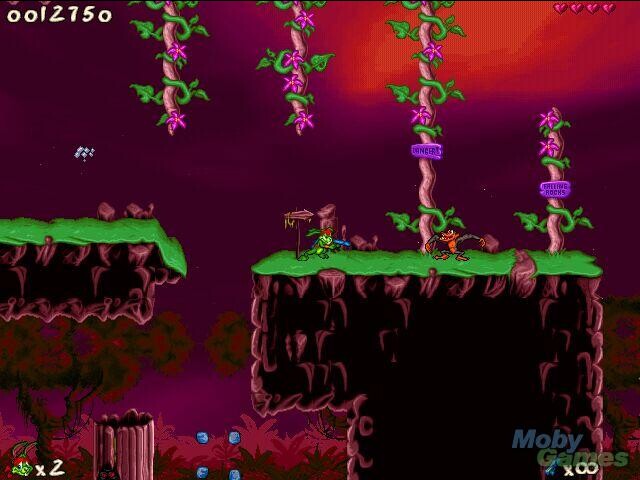