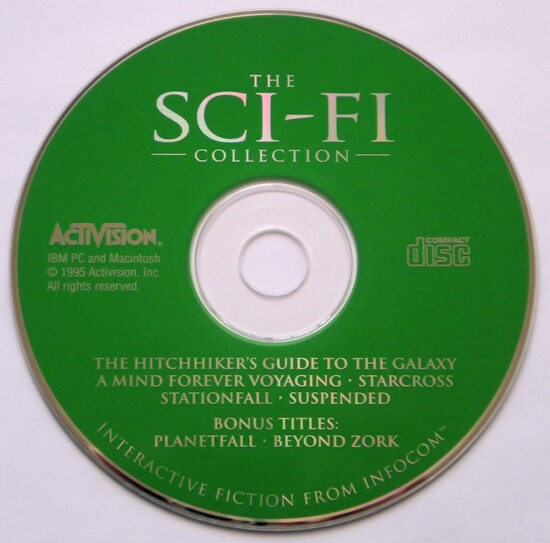 A Mind Forever Voyaging
This game doesn't attempt to boggle your mind with puzzles, that's not what the game is about. This game puts you into an interactive world that changes through the ages. The plot is magnificent; you are PRISM, the world's first sentient computer who is instructed to see if the President's Plan For Renewed National Purpose is a worthy cause, to bring the nation out of a state of chaos.

Beyond Zork
Beyond Zork is a tremendously enjoyable blend of traditional adventure and role-playing. You've got all the character interaction, parsing, and exploration aspects of an adventure combined with the challenge of manipulating objects for trade and fighting as well as solving puzzles. And, of course, you must develop your character or die in the attempt. The combination of the two styles gives a game of great depth, with numerous sub-plots, challenges, and diversions.

Starcross
In STARCROSS, you are a miner of black holes, scouring the asteroid belt in your one-man survey ship. Finding and harnessing a single black hole can make a person's fortune. It's a lonely business, fraught with the known and unknown hazards of space. You've equipped your ship, the M.C.S. STARCROSS, with the best gear you could afford. You've put everything into this venture, and though you've tried before, you somehow sense that this time will be different.

The ship's computer handles the functions of navigation and routine maintenance. You watch the sophisticated mass detector as it unceasingly scans the vicinity for uncharted masses. To assuage the tedium of your long trip, you browse through the compact tape library, a compendium of human knowledge and culture. But the drone of the ship gradually lulls you into a deep sleep. As you sleep, you dream of the riches which would be yours if your search for a quantum black hole is successful. Little do you suspect that the alarm on your mass detector is about to jolt you out of your dream - but not to grapple with the long-sought black hole. Your quest has taken an unexpected turn, for you are destined to rendezvous with a gargantuan alien spaceship from the outer fringes of the galaxy.

Stationfall
After the fall of the Second Galactic Union in 1716 GY, a ten-thousand-year dark age settled upon the galaxy. Interstellar travel was nonexistent, and many star systems descended into a near-barbaric state, buring coal and gas for energy, and growing food directly from exposed topsoil. In 11,203 GY, a treaty between the Empires of Tremain and Galium formed the Third Galactic Union. Ships of the Stellar Patrol (a pseudo-military wing of the Union government on Tremain) began exploring the galaxy, searching for the human civilizations that are the remnants of the Second Galactic Union. You are a native of the planet Gallium, one of the most politically powerful but culturally barren worlds in the Union. Your great-great-grandfather was a founding officer of the Stellar Patrol, and for five generations, your family has served in the Patrol. It was always taken for granted that you would sign up as soon as you came of age. Once in the Patrol, you discovered that the exciting career promised in all the Patrol recruitment brochures was nonsense. Your life was drudgery and demerits. The one time you got to see an exotic planet was right after a big parade, when they needed a detail to sweep up all the confetti. Then came your big moment: shipwrecked on a seemingly deserted world, you met an exuberant robotic companion named Floyd. Together, the two of you discovered the secret of that mysterious planet, Resida, and saved it from near destruction. As a result of your heroics, you were offered, and quickly accepted, a juicy promotion. Good-bye Ensign Seventh Class -- hello Lieutenant First Class! No more scrubwork! No more bathroom details! No more cleaning groth cages! Finally, your life in the Stellar Patrol would be as exciting as those brochures had promised! Oh, how naive you'd been. Your daily routine simply replaced tedious scrubwork with tedious paperwork. Since your planetfall on Resida, five long years have dragged by, without a single event worthy of note. Why, just look at today's "thrilling" assignment: scooting over to Space Station Gamma Delta Gamma 777-G 59/59 Sector Alpha-Mu-79 to pick up a supply of Request for Stellar Patrol Issue Regulation Black Form Binders Request Form Forms...

Suspended
You are the Central Mentality on an advanced semi-automated planet. You were supposed to sleep - in limited cryogenic suspension - for the next 500 years, 20 miles beneath the surface of the planet, while the great Filtering Computers maintained all surface systems. But the computers have taken you out of suspension because something is terribly wrong: the weather has become brutal, food production is dangerously low, and the Transportation System is malfunctioning, causing unprecedented accidents and casualties. The planet is in chaos.

You are physically immobilized. But you have six robots at your disposal, and you must manipulate them strategically to bring the Filtering Computers back into balance. Each robot has a distinct perception of the world and offers you specific abilities - one offers you sight; a second, hearing; a third, access to information in the computer memory banks. Through the robots, you must save the planet from destruction.

The Hitchhiker's Guide to the Galaxy
The Hitchhiker’s Guide to the Galaxy is written by Douglas Adams and Steven Meretzky and based on Adams’ BBC radio series, television series, and the series of subsequent novelizations. It’s one of the classic Interactive Fiction games produced by Infocom, labeled as Science Fiction and has a Standard Level of Difficulty. Though divergent from the source material, the main characters, locations, and concepts are here. Unlike the book, death can come quickly if Arthur fails to observe his surroundings, collect inventory, talk to people, and consult the Guide. DON’T PANIC! 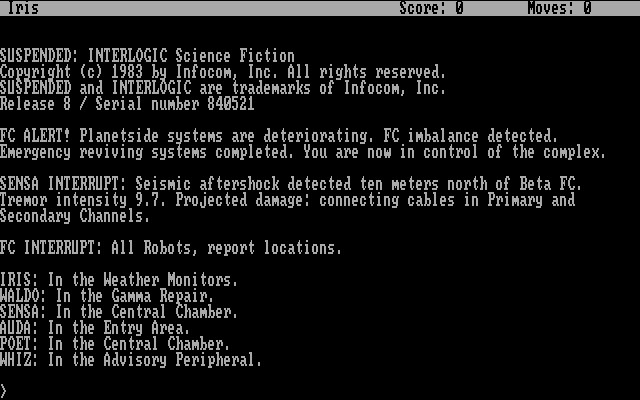