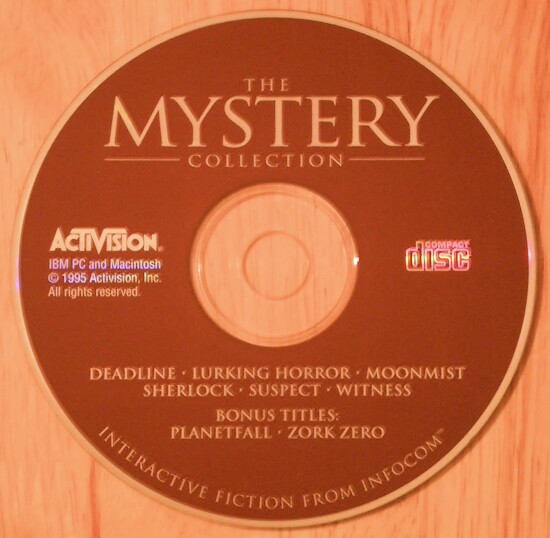 The Game
Deadline
You have 12 hours to solve the murder of Mr. Marshall Robner. If it was a murder... Mr Robner was found locked in his library, dead -- from a lethal dosage of anti-depressants. Friends and family are calling this a suicide of depressed wealthy industrialist. As Chief of Detectives, you find something just doesn't smell right about this case. You go out on a quest to find a suspect, his motive, method, and opportunity.

The Lurking Horror
In The Lurking Horror, you are a student at G.U.E. Tech. You have braved a snowstorm to get to the Computer Center and finish work on an assignment. But the snowstorm has turned into a raging blizzard, and has trapped you in a complex of buildings late at night. You are not alone, fortunely ... or perhaps, unfortunately. Thus you begin the story, unaware that anything may be wrong beneath or within the veneer of the quiet campus.

Moonmist
In Moonmist, you are a famous young American detective. An old friend, Tamara Lynd, has written you a letter (included in the package), asking for your help. And so you have travelled to England to test your detective skills. As the story begins, you are outside Tresyllian Castle - the old, dark, hauntingly beautiful castle where Tamara now lives. Tamara greets you, and you meet some interesting guests. But your visit soon turns to mystery, as a trail of riddles and clues leads you to a hidden valuable treasure. But Tamara is worried about a ghost that is tormenting her. What does the ghost want? Is it jealous of her? Does the ghost want the hidden treasure for itself? Or is the ghost a fake - just someone dressing up to frighten Tamara? If so, why?

Sherlock: The Riddle of the Crown Jewels
In The Riddle of the Crown Jewels, you play the role of Doctor Watson. You have received an urgent summons to the rooms of your good friend Sherlock Holmes by his landlady, Mrs. Hudson. Normally you are not up and about so early on a Saturday. But here you are, outside the Baker Street residence, and not a moment too soon; for the fog has thickened and travel without a lamp has become impossible.

Suspect
You are a suspected murderer and time is running out because the police are ready to throw the books at you. If you ever want to return to your normal life of being a reporter you better prove your innocence. However, the real murderer probably watching your every move -- so be carefull.

The Witness
The Witness is a text adventure in which the player takes control of a police detective working near Los Angeles. The year is 1938, and on this stormy February night a wealthy but frightened man has asked the detective for protection. In spite of his best efforts, a death occurs, and the hero has twelve hours to solve the mystery and try to arrest the killer. If the player thinks there is enough evidence against one or more suspects to convince a jury of their guilt, he can arrest them and conclude the case.

Zork Zero
Zork Zero: The Revenge of Megaboz is chronologically a prequel to the first three Zork games, and is a text adventure with a graphical interface and scene-based colors and borders. Like its predecessors, the game relies on puzzle-solving, including inventory item manipulation as well as logic-based puzzles. An interactive map, in-game hint system, and the included Encyclopedia Frobozzica are there to make the player's task somewhat easier. The game also includes four graphical mini-games based on popular logic puzzles. 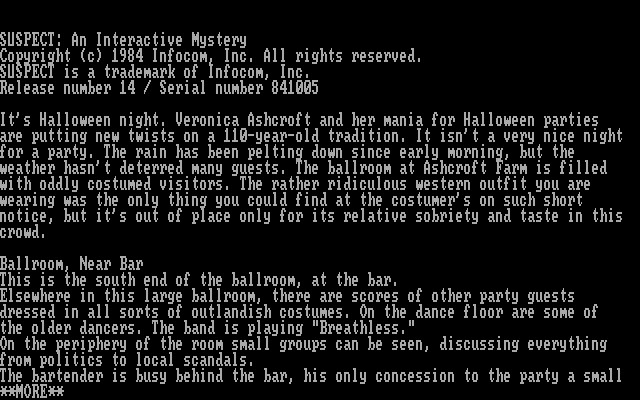