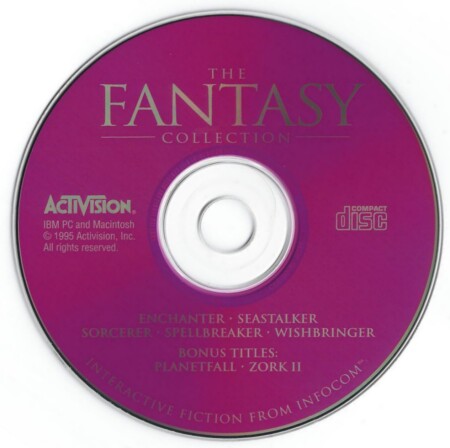 Actual Game
Enchanter
Part One of the Enchanter trilogy (Infocom 1983)
Difficulty rating: Standard
You are a dim ignorant Apprentice Enchanter, but your task is enormous. You must save the world from a Warlock who is ruling the land with his evil powers. When the wicked power of the Warlock subjugates this land, his magic defenses will recognize all who have attained the Circle of Enchanters!

You are not the first in this quest but hopefully you will be the first to succeed -- one yet unproven who has the heart to challenge and the skill to dare. You know the basics of magic and will have the chance to learn many spells. Keep your wits and use everything you can to your benefit. Know that you are the sole hope of this land, young Enchanter...

An interesting bit of trivia: This game was originally slated to be Zork IV and there is a sequence in Zork III that viewed a scene from this game as the future!

Sorceror
Part Two of the Enchanter trilogy (Infocom 1984)
Difficulty rating: Advanced
Your close friend and mentor Belboz is missing. Before his disappearance you noticed that he wasn't quite the same. Belboz could possible be the most powerful Enchanter in the land, and this worries you. You must find out what has become of your good friend. Hopefully his powers won't be used against you.

Sorceror uses the "waking dream" plot device, you dream a bit of your fate each day, a nice foreshadowing touch.

Welcome to the world of the Enchanter saga - a world founded on magic, where guilds of magicians have mastered the powers of sorcery; a world now threatened with destruction. You distinguished yourself among the young Enchanters by defeating the evil warlock Krill, whose attempt to subjugate the land was thwarted by your cleverness, as your inexperience allowed you to succeed where others might have failed. This earned you a place on the Circle of Enchanters, second only to the great Belboz the Necromancer.

Then Belboz himself was nearly destroyed, and your rescue of him from the evil demon Jeearr earned you the ultimate honor given a mage, the leadership of the Circle of Enchanters. Now, a crisis has befallen the kingdom. Magic itself seems to be failing. Spells fail to work or go strangely awry, the populace is confused and restive, and even the Enchanters Guild is baffled. A great conclave of the Guildmasters is ordained, and it is at this conclave that the final conflict between good and evil begins to unfold!

Wishbringer
(Infocom 1985)
Difficulty rating: Introductory
It's an ordinary day in your ordinary little town, and you've been performing your ordinary mail clerk's duties in an altogether ordinary way. But there's something quite extraordinary in today's mail. It's a ransom note for a kidnapped cat, and it will lead you through unbelievably harrowing adventures to Wishbringer, a stone possessing undreamt-of powers. For though the note in question is addressed to someone in your ordinary little town, it's postmarked for Special Delivery to Parts Unknown. And its true destination is somewhere beyond your wildest dreams, c/o the magic of Infocom's interactive fiction.

Wishbringer is a superb introduction to text-adventures, particularly those with little experience in the genre. This kind of game requires a relaxed imagination to enjoy the experience. As you read and let your mind wander you will picture your surroundings and plight -- that's one of the qualities that makes text-adventures unique and satisfying. Wishbringer is packed with hints and forgiving puzzles and was designed to increase your appetite for more!

Seastalker
(Infocom 1984)
Difficulty rating: Introductory
You must save the Aquadome! But is it in more danger form an inside traitor, or a vicious sea monster? As a famous inventor and and scientist, you will use your inventions and skills to save the day.

The alarm sounds and your submarine, the Scimitar, stands waiting. But not so fast - you haven't even tested the Scimitar in deep water, and the crew at the Aquadome may have a traitor in its ranks. So be careful! You have terrifying possibilities to consider, mysteries to unravel, life-and-death decisions to make.

Success won't come easily. It may not come at all - because if you challenge the deep without all your wits, you just might wind up as shark bait.

Zork 2: The Wizard of Frobozz
(Infocom 1983)
Difficulty rating: Advanced
Zork II is set in the ruins of an ancient empire lying far underground. In this classic interactive fantasy, you, a dauntless treasure-hunter, are venturing into this dangerous land in search of wealth and adventure.

Because each part of the Zork saga is a completely independent story, you can play the any order. In Zork II, you will explore a long-hidden region of the Empire, a region dominated by the Wizard of Frobozz. The Wizard was once a respected Enchanter, but when his powers began to fade he was exiled by Lord Dimwit Flathead the Excessive. Now bordering on senility, the Wizard is still a force to be reckoned with. Your goal, as you venture into the Wizard's realm, is to avoid his capricious tricks and learn to control his magical powers. Avoid Frobozz's, learn to control his magic spells, and a wealth of knowledge and power awaits you! 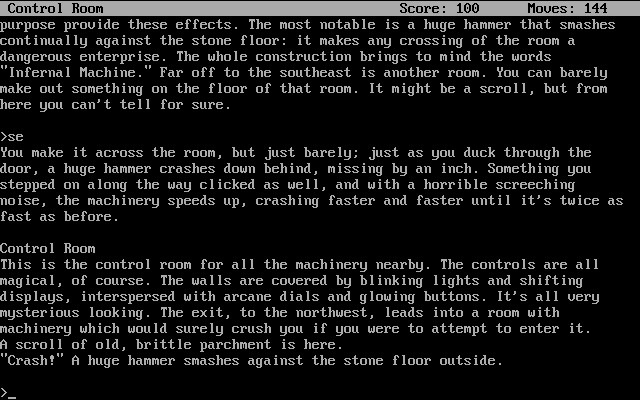