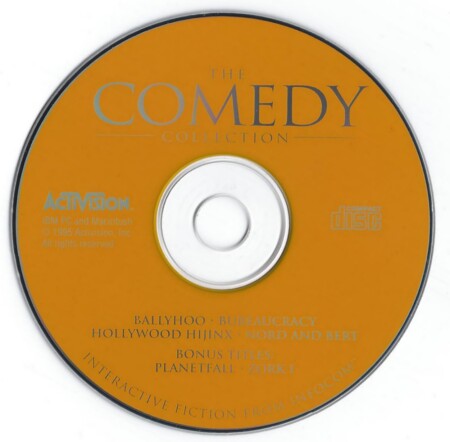 Actual Game
Ballyhoo
(Infocom 1986)
Difficulty rating: Standard
Spurred by your natural curiosity, you stick around after the show in the big top, hoping to catch an after-hours performance. Perhaps you'll get a peek at an impromptu clown act, or watch the late-night feedings of the exotic animals you goggled at earlier. But life at the circus isn't glamorous after the audience has gone home: instead of flashy feats, you overhear a mysterious conversation: a little girl - the circus owner's daughter - has been kidnapped! Her father is too naive (or is he too pompously stupid?) to do more than hire an inept detective to find her. He remains blindly loyal to his overworked performers, but... could it be an inside job? The girl might be hidden somewhere on the circus grounds... and one of the performers might be her abductor!

So you do what anyone would do in these circumstances: set out to rescue the damsel in distress. The odds aren't in your favor: you - a spectator, a bystander, an outsider in a defensive close-knit community - trying to find a girl you've never met, in a place you know nothing about, among bizarre people who want nothing to do with you. Some would call you brave. Some would call you foolish.

Every circus has its seedy underside. But few are as dangerous as this.

Bureaucracy
(Infocom 1987)
Difficulty rating: Expert
Once upon a time, a man moved from one apartment in London to another. He dutifully notified everyone of his new address, including his bank; he went to the bank and filled out a change of address form himself. The man was very happy in his new apartment.

Then, one day, the man tried to use his credit card but couldn't. He discovered that his bank had invalidated his credit card. Apparently, the bank had sent a new card to his old address.

For weeks, this man tried to get the bank to acknowledge his change of address form. He talked to many blank officials, and filled out new forms, and tried to get a new credit card issued, but nothing worked. The man had no credit, and the bank behaved like, well, a bank.

It's a sad story, one that gets replayed every day for millions of people worldwide. Of course, sometimes it's not a bank at fault: sometimes it's the postal service, or an insurance company, or the telephone company, or an airline, or the Government. But all of us, at one time or another, feel persecuted by a bureaucracy.

You begin in your new house. As per the letter in your package, you will fly to Paris just as soon as you get some money to take you to the airport. That money should be in today's mail, so you should be off soon... unless, of course, there's been some problem with the mail.

Oh by the way: The man in our story about the bank was Douglas Adams, the principal author of this game. The bank did finally send him a letter, apologizing for the inconvenience - but they sent it to his old address.

Nord and Bert Couldn't Make Head or Tail of It
(Infocom 1987)
Difficulty rating: Standard
In Nord & Bert you will try your hand at spoonerisms, those rascally transpositions of sounds by which you can turn a happy Sam into a sappy ham. Or try to hit the nail on the head with the right cliche. Be nimble and be quick when you come across a gadget that's jacketed in possibilities. Explore a house where every room literally has its own personality.

No bard is barred from using homonyms, if you write the right stuff and know now to find the bazaar in the bizarre.

And don't forget to act the part when you end up on center stage in a 1950's-style situation comedy.

As you probably have guessed Nord & Bert is one of the most offbeat released by Infocom!

Hollywood Hijinx
(Infocom 1986)
Difficulty rating: Standard
As a child, you spent most of your summers with your Aunt Hildegarde and Uncle Buddy. What memories! Uncle Buddy was a Hollywood big-shot, Aunt Hildegarde his loving (and very rich) wife. They had no children of their own, but you and your cousins loved their house, their parties, the Hollywood memorabilia, and them. Sure, Buddy and Hildy were a bit eccentric -- but that added to their charm.

Aunt Hildegarde kept the house when Uncle Buddy passed away. And now that she's suddenly died, you remember her unusual will. You will inherit the entire estate -- probably worth millions of you can spend just one night in the house and on the grounds, find a treasure or two. But if you can't then you inherit nothing.

And so Hollywood Hijinx begins with you being dropped off in front of a dark house, not too far from Hollywood...

Zork 1: The Great Underground Empire
(Infocom 1980)
Difficulty rating: Standard
You are about to experience a classic interactive fantasy, set in a magical universe. Zork takes place in the ruins of an ancient empire lying far underground. You, a dauntless treasure-hunter, are venturing into this dangerous land in search of wealth and adventure.

Many strange tales have been told of the fabulous treasures, exotic creatures and diabolical puzzles in the Great Underground Empire. As an aspiring adventurer you will undoubtedly want to locate the treasures and deposit them in your trophy case. You'd better equip yourself with a source of light (for the caverns are dark) and weapons (for some of the inhabitants are unfriendly - especially the thief, a skilled pickpocket and ruthless opponent.