The Game
In 1995 the creators of this interactive, story-intensive drama used their resources wisely, developing a good, solid script and thoughtfully crafting the interaction to create a sense of realism unrivaled in this genre.

Because of the distinct process that an attorney must follow when doing his work questioning witnesses, establishing motives, and linking evidence—crime-solving is well-suited for simulation through a logical cause-and-effect structure like the one used in this game. In The First Degree quickly teaches you how to think like a criminal prosecutor. In no time you'll be analyzing various characters' motives, and asking the right questions to make your witnesses reveal just enough information to incriminate the bad guys.

The case that you've been assigned centers on the murder of an influential San Francisco artist, and involves his community of family and friends. The game has two major parts: first, a pre-trial interviews segment, and then the trial itself. Ask the right questions of the witnesses in the pre-trial section without alienating or exhausting them, and there's a better chance they'll respond similarly in court.

The interface takes the form of basic dialogue selection in which you choose from a list of questions or comments. Unlike other games, In the First Degree won't deliver a desirable outcome if you just click liberally through the different lines of dialogue. In this title, you must size up your witness and make decisions based on character, tolerance, and other human traits. By adopting a more sophisticated structure, the game admirably simulates actual conversation and personal interaction, and adds a decidedly emotional slant. The writing is top-notch, the acting is consistently strong, and the result is a very realistic—albeit dramatic—experience.

The game has 'replay' written all over it: one would have to be extremely lucky to achieve the first-degree murder conviction after playing the game just once. Indeed, failing becomes invaluable, because it teaches you how to proceed the next time. You will quickly learn how crucial it is to ask the right questions (even during the pre-trial phase): select a wrong approach, and the witness will clam up, depriving you of a chance to get some helpful information. You will no doubt be replaying the interview sessions over and over again, trying out various questioning options in an effort to chart out the right path. The pre-trial phase allows you to jump back and forth among the interviews and other materials, so that by the end you have a clearly worked out courtroom strategy. Similarly, your experiences during the trial teach you which strategies you should adopt and which ones you should avoid. All this means that the entire game is a bit like a long learning curve that can be mastered only after several replays. Still, I have to admit I felt perverse glee when I entered the trial stage for the first time, without any clue as to what my case should be.

Playing this game is more like reading a good courtroom drama novel than matching wits with mind-bending graphic adventures; this originality and accessibility are what make In The First Degree a murderously good time. 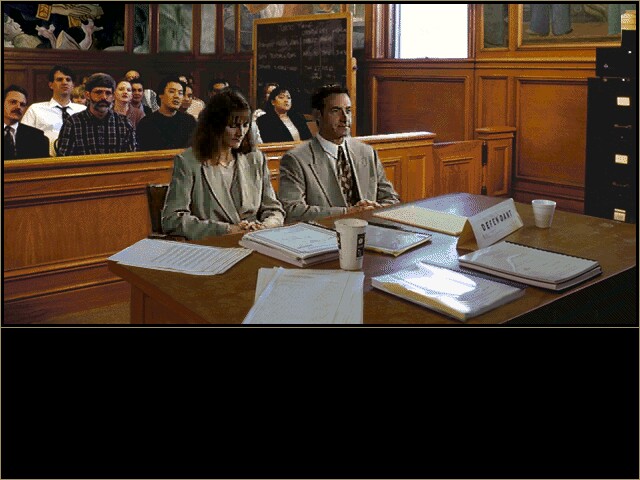