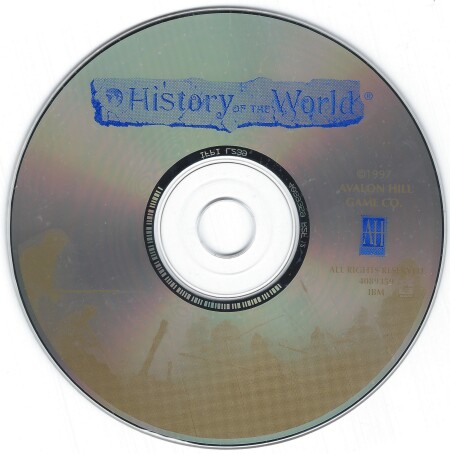 The Game
There have been many a kingdom rise and fall throughout the progress of mankind. Some had risen to power and remained for many years, while others appeared briefly and were swept away with the sands of time. In Avalon Hill’s History of the World, the player is given the opportunity to command the forces of seven of the world’s Empires which have appeared through the course of history, in an effort to dominate the world by the end of each game.

Gameplay in History of the World spans seven different Epochs of history, spread across ranges of years from 3000 BC to 1914 AD. In each Epoch, the player gains control of one of seven specific Empires that are made available during that Epoch. Each Empire has a predetermined starting Land in the Tactical Map, which is a map of the world distorted to emphasize the lands from Britain to Japan. Before the play in each Epoch begins, Empires are assigned to players in one of two ways. They can be assigned automatically by the computer, or they can be drawn individually by each player, examined secretly, and then either kept or passed to another player. This “Draw Phase” adds a significant strategic element to the game, as any player who receives an Empire passed by another player is required to keep it. In addition to a specific starting Land, each Empire also plays in a specific turn in the Epoch, each may or may not come with a Capital city, and each may or may not have Navigation capabilities. Capital cities are important, because holding them scores Victory Points (as described later). Navigation allows the Empire to place Fleet units in the oceans and seas, allowing the player to expand his Empire across the waters.

The key to success in History of the World is to acquire as many cumulative Victory Points as possible across the seven Epochs that are played. This is one of the reasons that control of Capital cities is important, because each Capital is worth two Victory Points. A regular City is worth one Victory Point, as is a Monument. A free Monument is built at the end of any Empire’s turn for every pair of Lands captured during that turn which contain Resource symbols. Only sixteen of the 92 Lands available to be occupied contain Resources, so the fighting for control of these lands will be fierce! One Victory Point is also scored for each Sea (not Ocean) that is occupied by a player’s Fleet.

In order to amass Victory Points and claim new Lands, players must make several moves during their Empire’s turn in each Epoch. First, the player is given an opportunity to play Events. There are a total of 63 Events in History of the World, which are divided into nine categories. Whenever a new game is started, each player is randomly given one Event from each of the nine categories. Although some of the events can be played during a player’s turn, a majority of them are designed to be played at the start of the turn. Events allow the player to create a Minor Empire, to cause a Disaster to occur in an enemy Land which would reduce the player’s Capital city to an ordinary City, or place additional armies in unoccupied territories, among other things. Second, the player uses the Strength Points assigned to the Empire he is playing to create military Units and Fleets, in order to attack the Units and Fleets of other players. In general, an attacking Unit is given two six-sided die rolls (outcome determined by the computer), and the defender is allowed one. The highest roll wins the Land being contested. The play of certain Events and an attack made across Difficult Terrain (across a Mountain, Forest, the Great Wall of China, or an attack of a Land from Sea or Ocean) allows the defender to roll two dice. There are certain Events which can modify the defender’s or the attacker’s die rolls by +1, as would the building of a Fort in a Land occupied by an Army. Each Army, Fleet and Fort costs one Strength Point to build, and once all of the player’s Strength Points are expended, he is prompted to build any Monuments he earned during that turn. At that point, the player’s turn ends and the turn is passed to the next player. 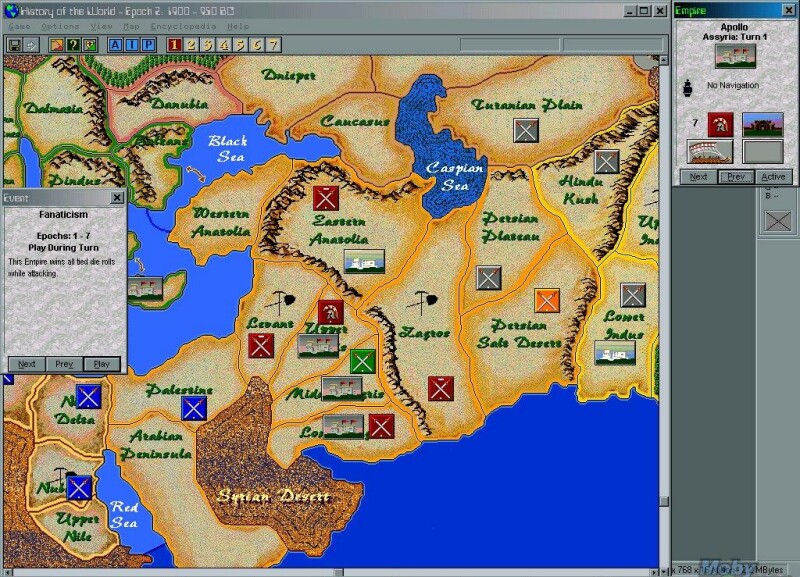