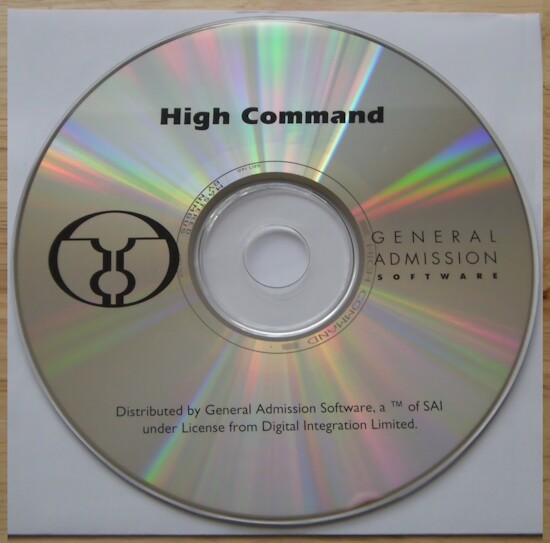 The Game
High Command is a grand game of war and resource strategy set in Europe in 1939. As either the Allied or Axis side, you will be fully responsible for all of the military, economic, and political decisions for your side. Should you allocate your resources to military units immediately or should you invest in your country's infrastructure first? Do you allocate resouces to sabotage or to negotiation? Once war is waged, the player has complete control over all land, air, and sea forces anywhere in the European theater. Playing as the Axis powers, the player truly has the ability to fight a completely different war if he/she chooses. There need not be an Eastern front if you decide against it. Economic options in High Command include production and research and development to give the player the flexibility to determine the course of weapons development and usage. Political options include diplomacy, intelligence, and foreign aid. Again, it's possible to develop entirely "anti-historic" alliances in WWII depending upon your decisions and goals. High Command also features flexible weather conditions, the ability to adjust Allied and Axis intelligence, and a also a strong computer AI.

The SVGA graphics are a vast improvement from the crude 320x200x16 EGA graphics of the first release of High Command. Remember -- 16-bit color did not exist for games in the early 90s. The tweaked version of High Command sports 256 color graphics at 640x480 and utilizes an icon-driven interface which makes playing and choosing options a breeze. One feature I especially liked is the ability to assign any of the game elements to the computer and just leave whatever decision making responsibilities that I choose to handle initially until my experience increased. This way the learning curve of the game is quite short and enjoyable.

Basic Game Play
Each turn represents one month. Each month consists of the following phases: production, air, naval, land, second air, second naval. The double-move for air and naval units works very naturally. Each phase is plotted simultaneously. This works very well, and gives each phase (the land phase most of all) an enjoyable guessing game aspect, as you have to guess where the enemy will be moving their land units.

All units, be they ground, air, or sea, have two ratings: size and organization. Units use up organization when moving or fighting, and recover it at the end of the turn. A small highly-organized force may defeat a large disorganized one. Also, different nationalities have slightly different proficiencies - a 5-point German armor is better than a 5-point Italian armor.

Units may split or combine; for example, an 8-point infantry may split into a 5, a 2, and 1. Since missions are assigned on a per-unit basis, it may seem like you should always keep all units at size 1. Resist this temptation! First of all, there's a limit of 18 units per hex. Second, you'll quickly find yourself overwhelmed keeping track of all those little units. Finally, sometimes you have to "shave" units to a particular strength. A 5 point transport, for example, can't transport 5/6 of a 6 point unit - make sure the 6 is split into a 5 and a 1 before the naval phase.

Production
As with most strategic games of this type, you can produce new combat units, as well as invest in non-combat production: R&D, economic stimulus, improving industrial production, A-bomb or rocket research, or diplomacy. All non-combat production follows a law of diminishing returns - the more you spend on it, the less return each additional unit of investment gives you. Each combat investment requires a certain amount of time to come to fruition (it takes longer to build an aircraft carrier than an infantry unit), and also a certain amount of no less than 6 different quantities: 1) industrial production, 2) ship-building production, 3) oil, 4) minerals, 5) materiel, and 6) money. Only naval units, for example, require materiel.

Diplomacy
You engage your diplomatic forces through financing. This is accomplished by picking a target country and throwing money at it. The more money you throw at it, the more likely that that country will become more friendly to you, but there are four qualifiers. First of all, different countries have different innate responsiveness to initiatives - Hungary, for example, is much more responsive to German diplomatic overtures than Belgium. Second, the enemy may also be throwing money at this country, which may well cancel your efforts. Third, larger countries require more money. Finally, there is a law of diminishing returns. A superb implementation for a wargame.

Air
There are 3 types of air units: fighter, fighter-bomber, and bomber. There are a variety of missions to which they may be assigned (ground attack, movement, etc.), and the "anti-mission" of CAP. CAP is an anti-mission in the sense that if any enemy air missions come nearby, they have to fight their way through the CAP. If they don't, they get bounced back to base and the mission is aborted. You may not have enough air power to blanket an entire front with CAP, so the simultaneous plotting aspect of the game gives air mission assignment a guessing game aspect - if you put all your CAP up north, and the computer flies all his missions towards the south, you're out of luck.

I also like the way that the game handles ground attack. Ground attack does not reduce the combat strength of the target - corps are not wiped off the map by ground attack. Rather, it disorganizes them. They'll have a harder time moving or attacking, and will be more vulnerable to a ground attack by land forces.

Naval
There are 7 types of naval units: subs, destroyers, cruisers, battleships, aircraft carriers, transports, and merchant marine. Transports transport combat units, while merchant marine transfers resources. Naval warfare is waged on two different fronts. First of all, there's the standard surface engagements. This works like air missions, with "naval patrol" being the analog to CAP. Other regular missions are shore bombardment, naval transport, amphibious assault, movement, etc. This part all worked fine, except that for some bizarre reason you can't do an amphibious assault into a port - you have to land next to it and then fight your way into the port. This has the (possibly intentional) side-effect of making Malta impregnable to amphibious assault.

The second front is merchant marine warfare. This is handled in a fairly abstract way. You delegate naval units to either escort or attack merchant marine in their current sea zone. Typically this is a subs against destroyer combat. Each sea zone then resolves merchant marine combat. Here again the guessing game comes into play - you don't know in advance which units he'll allocate to protecting his capability, or to attacking yours. They have also subtly designed into this system the advantage which occupation of France and Norway gave the Axis in submarine warfare. In order to attack sea zone X, you have to have units in sea zone X. If you have a port which fronts on sea zone X, the units never leave port - you just assign them to attack. If you have no such ports, you have to spend a month moving the units out there, and they can only stay "on station" for a limited time. As France/Norway have ports fronting on the Mid-Atlantic and North Atlantic, respectively, Axis ability to attack those zones improves when they take those countries.

Land
There are 5 types of land units: infantry, mechanized, armor, marine, and airborne (which is phenomenally expensive to build). There's really only one land mission - "move there". There are 6 impulses in the land phase, and units can move in as many impulses as they have movement allowance to support. Units are allowed to delay their movement. You can have your armor, for example, sit around for a few impulses, while the infantry (hopefully) punches a hole in the line. The armor then streams through into the rear in later impulses. Of course, the enemy may be reinforcing the line at that spot, or may be retreating. Here again, the simultaneous nature of mission assignment works very well.

This program does the best job of any simulation I've ever played at simulating blitzkrieg exploitation and breakthrough.

AI
The AI has two nice aspects. First, you can set not just the AI level, but also the AI personality, on a scale from "timid" to "reckless". As a human player, you can ask the AI to perform any part of your turn, on any turn. This is a great feature. If you don't want to bother with the production system, the AI will do it for you. If you don't understand naval missions yet, you can ask the AI to assign it. In this way you handle only those parts of the game which you feel like handling. Talk about a welcome relief.

Summary
If you are a dedicated wargamer you will notice there is a great game system at work in High Command. If you're a fan of boardgames like the Third Reich, World in Flames, or Europa boardgames, or Second Front style computer games, you might want to check out High Command. High Command was the first computer game I saw that really does capture, and capture well, an Avalon Hill boardgame style sim. 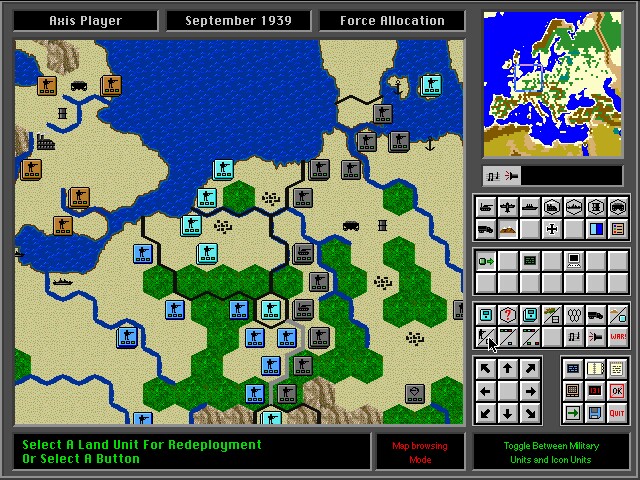 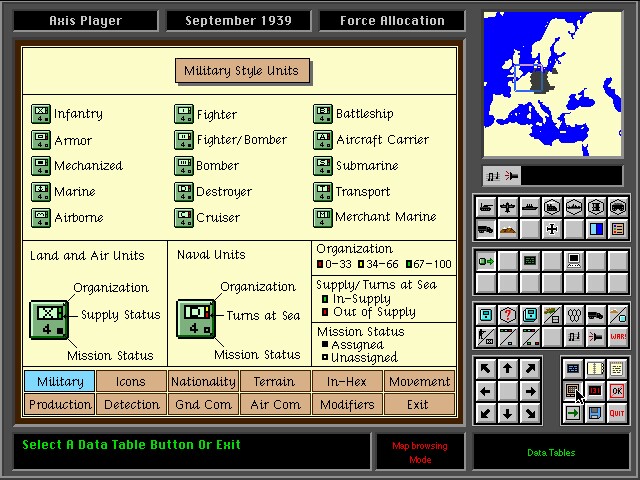