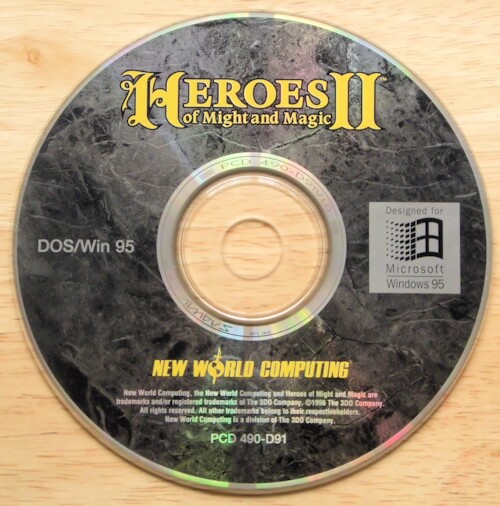 Actual Game
The Game
The original Heroes of Might and Magic was a great game for avid fantasy readers and D&D cultists because it fleshed out the pencil-and-paper universe they admired. Not only did it animate this universe, it made it strategically engaging, letting players pursue quests using carefully cultivated resources, army recruits, and spells. New World Computing has now released the sequel, Heroes of Might and Magic II, and while it still retains the same play structure as the original, the bundles of new elements in the game coupled with richer graphics and more detailed character animations were welcome changes.

Two new heroes - in addition to the classic Warlock, Sorceress, Barbarian, and Knight who show up again in Heroes II - are available for selection at the beginning. First is the Wizard, who's got a little more mana under his belt from the get-go, not to mention well-rounded skills. The second is the Necromancer, a dark character with the innate power not only to stomp his foes in battle but also to revive some of the battle casualties and enlist them - whether they like it or not - as low-level fighters in his army of the undead.

Both of these guys can command a den full of new, bizarre creatures. The Wizard cultivates everything from stone-slinging Halflings and terrifying Rocs, to scepter-wielding Mages and, well, big, mean Giants. The Necromancer begins his crusade with dime-a-dozen skeletons, either obtained from his castle or (as we mentioned before) revived from his enemies' dead bodies. Then he can start to enjoin higher-ranking soldiers such as Vampires, Lichs (whose projectiles also screw up the target's adjacent hexes), and Bone Dragons. Since the Necromancer's troops are all basically walking corpses, spells such as mind-control, bless, and curse won't work on them.

Like the first game, heroes rule over corresponding castles, each with its own distinctive buildings and background jingle ("background overture" might be a better term here, but seriously, who's ever heard of a "background" overture?). There are a lot more options associated with the castle than there were in the previous Heroes. For example, you can strengthen your castle's defense against enemies by mounting flanking turrets and setting up a moat. Your castle-defenders without long-range weapons can now advance upon attackers by lowering a drawbridge. Also, the new option of purchasing protective phenomena in each castle gives castle-defenders certain advantages over the enemy. Necromancers can create a storm over their castles, offering defenders more spell points; Barbarians can build a coliseum to boost the defending troops' morale. Need all your heroes to go out exploring and somebody else to hold the fort? You can now assign an ad-hoc captain to your castle to baby-sit while you're gone, bestowing upon your defenders the necessary spell powers.

Another big change is the addition of upgradable monster dwellings (buildings developed in the castle where you recruited your monsters). If a Necromancer buys the upgraded Mansion, his Vampires gain more strike points and can transform into bats, flapping over to attack the opposing army on the combat screen; upgrading a Wizard's Cloud Castle transforms ordinary Giants into bolt-throwing Titans. Warlocks can now upgrade their Green Dragons to Black Dragons which are…well, just steer clear of the Black Dragons.

The Mage Guild still has to be upgraded to gain access to more powerful spells and there's even a new fifth-level spell available in each guild. Spell memorization found in the earlier title has been replaced with "spell points," which heroes must accumulate and spend as spells are needed. "Spells?" you may ask, as you almost break your neck, swiveling your head with anticipation. Yes, there's a whole horde of new spells at your disposal in Heroes II. New adventure spells, castable while you're on the grand adventure map, include "haunt," which allows you to leave ghost-guardians in the mine of your choice, and "visions," which enables you to determine if any neutral creatures you encounter (such as medusas or genies) will join your ranks. There are also several new spells at the combat level. The "cold ray" lowers the body temperature of a selected stack of enemies to a deathly hypothermic chill; if you want to fight a little rougher, you can activate "chain lightning," knocking down several opponents like a line of dominoes. If you want to be exceedingly rash, you can send a hero in to use "Holy Word" or "Death Wave," universal damage spells which basically transform one of your dispensable heroes into a suicide squad.

In describing all the new features, we've overlooked Heroes of Might and Magic II's most striking improvement over the original: the graphics. The colorful animations of the first title, which were intriguing but still a little on the rough side, are now more robust and have higher frame rates. All the new animations - from shambling Zombies, to characters keeling over when killed - add more of an element of realism to the combat sequences. 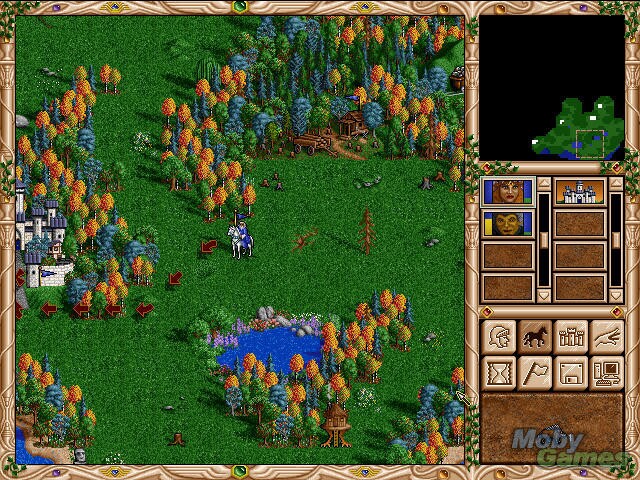 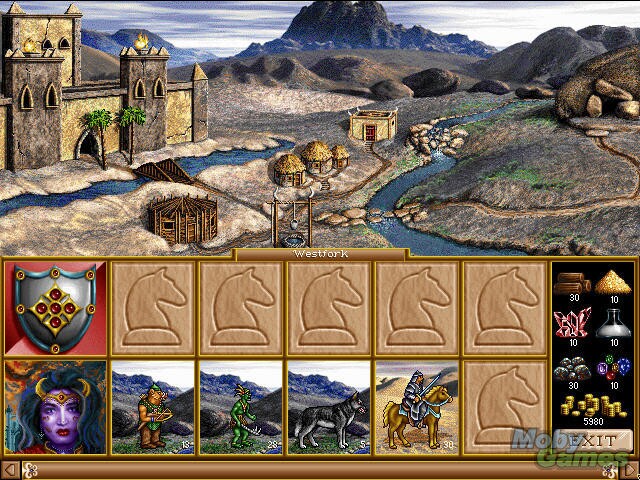