The Game
Heavy Gear, based on Dream Pod 9's rival anime-inspired giant robot pen-and-paper RPG, looks, sounds, and plays much like Activision's popular MechWarrior games, putting you in command of a powerful mobile suit loaded with devastating weapons and thick armor plating. Heavy Gear should have been an all-new game; Gears are much smaller than Mechs, standing a mere four meters in height on the average. They're supposed to be fast and agile, limited only by the flexibility and speed of their human pilots. But in Activision's game, you become a slave to the war machine you thought was yours to command, much how you might have felt in MechWarrior 2.

Heavy Gear looks sharp at first glance. Each Gear is rendered in careful detail and textured in dark camouflage, lending these massive mobile suits a look even better than their distant BattleMech cousins. Also gone is the flat, lifeless terrain of MechWarrior 2, replaced this time with rolling hills and plenty of boulders, cacti, and other such obstacles that can be used as cover in the heat of battle. At the same time, 3D accelerator owners can take advantage of enhanced frame rates and special effects including flowing clouds, lighting, and transparent shadows. But with or without a 3D accelerator, you'll certainly appreciate the unobtrusive green heads-up display, which readily displays your status and weapons loadout while outlining your target in color-coded wire frame to show how much damage he's sustained, and where. All this lets you keep a close eye on the enemy rather than fumbling for function keys to call up the proper damage display in the middle of a fight.

The audio is exceptional. From the bass-heavy stomping of your Gear's legs as it rushes into battle to the metal-on-metal clank of your rifle shots tearing into the enemy, you'll get a good feel for the combat through Heavy Gear's sound. All the while, a stirring, percussion-heavy synth-orchestral soundtrack adds that epic feel to each and every battle. But strangely enough, this soundtrack sounds rather like the scores that added so much atmosphere to MechWarrior 2 and Mercenaries. This big nod to Activision's previous future simulators turns out to be only the first of many.

For all intents and purposes, Heavy Gear plays just like MechWarrior 2. Mech veterans will have an easy time making the switch over to Gears, what with no longer having to worry about overheating or any such complications. Otherwise, even though Gears are supposed to be many times more maneuverable than Mechs, Heavy Gear feels almost as lethargic as did the Mech games at their worst. Other opportunities to capitalize on the smaller, faster humanoid Gear design were likewise passed up. A Gear can only carry a single handheld gun while the other arm dangles uselessly at its side; close-range melee weapons, which appear in the pen-and-paper RPG, are conspicuously absent. Gears can crouch, but they need to come to a dead halt first, which is a lot more trouble than it's worth most of the time. Likewise, Gears can sidestep, but this is only a trivial addition considering they can twist 180 degrees at the torso. Other elements of gameplay fare better; for instance, you can pick up spare weapons from the battlefield should yours run out of ammo. Each Gear has wheels, letting you move quickly from point to point or escape from battle in a pinch. Gears also have their own AI, which means you learn enhanced abilities as you progress through the game. A powerful blow will knock a Gear clean off its feet, leaving it vulnerable until it manages to clamber back to a standing position. A vast armory including missile racks, rifles, energy weapons, and hand grenades will keep you guessing on the battlefield and will get you thinking as you try to design the ultimate Gear from one of over a dozen stock chassises through the convenient drag-and-drop interface in the Gear Engineering Lab.

Heavy Gear offers two well-designed solo play modes, the first being a linear story composed of nearly three dozen missions. The story unfolds through beautifully rendered cutscenes in between missions and over radio communication during the missions themselves. The missions continue to surprise and contain enough variety to hold interest through to the story's conclusion. Throughout these missions, the computer-controlled opponents will have you outnumbered - but probably not outclassed. Even when you finish with the story mode, you'll find plenty to like in the less structured but equally enjoyable tour-of-duty game, which allows you to handpick your missions as you rise through the ranks on either side of a civil war. This mode offers a vast scope of the conflict as one side gradually takes the advantage over supplies, intelligence, and sheer numbers. But before you leap headlong into warfare, you'll want to run through the helpful training exercises, which will whip you into fighting shape within an hour or so.

With the exception of its lacking originality, Heavy Gear contains all the elements of a successful game and is certainly the finest game of its kind in many months. Of course, it's also the only game of its kind to be published in many months, which makes it a definite buy for those yearning for more giant robots since Mercenaries. Its similarities to MechWarrior 2 and Mercenaries ensure that fans of those games will also enjoy Heavy Gear. Heavy Gear will keep most mech sim fans busy for a good while. 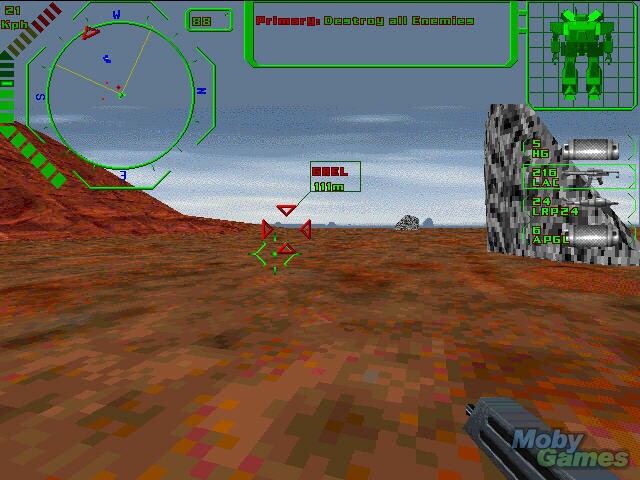