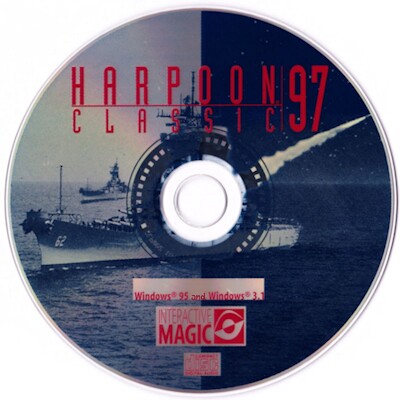 The Game
The arctic wind whistles across the deck of your ship, sitting in the frigid waters of the North Atlantic strategically guarding the coast. Your goal: Keep the enemy out of your shipping lanes. Your sonar reports a submarine attempting to sneak by to the south and to the east a fleet of enemy ships is heading in your direction. With an arsenal of more than 100 of the most lethal weapons at your disposal, you're ready to attack. Nothing will stop you from gaining control of the sea. Based on the original Harpoon, one of the most sophisticated and realistic contemporary wargames developed during its era, Harpoon Classic '97 offers strategic modern surface warfare with 50 new missions. With new displays, updated and additional scenarios, and a more intuitive interface, Harpoon Classic '97 takes all the realism of its predecessor and makes gameplay easier and more fun.

The original Harpoon was considered to be one of the best wargames available. It sported a dozen GIUK [Greenland-Iceland-United Kingdom] gap scenarios ranging from the very small to fleet battle-type engagement, was technically accurate, and fun to play. The 1994 remake, which included over 200 scenarios, improved on the original without losing any of the accuracy or fun.

Your role in Harpoon is that of fleet commander. Rather than deal with individual ships or planes, you command the entire fleet in various types of missions. Your goal for the mission could be hunting an enemy submarine, escorting a shipping convoy, or destroying a ground target. Once you have selected a scenario and options you start issuing commands to your units on one of several map and command windows such as the unit map, group map, strategic map, and report window. Most of the action takes place in the group map, which gives an overall view of your units, and of the entire battle. The unit map is used for fine-tuning attacks once you close with the enemy. Other windows provide specific information on units and status of the overall battle.

Each scenario is a real-time simulation that puts you in real life combat situations. You are set specific tasks to complete and given time limits to achieve them. Since Harpoon is an accurate simulation of sea battles, there are often long periods where you are simply moving your units into position or waiting for the enemy. Harpoon allows you to skip through these boring parts with time compression that can be set to up to 30 minutes of game time for each second of real time. If anything important happens, you are interrupted by an event window with the option to drop back to real time.

In addition to controlling ships and subs, Harpoon places you in control of a large air fleet including long-range sensor aircraft, attack fighters, bombers and helicopters. The helicopters, with their sonobuoys and dipping sonar, are the most effective ASW platforms available and the aircraft, such as F-14 Tomcats, are an indispensable part of fleet defense.

Harpoon includes an exhaustive library of information on the various units in the game, including function, weapons delivery, survivability and performance. The ships and subs in the game are the same as those in service today. Larry Bond, the creator of Harpoon, is a perfectionist when it comes to the accuracy of the simulation. Everything is as realistic as possible, right down to the range and accuracy of each missile or torpedo.

With all the complexity in Harpoon it could have easily been more tedious than fun to play, but the game is well designed, taking most of the bookkeeping away from the player and leaving you with the challenge of setting overall strategy. In addition, a comprehensive tutorial is included (it was not available in earlier versions), designed to acquaint new players with the interface. The tutorial scenario and comprehensive manual make learning to play this very complex simulation easy and fun.

Harpoon Classic '97 includes over 250 scenarios -- the original 200 from the 1994 Harpoon Classic and 50 brand new challenges. These scenarios span the globe, taking place in four distinct theatres: the GIUK gap, the North Atlantic, the Mediterranean, and the Indian Ocean. The size of the scenarios range from small single-ship encounters to huge fleet battles. In the largest there are often 200 or more units on the screen at any one time. Harpoon '97 also includes a scenario editor, allowing you to create your own campaigns with whatever force concentrations you like. Over 500 ships, submarines and aircraft are available in the game database, each accompanied by photographs, weapon/radar/sonar loadouts, and detailed descriptions.

The graphics in Harpoon are well done. The maps are detailed and accurate, the texturing of the land appears to be taken from satellite images at the default 1x zoom (the maps do suffer in quality as you zoom in). The markers used to display units are easy to see against the backgrounds and you can select display colors for the various map components. The graphics are dated (the animations for weapons launch and impact are simple when compared to recent releases in the genre), but they are more than adequate for the game.

With its realistic gameplay and improved interface and graphics, Harpoon '97 is the finest version of the 90s. It delivers a true-to-life experience and challenge for any level of expertise. The detail of the ships and weapons systems is impressive and the simulation is accurate, making for a deep and compelling strategy sim. 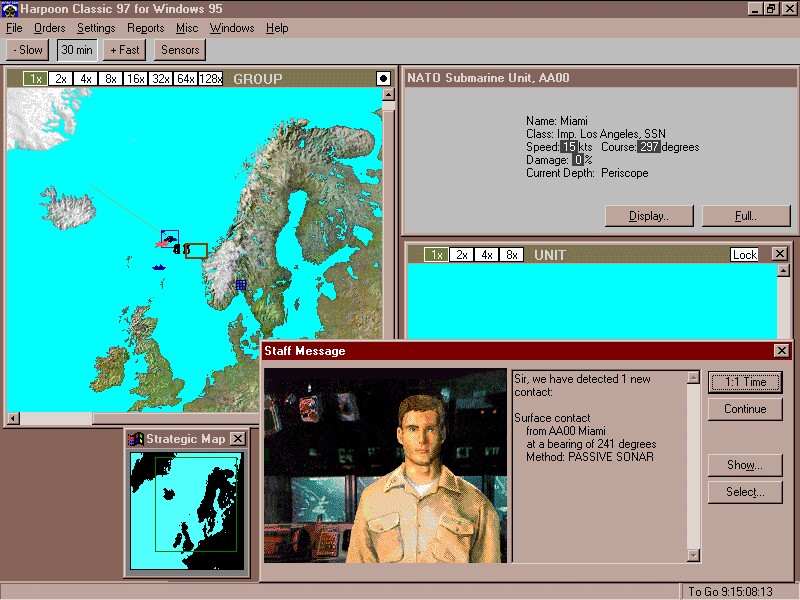 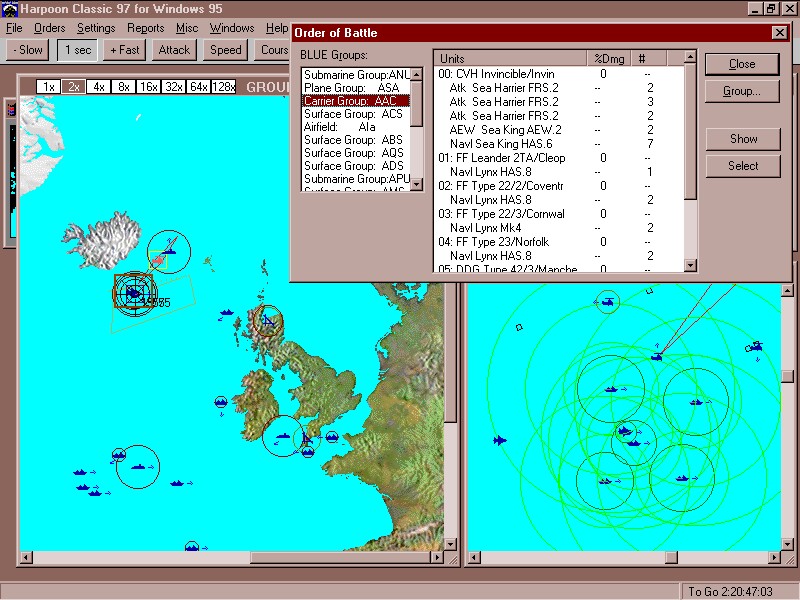