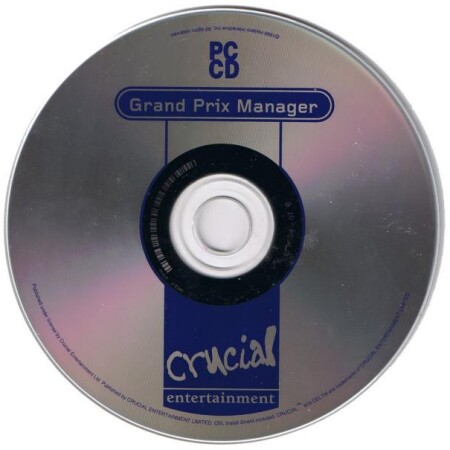 The Game
Wouldn't it be great to be able to step in to Frank Williams' shoes and manage the team? Or, how about taking over from Flavio Briatore at Benetton? What would happen if you hired Michael Schumacher for your Jordan team? How well would Damon Hill do if he drove for Ferrari? You'll have a chance to test out these and other scenarios when you play Grand Prix Manager.

You start off your F1 management career by choosing which of the sixteen racing teams you will take over. The rookie player may opt for managing the wealthier teams like Williams, Benetton or Ferrari, while the seasoned pro will find more challenge in bringing more financially modest teams like Simtek or Tsunami to the constructor's championship. You are charged with managing all aspects of the racing team, from personnel to finances. Based on which team you choose to manage, you will start the season with anywhere between $1,000,000 and $10,000,000 to work with. It seems like plenty, but you'll find it's all gone unless you manage it properly.

Before you take your team to the first race, you need to negotiate contracts for engines, spare parts, tires and fuel. As expected, the better the part, the more expensive it is. However, manufacturers of these parts tend to offer better deals to teams that do well. So, teams like Williams and Ferrari get free engines while other teams have to pay upwards of $1,000,000 per engine.

Once you've chosen your optimal combination of suppliers, your best bet is to do some testing on your car. Like most everything else in the game, testing the car is not free. You'll need to pay at least $2,000 for every lap your drivers take around the track. Testing the car allows you to play around with the car's setup, but can also benefit you by giving the drivers more experience on the track and in the car.

Once you're happy with the current car setup, it's time to start thinking about next year's car. That's right, you haven't even had one race and you're thinking about next year. Research and Development takes a long time in the racing world, so if you want to be anywhere near competitive next year, you'd better hire some good engineers and mechanics to do the work.

Now, finally, you're ready to race! A click on the "race" button transports you to the Interlagos circuit for the Brazilian Grand Prix. Just like in real life, your drivers are given the chance to familiarize themselves with the track in a practice session. This is also a chance to play around with the car's setup before the qualifying session begins.

Your setup options are numerous. Depending on the design of the track, you may want to adjust the wing setup. For example, on a fast track, you might adjust your front and back wings down to 10 degrees. On curvier tracks that require extensive downforce to keep the car on the road, adjust the wing settings to a higher angle. Each of the 16 tracks you'll race this year will require a different setup. Other than wing setting, you can adjust the fuel capacity of the car, change the gear ratios, change tire compounds from soft to hard, etc.

Once you believe you've got your car setup right, it's off to the qualifying round. Each of your drivers is allowed a maximum of 12 laps for each of the two qualifying sessions. A good idea for the qualifying round is to make the car as light as possible by only having enough fuel for a few laps and to have your drivers go all out. If you're fortunate, your drivers will qualify high in the starting grid. If not, they'll have a lot of work to do to have any chance of scoring points for the team.

Now the moment you've been waiting for.. the race! You must choose the tire compound that will best suit your needs, decide on a pit strategy and load the car up with just enough fuel to make it to the first round of pit stops. Many F1 races have been won by having the best pit strategy. If you feel your car is fast enough, even with a full fuel tank, you might want to opt for a "one stop" strategy. But if you're a little slower, maybe a lighter car with fresh tires might provide an advantage. Now, you give orders to your drivers and the race begins.

As the race progresses, your strategy may change. If your drivers are too conservative on the track they'll quickly find themselves out of contention. But if they're too aggressive, they risk crashing. Also, if it starts to rain, you may want to call your drivers into the pits to put on some rain tires.

Once the race is over, hopefully you'll have finished on the podium. If you do, you car is inspected by FIA officials. If you're using any illegal equipment, you can be fined heavily and will lose any points you gained during the race.

Now, it's time to get back to money matters. Managing an F1 team is lots of fun, but it's really expensive. Prize money alone won't make you enough money to survive the first season. You need sponsorship. You must get your marketing staff to approach companies to sponsor your cars. You're given a list of potential sponsors, you must chose one or two of them for your staff to concentrate on. If you perform well in the races, and you've chosen the right company to approach, you'll soon have sponsor's decals stuck all over your car.

Some neat editing options are available. For example, you can change the names of the drivers for each team to match the 1996 drivers; rather than the 1995 drivers provided with the game. You can also edit your team colors, logo and of course, name.

Game play is easy enough for the novice player to enjoy his first time out. The game is difficult, and will present a challenge to even hardcore race fans. GPM is right up your alley if you enjoy games that require you to think before you make a move. Racing fans, especially F1 fans, will certainly enjoy managing their favorite team and drivers to the F1 Championship. 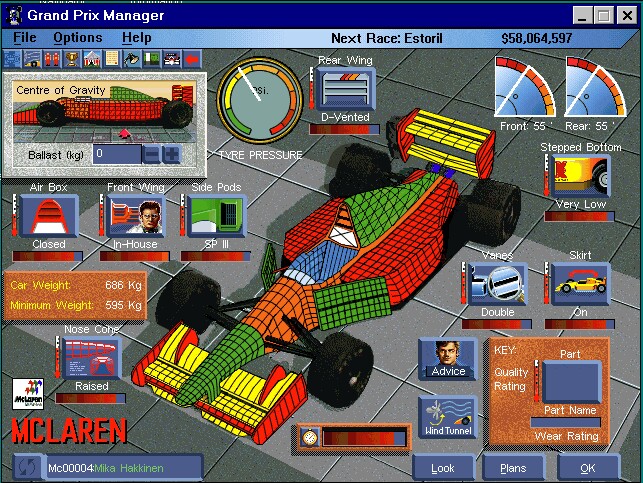 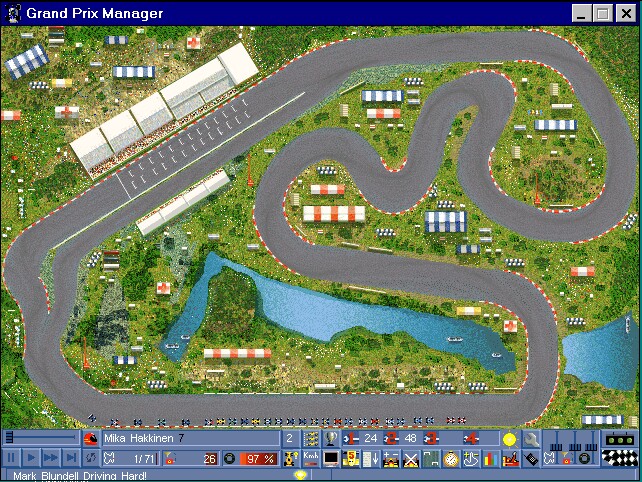