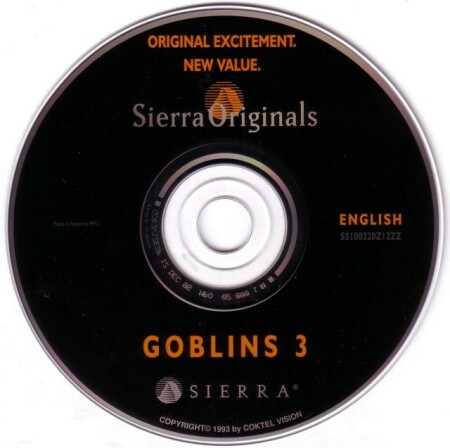 The Game
Goblin's Quest 3 is the third and final game in Coktel Vision's Gobliiins (or Goblins) series. In many ways, it is the most unique installment as well. Released in the US shortly after Sierra On-Line's acquisition of Coktel Vision, its influence over the game is apparent by the addition of the word "Quest" in its title—though the game bears little resemblance to the classic "Quest" games that Sierra On-Line is known for. An earlier version of the game has also been released in Europe by Coktel Vision, but under its original title, Goblins 3.

The game's introduction makes no mention whatsoever of a king or a prince that needs to be helped or rescued. Instead, you are shown a humble goblin named Blount, who slumbers peacefully in what looks like a ship's cabin, oblivious to the fact that the craft is rapidly being abandoned. Once he finally awakens, you discover instead that he is on a flying ship sailing through the sky, which is being pummeled by a shower of large boulders. Unsurprisingly, your first goal of the game is to help Blount to find a way off the ship, which is, of course, hardly a simple task.

You eventually learn that Blount is a reporter who is on a mission to find and interview Queen Xina and King Bodd. As in previous games in the series, this story is discussed in much greater detail in the manual. Apparently, each of the 2 unwed monarchs reigns over a separate kingdom, and these kingdoms have competed fiercely to solve a mysterious labyrinth, for legend states that whoever solves the labyrinth first will bring eternal good fortune to his people. Unfortunately, the labyrinth's guardian has recently died, and both the key to the labyrinth and his daughter have mysteriously vanished.

There are many twists and turns on Blount's quest to interview both rulers. On the way, Blount falls in love, dies and has to resurrect himself, discovers his hairy and violent alter ego, spends some time as a giant and a dwarf, dabbles in magic, and has to face his greatest fear of all—spiders. This is probably the most bizarre game in the series.

Although there are 3 controllable main characters in the original Gobliiins and 2 controllable main characters in the sequel Gobliins 2: The Prince Buffoon, there is seldom only 1 controllable main character in Goblin's Quest 3. Though Blount starts out very much alone, he is soon joined by Chump, a fat green parrot that can barely fly. Chump cannot pick up or use inventory items, but he is still indispensable in solving a number of puzzles. Although Chump disappears later in the game, he is soon replaced by Fulbert, a friendly yellow snake. In fact, there are several such sidekicks to be found throughout the game. To mix up the gameplay even more, Blount is not even the only main character. Over the course of the game, you play not only Blount, but Wolfy, his alter ego; Wynnona, his love interest; and even his shadow. There are even a few screens in which you control Blount's hands, with each hand acting like a separate character and reacting differently with various objects.

The interface for Goblin's Quest 3 is pretty much identical to that for Gobliins 2: The Prince Buffoon. Left-clicking on a location will make your character walk to it, left-clicking on a hotspot will make the character interact with it, and right-clicking brings up the inventory window. A number of buttons appear in an icon bar along the top of the screen: the Control Panel button, which allows you to save or restore a game or quit; the Joker button, which provides hints for certain screens; the Inventory button, which brings up the inventory; and the Options button, which lets you turn the music on and off and check the date and time. There are also 2 buttons unique to this game: the Goblins News button, which shows you a news story written by Blount that contains information relevant to your current situation; and the Map button, which shows you a map of the entire game world, points out where you currently are, and summarizes what you must do in order to progress to the next screen.

The graphics in Goblin's Quest 3 are pleasing to the eye, and the unique cartoon style still manages to expertly balance itself between cute and disturbing. A major improvement of the graphics in this sequel is the quality of the cut scenes. In previous games, nearly all of the in-game cut scenes consist of a single image with voiceovers or sound effects (or both). In this game, however, almost all of the cut scenes are fully animated, and they look quite impressive.

The music in Goblin's Quest 3 is much like that of its predecessors: mostly ambient sounds are intermingled with a variety of melodies, peculiar sound effects, and occasional silences. However, sometimes the music does not seem to fit the locale very well. In fact, when transitioning to another screen or cut scene, sometimes the music does not change at all. For example, when Blount is on the ship in the beginning of the game, the music is very peaceful and quiet, and when Blount leaves the ship and crash-lands in a barren place swarming with hostile creatures, the same peaceful music just keeps on playing.

The puzzles in Goblin's Quest 3, like most puzzles in the entire series, are unusual and challenging, and they sometimes require a bit of trial and error in order to solve. Like Gobliins 2: The Prince Buffoon, a number of the puzzles in Goblin's Quest 3 require teamwork to solve: for example, Chump will need to pull on a rope somewhere on the screen which lifts an umbrella out of a hole, while elsewhere on the screen Blount will need to pick up the umbrella before Chump lets go of the rope. While some of the puzzles are relatively straightforward, many of them are difficult and somewhat illogical. The puzzles start out easy, but they slowly get harder as the game progresses. To make matters worse, a number of the puzzles require exact timing and multiple actions to be carried out in order to complete them. Still, the wide variety of locations and characters helps puzzle solving from becoming too tedious.

In summary, Goblin's Quest 3 is a great finale to a great series. Though it seems considerably different than previous games in the series at first, all the elements are neatly tied together near the end in a plot twist that is strongly reminiscent of the plot twist in King's Quest III: To Heir is Human. Though Blount has no other imps accompanying him on his quest, he still has no shortage of friends (or enemies) and is a memorable and lovable character, despite his flaws. 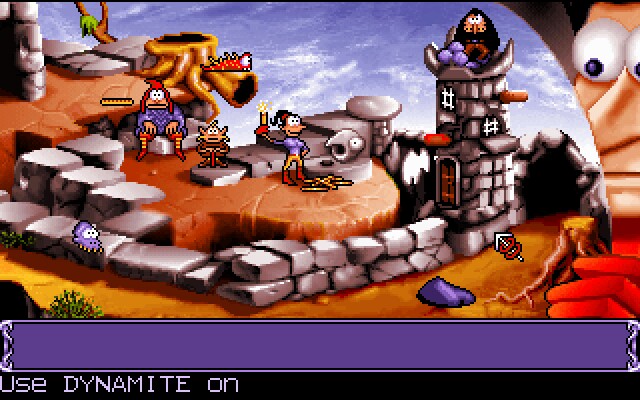 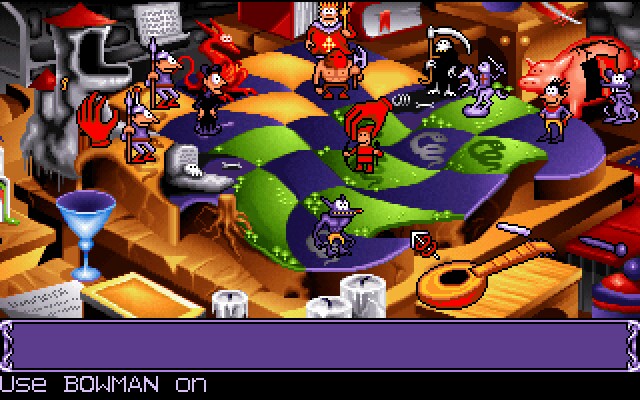