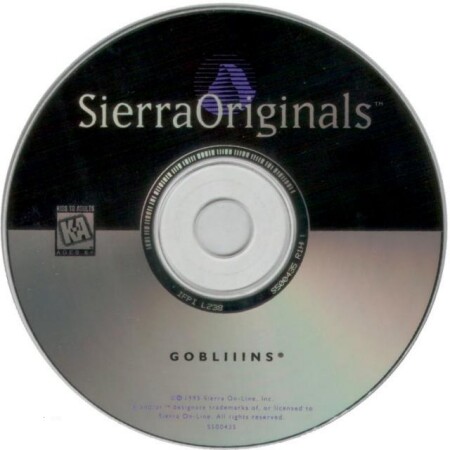 The Game
I remember the morning my niece, then four years old, made the first step out of the egotism of the toddler years and grasped a higher human truth. Two Sesame Street furries, the Geeple and the Gonk, were in a dilemma. In a tree, high above their heads, hung a delicious fruit which neither creature could eat. The Geeple had arms naturally stuck high above its head; while the Gonk's arms were stuck down below its waist. The Geeple could pick the fruit from the tree, but it couldn't bring the fruit to its mouth - while the Gonk could hold things at mouth level but couldn't reach the fruit. The two independent characters thought a moment and struck upon an answer - cooperation! Through a series of contortive maneuvers they found that each could taste the nectar of shared victory over their cruelly conceived genetic endowments. Geeple! Gonk! Nectarines.

Like these Sesame Street characters, the Gobliiins of Coktel Vision creation have set out on a task that only the cooperative use of then individual talents can accomplish. You see, the king of the Gobliiins is being terrorized by a mysterious voodoo-magician prankster. The silly animated introduction to the game shows the poor king poked, prodded and terrorized into a psychotic state, to the horror of his previously peacefully dining family. Three Gobliiins stooges, Hooter, Dwayne and BoBo, have been sent out in search of the wizard Niak, whose magic could counteract the voodoo curse and restore the king's state of mind. This Gobliiin Quest will take the zany trio through a dozen or so puzzle-filled screens of the standard Sierra graphic adventure style. Mastering the puzzles on each screen requires the use of each Gobliiin's gift.

Hooter, a graying lesser magician, casts a general sort of spell that has unpredictable effects. BoBo, a horn-helmed ruffian, is a pugilist and all-around athlete who can climb ropes and land a solid right jab when required. Dwayne, a spry young technician, is the only one of the three that can pick up items and use them appropriately. Thus, with a punch, some item manipulation, and a little magic, the Gobliiins are on their way.

When the Gobliiins find themselves on a new screen filled with items, creatures, and pathways they have little to tell them what exactly is the goal they seek - so, a little exploration is in order. The player will pick a character by clicking on him and proceed to punch, zap, or pick up everything he can. Sometimes this hunt-and-click procedure yields fruit a new object or a change in the environment-and the overall gist of the screen's puzzle will begin to unfold. More often, the Gobliiins will end up doing something silly, like causing something to fall on their head or invoking the wrath of some creature or another.

Like the old "Three Stooges" short subjects, it is not only the offending Gobliiin who reaps whatever punishment is due, but the whole lot of them ends up paying the price. You see, the group has a general allotment of collective energy, represented by a bar on the screen, and when one member screws up, the energy is sapped. When this karmic well has run dry, the level is over and must be started again. This is one world where one does not want to use the Force.

When one Gobliiin commits such a flub, the others in the group don't hold it against him. No, they hold it against you, the player. They realize that the player holds the puppet-strings and they'll let him or her know what's on their minds. They'll gesticulate wildly, hold fingers to their heads to encourage the player to think, and non-verbally plead with the player to get his or her act together. While the player takes their advice and carefully considers the situation, these goofs will wait impatiently for the next move - yawning, shrugging their shoulders, turning back flips, chewing gum, playing with yo-yos and whatnot. These antics are too cute.

The world of the Gobliiins is a cleverly created one. The puzzles mostly involved discovering strange contraptions in the bizarre fantasy landscape which will enable the Gobliiins to bypass some obstacle. Most steps toward a puzzle's solution are accompanied by a short, simple and funny animation, and one can always be sure of getting a non-verbal haranguing after every wrong step. Interacting with the Gobliiins is quite easy; facilitated by an interface very much in line with the Sierra protocol of the era. The game is entirely mouse-driven and the individual actions of the Gobliiins are represented by different mouse icons (a fist, an arrow, an open hand) which the player can cycle through by clicking the right mouse button. A good deal of work has been done to ensure that the player can make a single click with the arrow button and thereby move a Gobliiin to any point on the screen, regardless of whether he will have to walk in a straight line or traverse an intricate path of several ladders. A small feature, but appreciated by those who have played the earlier graphic adventures without such "path tracing."

The overall feel of Gobliiins - it's simple interface, it's click-around exploratory nature, the goofball antics of the trio and the silly animations that abound in their world - suggests a younger audience appeal. However, many of the puzzles can be quite sticky, and some require a very careful eye - occasionally causing even this salty gamer to pause and think. Younger gamers might get a bit frustrated going this one alone, but the game would make great "lapware," where the older garner makes suggestions about the next move and the younger does the clicking and enjoys the animated results. This is not to say that older gamers won't get anything out of Gobliiins - far from it. There is plenty of good fun here for the graphic adventurer enjoying a respite from the more plot intensive quests.

Hooter, Dwayne and BoBo will entertain a variety of lighthearted gamers so long as these players remember that cooperation is the name of the game, and that the best fruits of labor are those that are shared. Nectarines indeed. 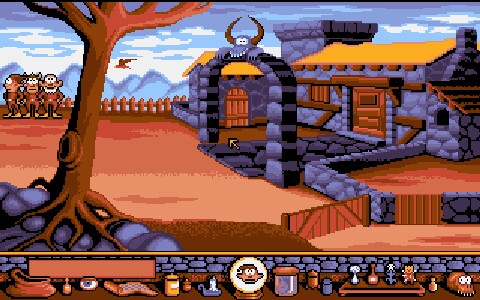 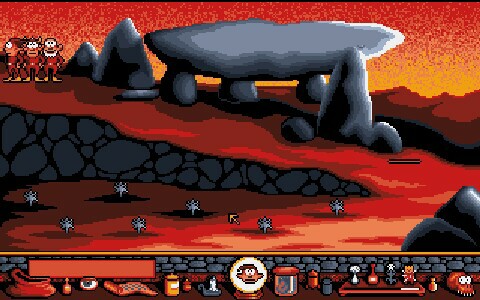