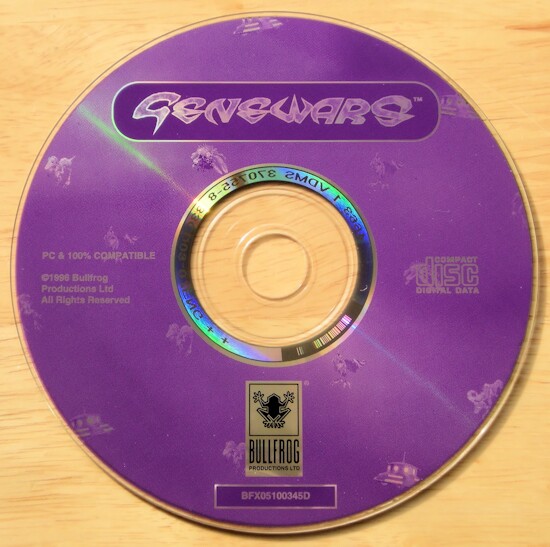 The Game
In Genewars, instead of destroying your enemy to conquer its territories as you can logically expect in any strategy game, you will have the odd task to rebuild entire biospheres. The story behind this is nothing but surprisingly original. As humanity evolved and learned how to travel in space, humans finally encountered other life forms. The exchange of civilities didn't last long though, and soon, the entire galaxy became a gigantic battlefield in which the four races were systematically destroying all life on every single planet, only leaving behind the burning ashes of thousands of years of evolution. It is most probable that all life would have been eradicated if the captain Jean-Luc Pontiac of the Bohemian race didn't try to blow up a black monolith floating in space. The strident signal it emitted after having reflected the beam on the ship, was not only announcing the return of these advanced beings that are the Ethereals, but also a new future for the survivors of this galactic carnage.

Confronted by the ecological disaster left by this infamous war, the Ethereals condemned the survivors to recolonize the planets that were decimated during the conflict. To be certain the four races would not represent a danger to their environment, the Ethereals stripped them of every negative traits through a very efficient method called "the Adami Process." Furthermore, they provided them with enough technology and the knowledge of the GOOP, a highly carbon concentrated material, to carry out their mission. The promise to reverse the Adami Process for the best colonization team was much more than a motivation; after all, how many have the possibility to start all over again?

From the inter-planetary navigation screen, you will see the next planet that the Ethereals ordered you to restore. At first, missions will consist of simply building a few structures, making them work to produce energy and GOOP, and sending your specialists to research fauna and flora. Four different kinds of specialists are available: engineers, geneticists, botanists and rangers. Engineers will be required to construct, repair/upgrade, and destroy structures; geneticists will research new animal species, heal other specialists and creatures, and stun animals; botanists can plant and harvest seeds, and also cut down plants; finally rangers can encourage mating, fighting and feeding while also being able to stun and even kill creatures. Beware that some actions such as deforestation or killing creatures may not please the short tempered Ethereals!

Until you reach the fifth level, you won't be allowed to choose your colonization team. The first missions will have you playing with up to four members with which you will learn progressively the game basics. Once you reach level five, you will have to choose your crew members among a selection of specialists of different races. Besides humans or Earthlings if you prefer, you can find representatives of three other races: the Saurians, Bohemians and Schnozzoids. Each race is characterized, other than by the obvious physical appearance, by two factors that are maximum ability and strength, and also by a characteristic, negative or positive, according the race. To give an example, while Bohemians can only achieve 65% of maximum strength and 75% of maximum ability, they heal quicker than any other race, and are less subjective to attacks from animals.

Along the 24 different planets on which you will need to restore the ecology, you will encounter various biotopes ranging from semi-arid to tropical environments. In each, you will have to compose with the appropriate flora and fauna to ensure your population the most effective growth. Before seeding, it is wise to take into consideration the three characteristics of a plant (food and wood value, and number of seeds to create a new individual). As they also have a specific terrain type where they grow best on, make sure your choices are coherent if you don't want to see them decay quickly. Environments are not always hospitable to the creatures, and the best example is the frozen lands on top of mountains that will freeze most species and literally turn them into fragile ice cubes, so don't keep them too long in this place.

The first animal species you will encounter in Genewars is the mule, a robust but docile creature once you domesticate it. Further in the game, new species will become available after you discover and research them. However their numbers would be limited to five if there were no hybridation possibilities. Thus, with only five different species (mules, crabs, frogs, birds and dinos), you will be able to create new ones that will inherit their parents abilities. The easiest way to create hybrids is to mate two individuals from two different species (such as the mule and the crab), but you can also clone them, this last option requiring that you had previously researched a hybrid, and upgraded your gene pod installation.

Upgrading installations will require more than engineering work. You will first need to build a pulpar installation to convert trees and plants, dragged by mules, into cellulose. The crabs will then help you to bring the cellulose to the structure you want to upgrade, leaving the rest of the job to the engineer. Specialists and creatures, exactly like structures can be upgraded too, but in a different manner. When the Ethereals are pleased by your actions, they will place a black monolith on the planet's surface. The creature or specialist that will touch the monolith will be upgraded. This will take the form of an improved strength or ability for specialists, and a special power for creatures. An example of this is the kick attack of the mule, or an heavily armored carapace for crabs that reflect stunning beams.

The control of your creatures and specialists is easy and simple. If you want to locate a specific specialist on the planet, just right click the corresponding icon to get the main view centered on that specialist. You can then give him your orders which can be either a place where he should go, or a specific task. Specialists, like creatures, can be grouped together by dragging the mouse and surrounding them with a white rectangle. If you want to select only creatures, although they are among specialists on the screen, just press the ALT key during the process. This option will be very useful during the game! Clicking on the circular overview map, located in the upper left corner of the screen, will immediately bring up the corresponding area on the main view. This way you won't have to scroll the screen to reach your base when it is attacked by your enemies, and believe me, it will be more than once. Fortunately, you will be warned when your installations are threatened by enemy creatures, oree when one of your specialists are in trouble.

Whilst Genewars is a real-time strategy game where players must concentrate their efforts on the given mission and on the defense of their population, it is also a simulation where you control life in the smallest details. You can, of course, decide to attack your enemies from the beginning by sending an army of creatures to destroy other bases, but you can still win just by following the Ethereals' orders. This said, it won't be always easy, and often you will have to hold yourself back from using force. 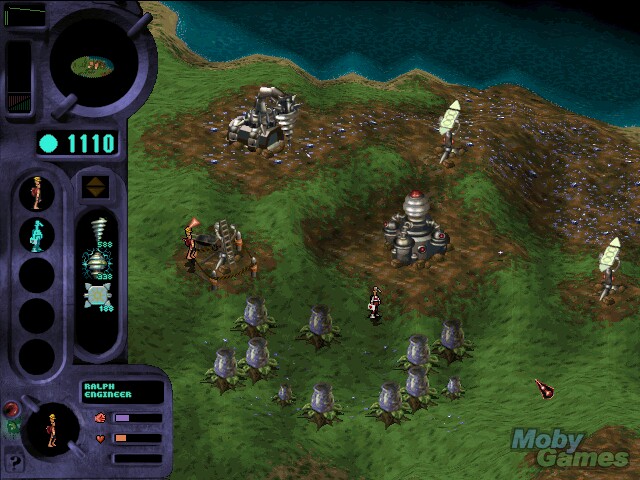 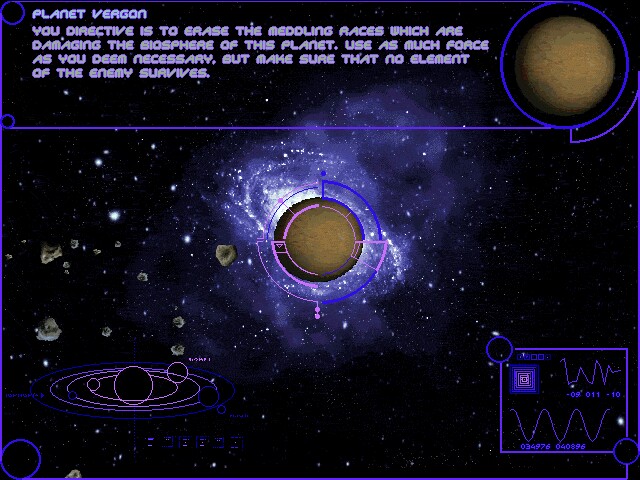