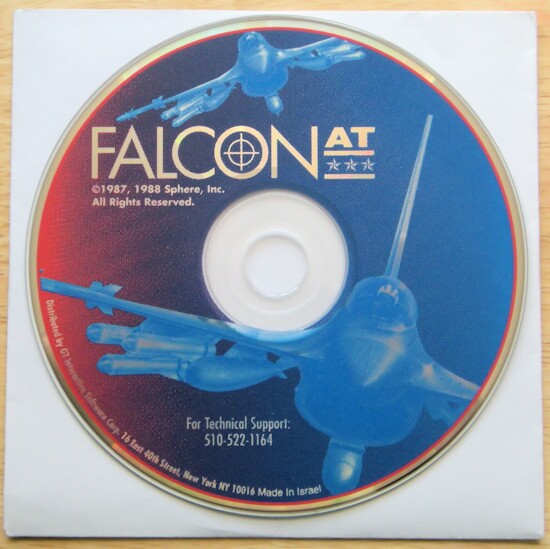 The Game
The graphics of Falcon AT are a dramatic improvement from the original release. Images are drawn by pixel, not line and polygon filled. Explosions are especially nice with an intense rolling effect and convincing display of force. The cockpit interior, HUD, panel controls, and instruments look extremely sharp for the era. On the ground, houses, barracks, bridges, towers, and other structures show surprising detail. I flew close enough to a tank to see that its turret was rotating! This was pretty impressive stuff for 1988. Likewise, the shadows of the F-16 and nearby MiGs are visible when flying close to the ground.

All of the features and controls available in the original Falcon are included in Falcon AT, plus some new ones. There are external views of the F-16 from a friendly chase plane, the control tower, or an enemy MiG. The colors of the ground, sky, and HUD can be changed to simulate weather conditions and nighttime. The radar can show boresight and tracking views. Home base and mission targets are assigned waypoint numbers. Distance-measuring equipment on the HUD displays miles from the selected waypoint, and the autopilot will fly the plane to the waypoint (if there are no MiGs in the area). Afterburners have five levels of power. There are visible and audible ground proximity warnings that alert the pilot to imminent crashes.

Military ranks from First Lieutenant to Colonel denote levels of difficulty the play of the game. Most of the missions are new; four missions are carried over from original Falcon. New ground targets include tanks, parked aircraft, power station, terrorist headquarters, and enemy barracks.

The game includes a dozen missions, you can choose at what rank you fly them, determining the level of difficulty, and you can control the maximum number of MiGs you will encounter. Medals are awarded for good results, and although the missions are not linked it is at least possible to embark on a career, and keep a record of your kills and decorations.

Falcon AT had some of the best dogfighting then available on the PC. When you get the hang of it, sticking behind an enemy aircraft, despite his frantic efforts to shake you off, and then taking him out is very satisfying. Similarly, the ground attack aspect of the game is very well executed, and with practice a most satisfactory mess can be made of the various ground targets. I had the most fun with the first wave of missions -- with tanks, landing vehicles, trains and the MiG 29 fighter, although intercepting the Soviet Ground Attack aircraft in the second mission was also pretty enjoyable.

The most obvious difference in playability between the two Falcons is due to the change in size of the combat arena. Original Falcon's playing field is about 180 miles square while Falcon AT's is 42 miles square. This is not much of a shortcoming because the larger arena was sacrificed for extra detail in ground scenery and targets. I would gladly trade a few square miles of empty space for a richer more detailed sim.

The graphic realism of Falcon AT is where the sim really shines. Spectrum HoloByte profited from its expeience in creating the original Falcon and the benefits are realized in Falcon AT. Dogfighting is much more interesting than in the original because the enemy MiG 21s and MiG 29s perform more in accordance with their specifications. Also, the ground targets are more realistically sized, and there is greater challenge in hitting these smaller objects. Falcon AT is one of the definitive flight-sims of the mid to late 80s. 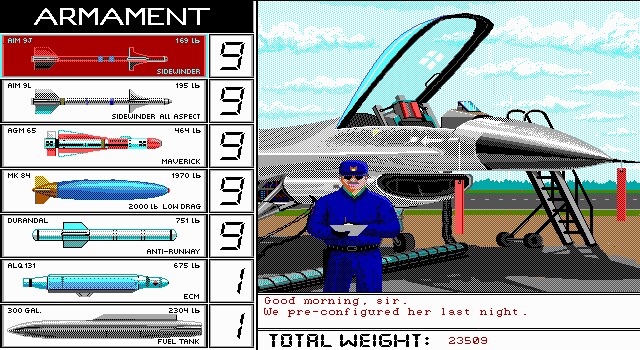 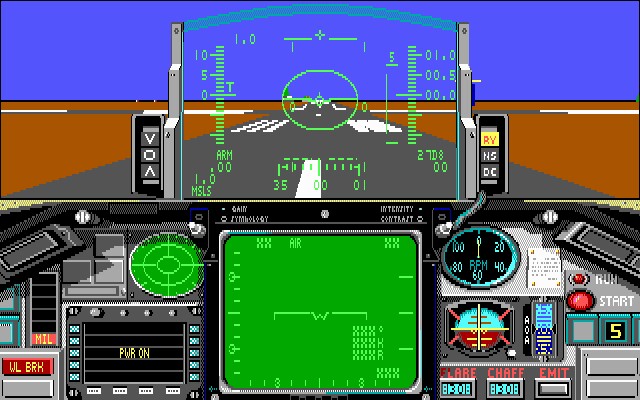