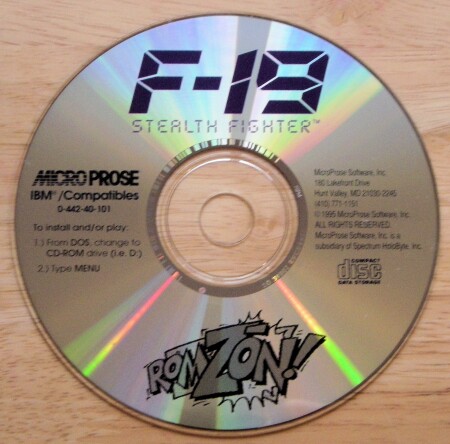 The Game
Microprose established themselves as the premier simulation software company during the days of the C64 with titles like F15, Silent Service and Gunship. In 1988 the company created yet another sim gem with F-19 Stealth Fighter. Not satisfied with simply porting their best-selling C-64 Project Stealth Fighter to the IBM, Sid Meier, Andy Hollis, and Jim Synoski took the increased speed and memory of the 16 bit MS-DOS environment and turned Project Stealth Fighter into a whole new game. The result is F-19. Turing the idea of F-19 into an actual sim was more difficult than you might imagine. After all, how do you realistically simulate high tech warfare with its integrated network of tasks in such a way that the individual can make a real difference in the outcome? Simple, simulate the only weapon system where the lone wolf can still make an impact: The stealth fighter.

One very important note about this game is that the stealth fighter portrayed was not in active service. There were no pictures or documentation available to the public when the sim began development on the PC! Microprose had to incorporate its own extensive knowledge of air simulations and wargaming to fill in the gaps from the lack of available information. The stealth fighter, incidentally, would be known as the F117A when finally acknowledged by its creator Lockheed.

As you would expect with a Microprose title, the packaging is excellent and includes an impressive 192 page glossy manual (weighing in at a full pound) with attractive graphics. The manual includes tutorials on aerodynamics and flight principles, radar, stealth technology, air-to-ground tactics, air-to-air tactics as well as detailed descriptions of aircraft and ordnance. .The game itself has a wealth of tweakable options to create a level of difficulty that suits your taste. Four theatres of war are on offer, namely, the North Cape, Central Europe, the Persian Gulf and Libya, with three levels of conflict; cold war, limited war and conventional war. There is also a training mode available.

One of the most exciting scenes in Tom Clancy's novel "Red Storm Rising" is the scenario where F-19's penetrate behind enemy lines in Western Europe and take out five Russian Mainstay AWAC radar planes, thus preparing the way for one hundred low level attack fighters to attack a variety of targets in Eastern Europe. Its an exciting sequence in the book. And this is precisely the type of mission you could expect from F-19. There are a sizable number of primary and secondary missions available in each of the theaters. You select whether you want an air-to-air mission or a strike mission against ground targets. The computer then assigns you specific targets.

You will reach your objectives using free-fall bombs, retarded bombs, glide bombs, and conduct air-to-air attacks using fire-and-forget missiles such as the "Sidewinder" and AMRAAMs, as well as air-to-ground missiles such as the Harpoon, HARM, and Maverick missiles. You will learn how to avoid missile attacks using not only hardware such as chaff, flares, ECM, IR Jamming, and decoys, but also by maneuvering (you can "turn inside" a missile if you know what you are doing up there).

Probably your most important instrument is the cunningly designed stealth indicator. This is a vertical column which displays your level of concealment. The level fluctuates, moving from the bottom up. You will also see your opponent's level of surveillance which fluctuates from the top down. If the two levels overlap, then your aircraft has been illuminated by enemy radar and you are no longer invisible. You must therefore fly in as stealthy a profile as possible, and it is this discipline that is probably the game's most notable feature. Banking decreases your stealth as does flying fast. Even opening the bay door to deliver a weapon has a drastic effect. The game actually becomes rather like Microprose's earlier Silent Service which, as the title implies, is about silently stalking your opponent, destroying him, and then sneaking away. This game is not for the brazen Top Gun warrior or gung-ho mind-set, it is for the highly disciplined assassin.

F-19 is a game that stressed fun and tension above all. The controls are easy to learn, while the simplicity of their layout prevents confusion in the heat of battle. Considering the sim dates from 1988 the terrain is a bit sparse but nonetheless effective. You will need to concentrate to survive sneaking past enemy radars posts, flying under enemy fighters and radar ships, and taking out your primary targets. The sim is challenging enough that, even many years after its release, it still gives you a sense of accomplishment after finishing the missions. Try a cold war ROE where you must not be seen and you will know what I mean. The ability to be promoted and win medals adds an adventure feel to this combat sim, as with the full debriefing that showcases your kills and mission objectives. All in all F-19 is a sim that feeds your ego and tests your limits. The sheer challenge and depth of the missions cannot go unnoticed, with their various buildings, vessels and aircraft, creating situations that are often atmospheric and taxing. F19 uses the stealth principle within the game to great effect.

In summary, the vast array of missions, range of authentic weapons with different release parameters and effects, plenty of enemies from planes to radars to ships and more, different rules of engagement, multiple theaters of war, the tension of sneaking around radars, add to the effectiveness of a sim with a solid underlying engine. The tension in the missions is real. If you got hit you can be damaged, and if you managed to get the wounded bird back to base you really feel you've cheated death. F-19 is an excellent example of Microprose flight sims of the late 80s. It is easy to see why Microprose was a leader, not a follower. 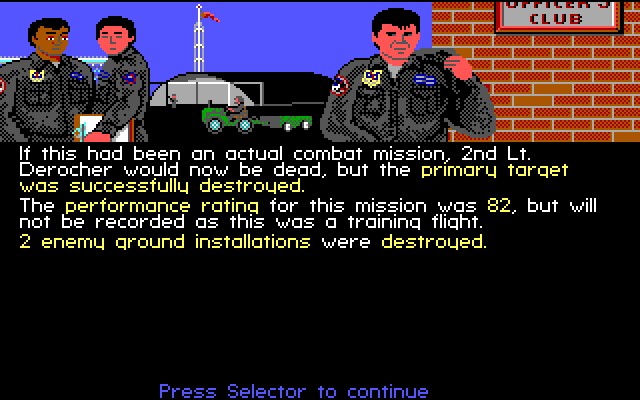