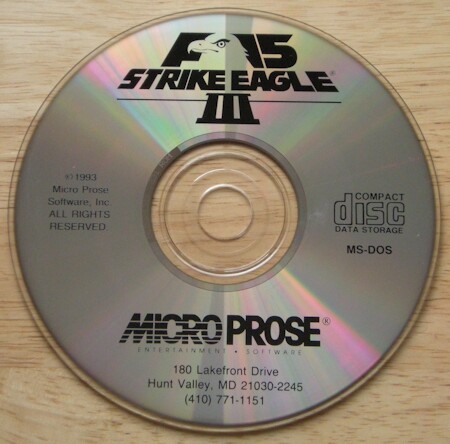 The Game
In F15III you play pilot and Weapons System Officer (WSO, ie backseater) of the F15E strike variant of the US super-fighter. You fly single missions or "campaigns" in the "Desert Storm" conflict, or fictional scenarios in Korea and Panama.

Each mission is the familiar MPS solo flight vs heavy opposition with primary and secondary targets assigned. From a series of fine animations you can choose from four levels of difficulty and ten realism options (I set all to "authentic"), proceed to a "briefing", then weapons selection, and finally to the flightline.

In the briefing, a chalkboard lists the targets, plus info on time of day, enemies expected (invariably everything they've got), and a few other bits of info not worth reading. You are also given VCR shots of the targets (sometimes illegible), and location on a map. With its large scale, all I can tell are the basic courses and approximate target distances. The more useful in-flight map is similar to the one in F117A. Intelligence is virtually nil, which I guess is okay as you can't adjust waypoints anyway.

You do get a fine choice of ordnance, better than F3, and with the "authentic" weapons setting be sure to choose ones that can destroy the target. I suggest "practicing" on your own airfield

Missions start either on the runway "cleared for takeoff", or just after in-flight refueling from a KC-10. Missions end with landing, or rendezvous with the tanker. Too bad refueling plays no other part.

Ground attack is this jet's forte, and where this game excels. It's all there, including Forward Looking IR and LANTIRN for night navigation and targeting (day or night). You'll see those famous Desert Storm type views terrifically depicted on the FLIR MPD. You have 7 MPDs (multi- purpose displays), 2 ground radar modes, many delivery options (CDIP, auto, laser, guided, and combinations thereof) and HUD modes to "aid" you. With aids like these, I know why this is a two-man plane! Alas, you've got to do it all as your backseater is confined to the occasional digitized warning (modem mode excepted). The greatest challenge is identifying and designating the target before overflying it. You have various ways to do this, and with practice you get the hang of it all. The ability to use the mouse to designate targets from the HUD, FLIR, or radar maps is appreciated.

In flight, the feel is there. You manage all the complex systems, struggle to achieve early target acquisition, stay low to avoid radar. Pay attention to the TWI (very much like F3's). When you are eventually detected (perhaps due to the carnage you left behind!) expect SAMs, AAA, and ground control directed enemy flights to greet you. It's no walk in the park, well done! Night flights are especially hairy as the sky is black, and FLIR usage is a must.

Air to air is less well implemented. Again the many radar modes (LRS, SRS, TWS, STT, Auto, Bombsight) are terrifically sophisticated. Radar coverage is a forward looking cone, nose stabilized, like it should be. Also, the mouse can be used a number of helpful ways on the radar MPD, like designating targets or selecting azimuth angle. But I never miss with my missiles if fired in constraints (lock, min/max range, aspect). Gun hits have a rather generous target radius and one burst kills, though targets must be reasonably close (0.4 miles on highest difficulty). Your ability to evade missiles, and countermeasure effectiveness, is far less assured than in F15II, but not nearly as believable as in F3. Enemies will throw in some moves when in a knife fight, but fly alone and are pretty dumb. They do a very good job sneaking up on you and firing with little warning.

The HUD probably displays "indicated" rather than "true" airspeed. In that case the climb performance and maximum speed of about 400 knots and mach 1.2 (in afterburner for a clean jet), aren't as poor as they first appear. But the Mach number, HUD and (my calculated) ground speed don't jibe, so I'm not sure what is modelled. And mach 1.2 is still well below the F15's reported mach 2+ capability. At low altitude, the modelling seems better. Weight penalty is modelled better than in F3. But fuel consumption is a bit high, and incorrectly isn't better at altitude. Another reason to stick to low level flight. Neither flaps nor rudder control are supported. Rudder would have been especially helpful in lining up ground strikes.

Summarizing the simulation, it is believable, and very intense, as long as one sticks to low level ground attack. If air engagements are treated as something to avoid, and with BVR techniques when inevitably forced to, it remains convincing. The variety of targets dictates different weapons, and thus delivery and approach methods. Throw in the variability of enemy engagement, and the result is surprisingly unrepetitive gameplay.

There's more to F15III than just realistic systems. It was much hyped for the then new graphics engine. I find this to be a matter of personal taste, but a few comments are offered. Impressionism fans, have we got a sim for you! Cities are a mottled collection of gray pixels, with structures (often the same color) rising from within. As one said, it looks most impressive 10 feet from the monitor, yet I've grown to like it. Most impressive to me, is the enormity of the MPS worlds and the amount of detail within. The Korea theater includes all of Japan, and a chunk of China and Siberia. Within this area you will find uncountable cities, airfields, and military sites (as well as a familiar green friend towering above Tokyo). In the Persian Gulf, you'll fly over oil wells and even a huge oil spill. Turn on "training mode" and slew (teleport) your planes location to tour these bountiful worlds!

View selection, including tactical, reverse tactical, missile, padlock, some with scanning, are fairly comprehensive. Explosions are fantastic. Your bird is beautifully rendered. All other planes are mediocre, very similar to those in F117A.

Sound support is also fine. The engine sounds great and the few WSO, and "Bitchin Betty", comments are helpful. But without her "pull-up" warning as in F3, I often become a lawn dart. Also, WSO commands warning of enemy planes would be welcome. AWACS give such info, but only when asked. More than once I've punched in a request to hear "snap, 262, 0 (miles)". Thanks for the warning, bud! There is also supposed to be a JSTARS flight which may reassign targets, but I have yet to see it implemented.

Overall, this sim is far too good to share the same appellation as F15II. It offers better avionics simulation, ground combat, and more accessible gameplay than Falcon 3. 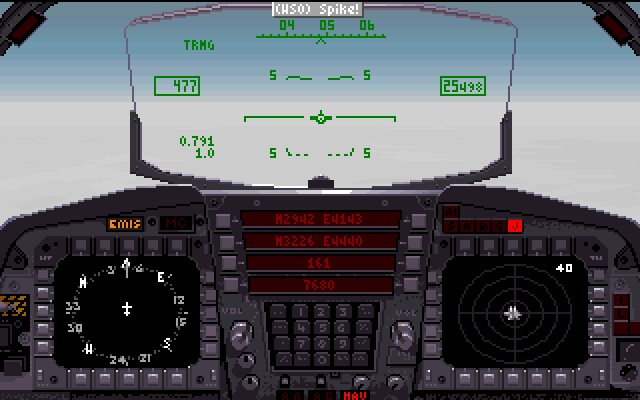 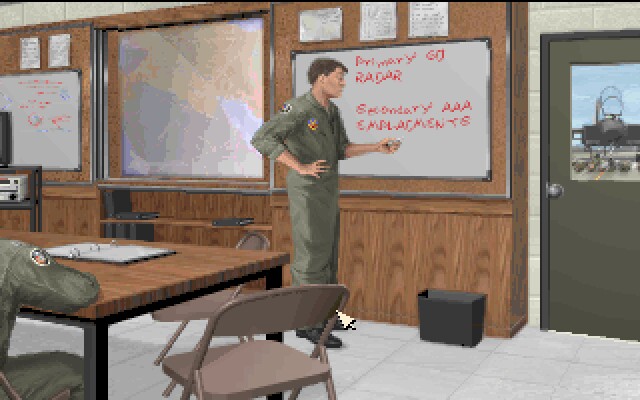