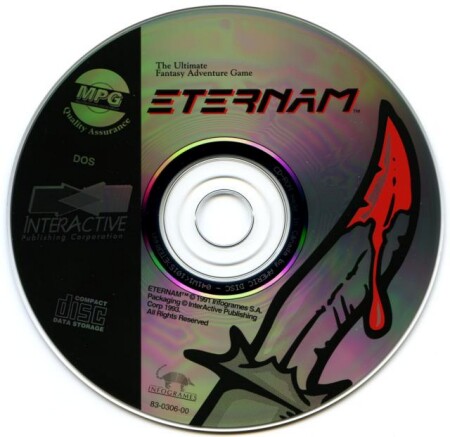 The Game
Gamers might view Eternam as a sequel to the earlier Infogrames release Drakkhen. In spirit at least they would be correct. Certainly the interface, visual style and gameplay are extremely similar to the earlier game. It is not however a direct sequel, but a game heavily influenced by Drakkhen. The designers improved the overall gaming experience, from graphics, to plot, to interface by dissecting Drakkhen, and it shows. You will find several references to the prequel in Eternam, including a Drakkhen satire midway in the game. If you played Drakkhen you will catch many subtle and obvious references.

Eternam is a first-rate adventure about a planet-sized amusement park of the same name. The hero is a futuristic vacationer named Don Jonz, whom one might suspect is able to trace his lineage back to Indiana. Equipped only for a fantasy week away from work, Don quickly discovers that Eternam is up to its equator in trouble. At one time, the planet belonged to a race of lizard-like creatures called Dragoons. Scalped out of the rights to this paradise world, they huddle together on one small continent where they have managed to silently take control of the planet's massive computer system, under the direction of their leader, Mikhal Nuke. Don must navigate this fantasy-turned-nightmare world in order to reach the Dragoons, bring Nuke to his knees, and settle the dispute. Helping the hero is Tracy a cute digitized secretary who will be Don's online assistant.

Eternam features several continents, each of which is as unique as it is threatening. A medieval land is guarded by a duke whose servants' passions range from desserts to stone statues. Another land mass is occupied by French revolutionaries who are split into a confusing variety of factions and loyalties. A bizarre collection of mismatched machinery dominates a high-tech civilization while a deadly pyramid overshadows an ancient Egyptian landscape. While initially appearing to be a series of continent-sized, self-contained mini-adventures, Eternam will eventually require Don Jonz to do some fast-paced continent-hopping in order to achieve his ultimate goal.

The adventures of Don turn out to be an interesting yarn, and are laced with hefty doses of humor. Cameo appearances by anachronistic personalities abound, including not-quite-the-crew of the original starship Enterprise. Never letting the player forget that this is indeed a fantasy theme park, technicians occasionally wander through the picture, and a passing tourist may supply help at an otherwise hopeless moment. In the tradition of several other popular adventures, two of the programmers have also been given pivotal roles in the adventure. Experienced adventurers may find themselves reaching for the mouse to control Eternam, although any such effort will prove wasted. Nearly the entire game may be controlled from the keyboard using the four directional cursor keys. Six icons line the bottom of the screen representing commands, all of which have keyboard shortcuts.

Inside buildings, Don is seen as a two or three dimensional view around which he may be guided by the four direction keys. Each time Don passes something of interest, a line of sight appears on the screen along with text identifying the item. Don would be wise to pick up any item which he is permitted to take. Most items have a use elsewhere in the game, and there is no limit to the number of items he is permitted to include in his inventory.

Conversation with other on-screen characters may be initiated by Don or with another character. This conversation is of the multiple-response format, in which the program offers the player two or more choices of dialogue. You will be challenged by Eternam as vital pieces of information are well-hidden throughout the game. At more than one point, Don will take a trivia quiz which might seem like a copy-protection test. Rest assured, the answers will be found elsewhere in the program and not in its documentation. This is an RPG that requires you to suspend reality, dive right in, and remain attentive!

Outside buildings, the player views the action as seen through Don's eyes. Considering Eternam was released in 1992, there is exceptionally smooth-flowing three-dimensional scenery that creates the impression that Don is riding a bicycle or a well-trained futuristic horse. It is fantastically done, and was a "wow" moment in the adventure. Certain inhospitable reptiles, possibly related to the Dragoons, also travel Eternam's roads in an attempt to mortally end Don's visit. For this, he is equipped with some type a self-aiming weapon which is more than adequate for self defense. Don begins his adventure with 100 hit points which may be reduced by encounters with these creatures, or by some of his more dangerous adventures indoors. The points regenerate on their own as long as the player prevents them from reaching zero.

Eternam is presented in an entertaining variety of graphic styles. Beautifully painted graphics dominate the program, but these are frequently combined with some hilarious cartoon-like sequences. As I mentioned, there are also digitized photographic images to represent Tracy and Mikhal Nuke as they communicate with Don from within Eternam's computer. Nearly every scene includes some eye-pleasing action or animation.

Eternam is a relatively challenging and very rewarding exercise to complete and will provide the player with more than a few tense moments. Its greatest achievement is clearly its remarkable and compelling story which will keep players exploring until they reach the game's satisfying conclusion. A worthy successor in a much expanded style of Drakkhen. 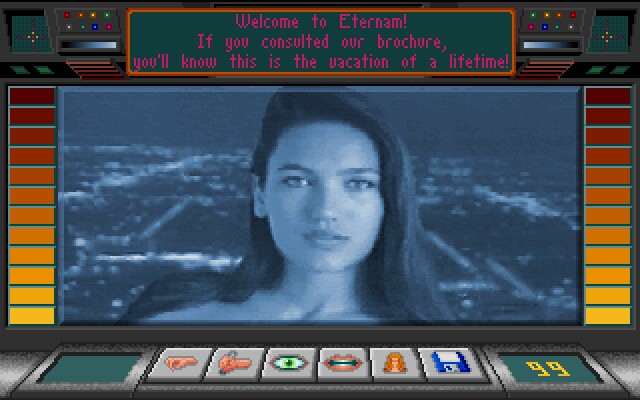 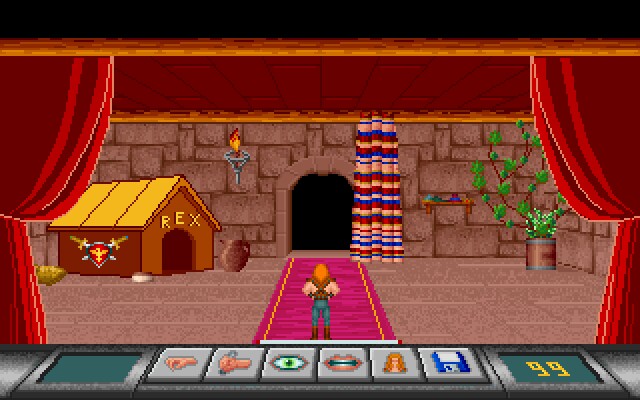