Actual Game
The Game
Dragon Lore II: The Heart of the Dragon Man marked the second attempt by Cryo to expand on the legend of the Dragon Knights on which Dragon Lore: The Legend Begins is based.

Dragon Lore II: The Heart of the Dragon Man takes place in a medieval land called Draconia. It is a land where men worship dragons and both work together in harmony. This sequel picks up where the original Dragon Lore: The Legend Begins ends. The Hordes from the Land of Nightmares are about to attack Draconia. It is because of this threat that the Dragon Price has dubbed you, young von Wallenrod, to become a Dragon Knight. The Fire Dragon, Maraach, has been missing for almost 20 years, disappearing shortly before his last human rider, your father, is killed. Despite the fact you have been voted to the ranks of the Dragon Knights, your enemy is now contesting your right to the title. You now must go through further testing in order to be accepted by the elite of the land. You must set off on a series of journeys and prove yourself at the joust. In order to do this successfully you must also find yourself one of the elder dragons to sponsor you. The trouble, however, is that there is only one elder dragon that has not been claimed and no one has heard of this dragon for a long time.

The graphics in Dragon Lore II: The Heart of the Dragon Man come in 2 favors — the cut scenes and background arts being the first, and the character-object interaction being the second. The cut scenes and background arts in this game are excellent and even awe aspiring. In the original Dragon Lore: The Legend Begins, the characters are 2D renderings with little to no animated movements. You interact within the game by selecting a branching dialog tree. In the sequel, the characters are rendered in 3D in SVGA resolution with animation and look much more impressive. Over 50 game sets and 60 characters are modeled in 3D, amongst which include 39 characters that are interactive with full voice support by professional actors. I think it is a good choice on the developer's part to use rendered animation for the characters rather than hiring real actors that will otherwise detract from the fantasy feel of the game, since any costume and creature crafted for the game will never live up to what the imagination can create. The music and voice acting are professional and dramatic, though the sound effects are sparse.

Control of the game is icon driven and very basic. You point and click in the direction you want to go on screen. The arrow will appear only for those areas to where you can move. This is not a 3D game in the sense that you have free movement. You click to see an animated movement, then click again to move onto another location. It is sometimes easy to lose your physical direction in the game since movement is not square based. You can be moving north, click to trigger an animation, and find out that you are now left in a clearing but facing east because you have turned right during the animation. If you are not paying close attention, you may miss it and become disoriented. The underground mazes in the game are impossible to map on your own accurately, so that you must depend on the maps you find inside the maze to make your way through.

The puzzles in Dragon Lore II: The Heart of the Dragon Man are typically of 2 sorts—dialog and object based. Talking to different people activates different events, though the interactions are still based around dialog trees. It is possible to say the wrong thing to a person and they will no longer help you with your quest. It is also possible to miss puzzles or objects along the way and have to restart the game. There are also some minor role-playing elements in the game. The central quest revolves around three goals—locating the stone tablets that document the alliance between men and dragon, recovering the Fire Ring that makes the wearer immune to the fire from Maraach, and finding the dragon's whereabouts. The final confrontation takes place in the scared joust of the Valley of Dreams.

You will fight many creatures throughout the game. There is a health bar and a strength bar to monitor your status. Different creatures have different weak areas where greater damage can be done if you strike at these areas. For a graphic adventure game, I prefer that the developer leaves out the combat sequences and substitutes them with puzzles such as finding an object or weapon that will overcome the creature and then using it to dispose the creature quickly. The current system attempts to blend three different genres all in one game—action, adventure, and role-playing. The ability to cast spells during combat is refreshing. Day and night actually passes in the game, particularly when you are in the city. Your time in the city also passes over a period of days, so that some puzzles can only be solved earlier or later in the week or at different times of the day or night. The developer claims to provide over 80 hours of gameplay, including 20 combat and 10 jousting sequences.

The strongest element of Dragon Lore II: The Heart of the Dragon Man is the excellent artwork. It vividly captures a time, place, and mood unique to this fantasy universe. The simplicity of the dialog system is a mixed blessing. While it is supposed to make for easier gameplay, it often limits your interaction with the game characters. The puzzles in the game vary widely in difficulty—some are too easy, some are just right, and some and too aggravating. A few puzzles in the game have multiple solutions; for example, there is more than one way to escape the forest. The player can also work on several different puzzles at the same time.

Dragon Lore II: The Heart of the Dragon Man is a title that combined action, adventure, and role-playing all at once, rather than limiting itself to a single genre. For those of you who love vintage eye candy you will probably play through it to its pretty ending. 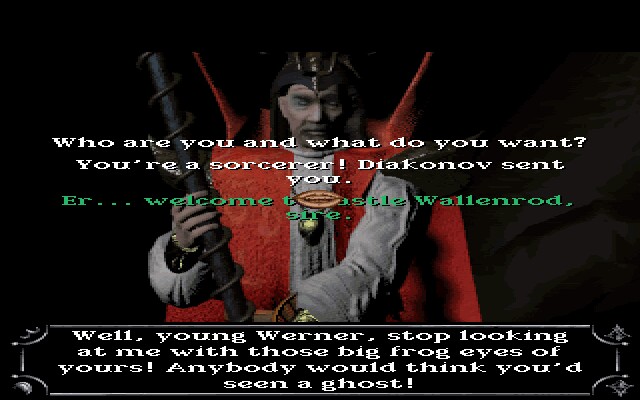