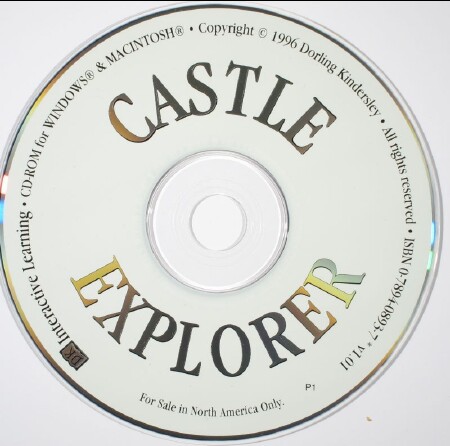 The Game
Castle Explorer is an educational title aimed at children aged around eight or nine and over, and shows what a functioning 14th century castle looked like.

The premise of the game has a king being suspicious of baron Mortimer who owns the eponymous castle, and wants information. The player is placed in the role of a spy, who can disguise himself as a knight or a maid, and can explore the castle by observing cutaway drawings, or by entering one of four interactive rooms in the castle: the kitchen, the armoury, the alchemist's lab, and the solar. In these rooms, the player will meet the characters of the game, played by live actors: the cook, the armourer, the alchemist, and baron Mortimer himself, respectively. Each room has one piece of the map that is torn to five pieces that the player must discover, but must do so while doing simple tasks in these rooms (putting bread into an oven, cleaning armour, throwing wood in fireplaces, etc.), otherwise his cover will be blown and will be thrown to the dungeon. On some instances, the character assigned to the room may ask a question before letting the spy in, and if the answer is incorrect, guards will take the spy to the dungeon as well. But, the jailer happens to be on the spy's side, and will readily free him for a bribe of 3 coins. These coins, as well as objects that the "maid" may be called to gather, are scattered in the aforementioned cutaway drawings and can be placed in the spy chest (inventory). The way the characters treat the spy differ depending on the disguise, which can be changed at will in the spy hut just outside the castle. Initially, the player can go without a disguise, acting as a page, and can roam the castle freely but will not encounter the hidden pieces of the map nor have access to the spy chest before disguising.

The fifth piece of the puzzle map is gained by answering four questions that the king is interested in and are found in the scroll in the spy chest. Answers can be found in one of three ways: by observing certain objects in a room and having a character explain them, by clicking on objects in the cutaway images for expanded descriptions, or by reading the books that elaborate aspects of medieval life like warfare, food, society, etc.

If successful, the player is presented with a certificate from the king at the end of the game, which can be personalized to the player's name and printed or saved as a file.

The exploration is based on Dorling Kindersley's books with detailed cutaway drawings, more specifically Stephen Biesty's Cross-Sections: Castle from 1994. Certain locations have interactive video sequences with live actors against computer generated backgrounds. Some of these contain simple tasks to be performed such as cleaning armour or putting bread into an oven while in others the player is asked questions to ensure that they are not a spy.

The game is backed up by a detailed reference section where any unfamiliar medieval word can be looked up, and also a 'Trails' button which serves as browsing history of terms. 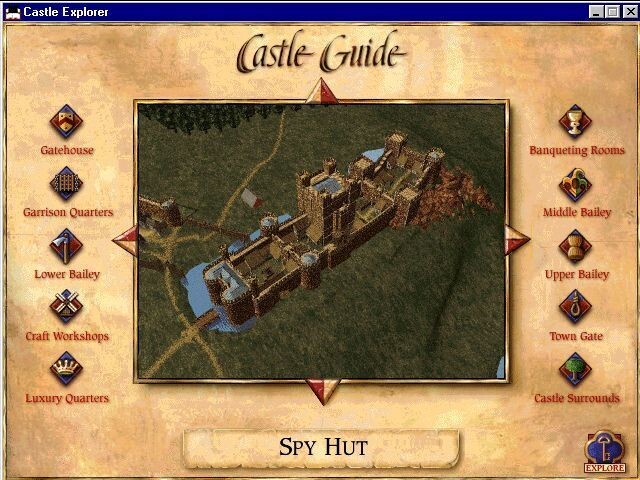 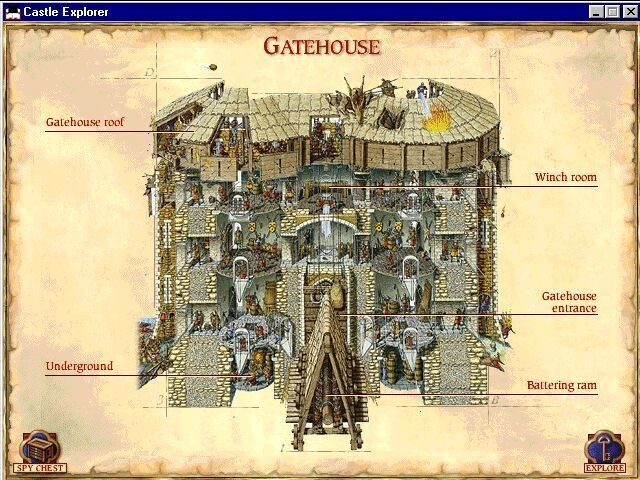 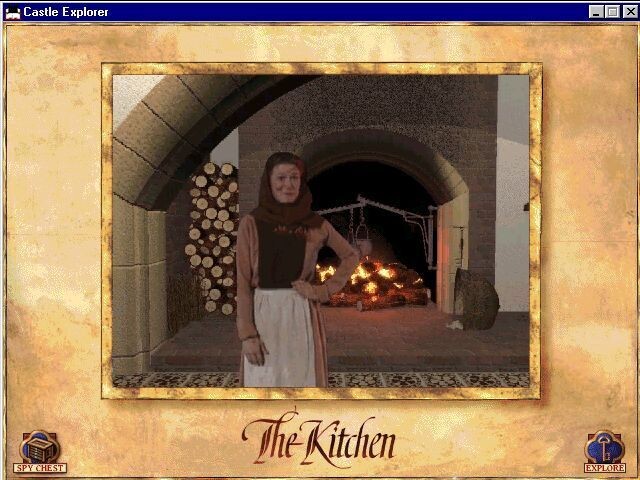