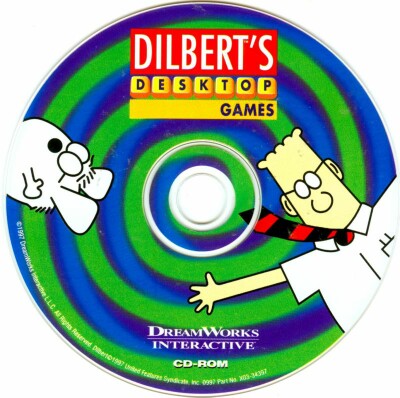 The Game
This game, part of the Desktop Toys series, features characters from Scott Adams' popular Dilbert comic strip engaged in a variety of time wasters. In typical Dilbert style, the game features undertones of office incompetence and company ineffectiveness, including voice acting of sarcastic quips and sayings in a variety of character voices. Many of the games are played on "screenshots" of the current desktop, allowing carnage to spread from the game onto the work documents the player might have had open.

The ultimate objective in Dilbert's Desktop Gamesis to play each game, uncovering a a hidden "part" to the Desktop Toys machine. Successfully obtaining all of these parts (usually by shooting it) will unlock a "secret" Dilbert video on the cd-rom. All in all, there are 6 mini-games that feature the machine parts, often clones of arcade-style action, that can be played: Techno Raiders: Dilbert must navigate the halls of his office in this platform game and avoid obstacles and traps set by "Techno Bill" who is attempting to usurp office technical superiority. As he ascends the office building, the challenges get tougher and tougher.

Enduring Fools: Suddenly a bunch of idiots start opening doors to the player's desktop and disturbing productivity! There's only one solution then... to zap them all as quickly as possible with the phaser provided. Players move the mouse around, aiming and firing at co-workers before they exit

Elbonian Airlines: The cheapest way to fly is by slingshot! Players send management on a variety of "business trips" towards various targets that appear on the screen.

Boss Evaders: In a Space Invaders clone: The bosses are firing pinkslips from the top of the screen down at Dilbert. To justify his job, he must evade the firings and fire yellow status back towards the bosses. Inboxes will act as shields and absorb pink slips but only for so long. Extra Lives can be gained if the player is able to hit the "Bungie Boss" that briefly appears on the screen.

Can-O-Matic: Deadlines are coming up and the company needs to get as many products out as possible. There's obviously only one way to get this done... by loading expendable employees into Catbert's cannon and firing them at product ideas outside the company. Players try to hit as many profitable ideas while avoiding defective ones which will electrocute the employees. In addition to these games which provide parts for the Desktop Games machine, Dilbert's Desktop Games also provides some additional games and time wasters:

CEO Simulator: For players who think they could run the company better... CEO Simulator is a simple managerial game, played over several days. As the owner of a small company, the player must keep productivity high and the employees motivated. Players can try to manage it to death, provide gifts or just leave the employees alone.

The Jargonizer: Not technically a game, players can paste or type any innocent looking text into the window and then use the Jargonizer to add corporate jargon, buzz-words and managerial nonsense to the use of the English language. If nothing else, one should be able to fancy up a mission statement!

The Final Word: Also not a game, this allows players to affix humorous "stamps" onto the screenshots, preferably of work documents. 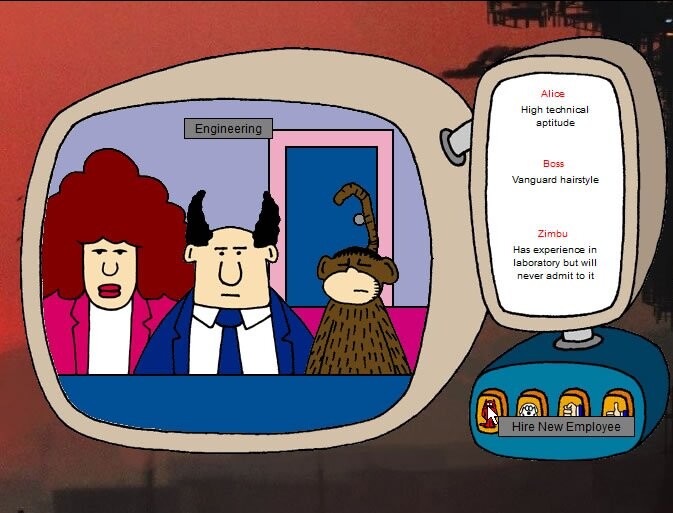 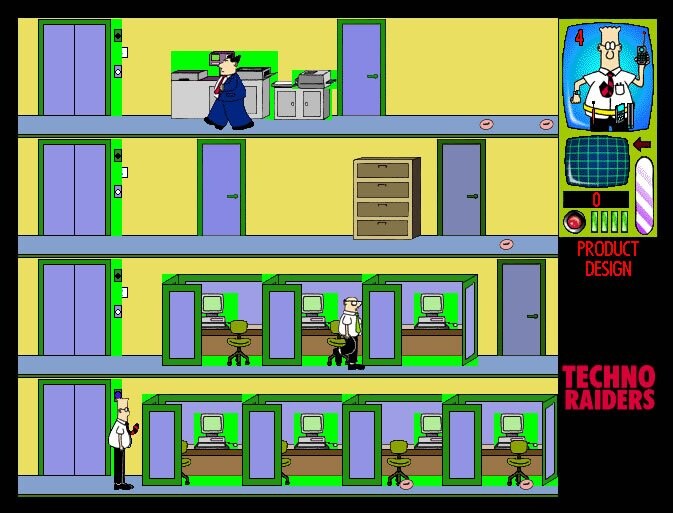