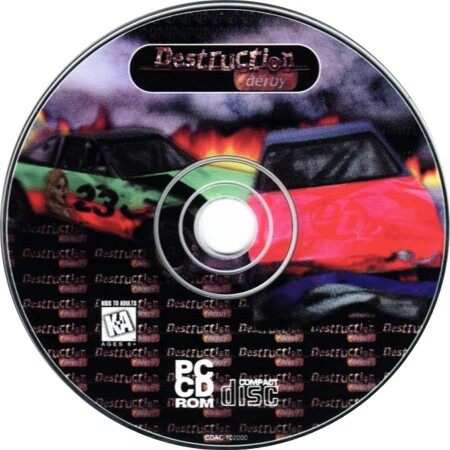 
As you may have guessed from the title, Destruction Derby isn't a game about fair-play. The game features two modes: hard and soft. There are some options to play between the two and change some of the rules to make it even better. Usually, in other car simulators when you drive and slightly touch the guy in front of you just to clear the way, your own vehicle gets damaged and you're not really in the race anymore. It would surely be more fun if you could bump into the cars to wreck them. Well lucky you, this is exactly what Destruction Derby is all about.

You drive a car in a sort of round arena called "the bowl" with 15 other cars and the goal is to keep the car moving for as long as you can while hitting the others cars. Of course when you hit them or drive into the wall you suffer some damage but the car can handle quite a bit of hits that after some time, will begin to show on the car. The secret is to avoid direct head-on collisions and instead use the sides of the car to strike the other cars. It's a lot of fun when all of the other 15 cars aim at you as their target!

If you would rather work on your driving skills you can try "Wreckin' Racing" where the purpose is to gain points. You will receive ten points if you make another driver do a 360 degree spin or wreck his car, four points for a 180 degree spin and two for a 90 degree spin. There are sixteen pilots waiting to trash each other for points on the track.

The game includes five tracks. Navigating them isn't nearly as easy as it looks. The tracks are narrow, slippery and bordered with walls. If you are more a race fan the game sports "Stock Car Racing" mode. The purpose here is to be the fastest knowing that every forbidden maneuver on the road is permitted during these races.

If you're out for blood you can try the duel mode, a one on one clash. The first thing that you will notice playing this game is the speed of the game and how quick the car responds to the handling. There are three cars to choose from, and they are quite easy to steer even in Pro. There is no manual shifting, only throttle and the brake which is also the reverse. The game is very fluid and you can get the hang of it quite quickly. Some of the opponents are more difficult to handle, but each time you make some points somebody shouts at you so you can identify them.

Your car is shown externally on the screen though you can zoom in or out. If your are going backwards, the camera will change position. However, there is no view from the inside, no speedometer or gear shifting, and no rearview mirror, which is a pity. You will also find in the right corner of your screen a small representation of the car with color flags that indicate the degree of the damage sustained.

There are four leagues in which the color of the top of the car indicates the one you are in. You are compelled to win your league before you can advance to the next one. The choice of cars available is quite narrow and no mechanical options are given about them. One of the best gimmicks in this game is this destruction derby race in the bowl. The number of other tracks are limited to five that are quite small with the decor of each one being different. The nice thing is that you can run some very different races on the same tracks, depending on the kind of game you are playing.

Destruction Derby includes a good replay editor. You can choose almost any kind of angle for your camera from a helicopter view to a zoom. You can easily cut out the bits without the crashes and watch your best moves over and over again. 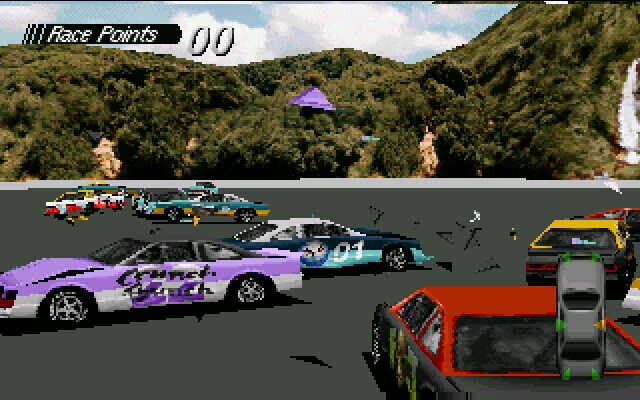 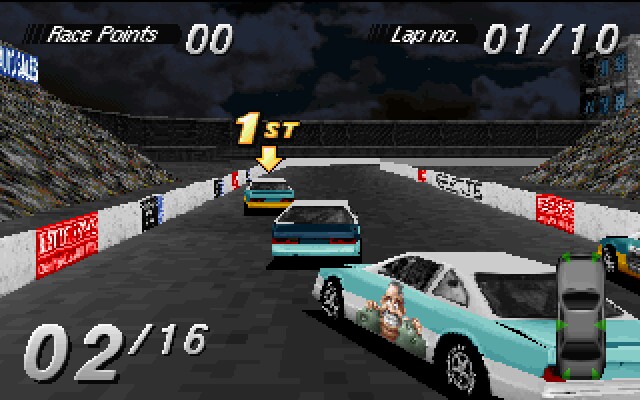