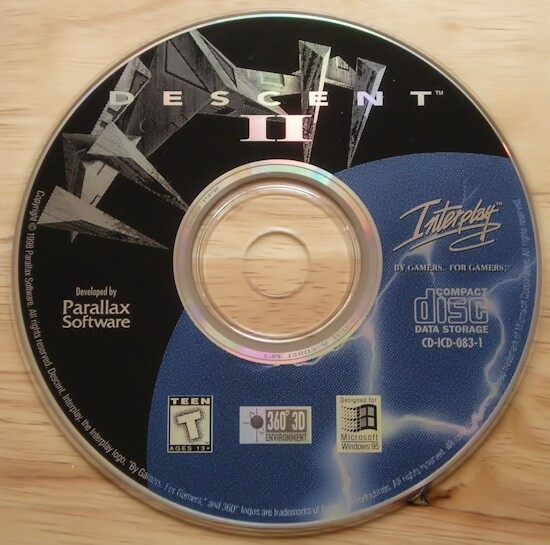 Actual Game
The Game
Yes, Descent 2 is another first person blast n' explore game from the mid 90s but it sure does move. It's much faster and a lot slicker than the first game and it features a whole bunch of new stuff, not the least of which is your new best friend, your Guidebot. Descent 2 kicks.

The graphics for the sequel haven't been greatly improved from the first game but they were still some of the sharpest available at the time. The emphasis in Descent 2 has been placed on speeding up the animation and adding more realistic lighting effects. The visuals are completely satisfying and immersive. Oh, and don't worry, the topsy-turvy "I'm upside down and I can't get up!" feeling of "whoops, I'm gonna puke" is still a big part of the presentation. Only this time it's faster.

Descent 2 had absolutely the most impressive use of tunes of any game of the era, even when compared to Psygnosis' Wipeout, Shiny's Earthworm Jim and Interplay's own Loaded. Interplay was able to get Ogre (from the industrial band Skinny Puppy) and Type O Negative to create some of the original stuff that accompanies the chaos in the adventure. Rhythms and sound effects spill and collide into each other and create an aural equivalent to the sensation of twisting and winding through the corridors of the mine shafts that you must destroy. There's no formulaic dirge in any of the pieces that I heard and even though most of the music is all fast-paced aggression, there's enough variety in the instrumentation, so you'll never get bored of it. This is one game that definitely benefits from the coming together of all of the pieces that make up its entirety.

Sound effects are solid but they are virtually identical to the first game. If you haven't played Descent before, I'll give you a hint: zap, boom, sizzle, "T minus 10 seconds..." and "Yahoooo!" - this last sound effect is yours after you've been able to blow up your first off-world mine shaft and squeeze through its fiery escape shoot.

The mines are incredibly dense and somewhat incomprehensible in D2. The Automap, although very cool to look at, doesn't really make the mazes any easier to grapple with. I gotta say though, for the first few levels, it is really cool just roaming through the tunnels, chasing down your Guidebot and exploring the incredible mobility at your disposal. Once you've gotten a handle on the freedom that you have in Descent II, the sensation of speeding through the corridors is just breathtaking. And if you want a bigger kick, you can boost up your afterburner and kick it through the mines at twice normal speed (not for first-timers)!

You'll become so used to the gravity free lifestyle you can enjoy in this title, you're going to hate crashing back down to reality. 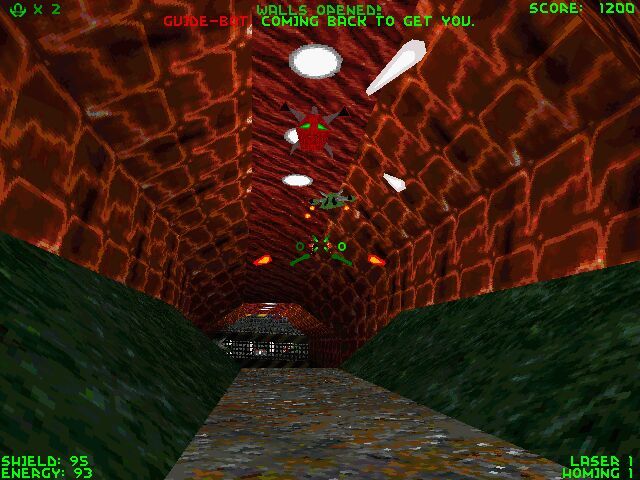 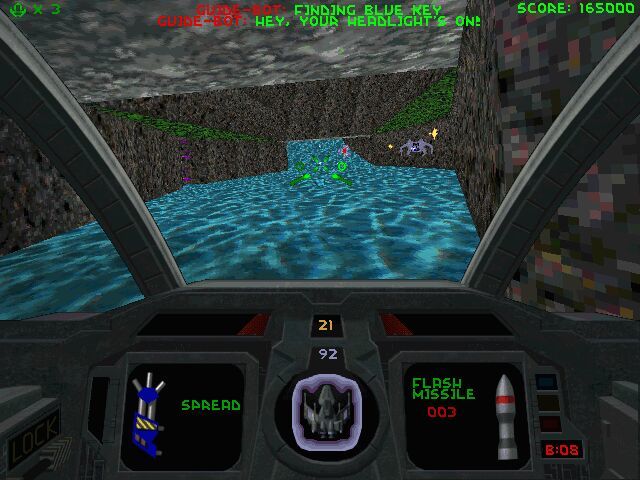