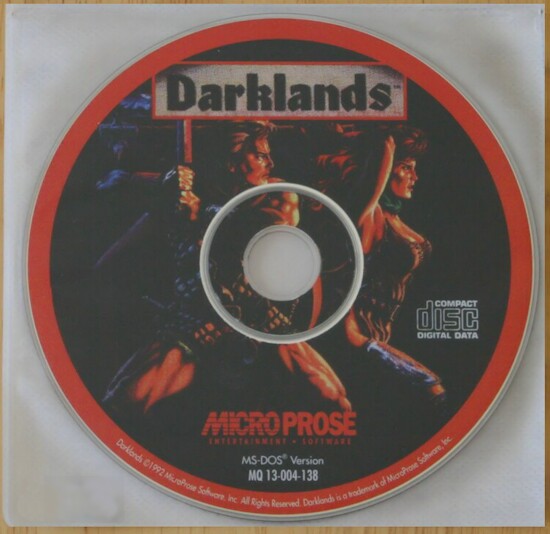 Actual Game
The Game
Deep in the twilight of the Black Forest, you and your companions crouch before the robber-knightis tower. Hans, the alchemist, places his mysterious potion by the door. Ebhard the friar implores Saint Dunstan to bless your weapons and armor. And you and Gretchen grip naked longswords, praying your plate mail won't squeak. With a thundering crash, the door explodes into fragments! You charqe inside, swords and maces swinging. One guard falls beneath the power of your blade... then two more! You storm upstairs to the second floor, but there to greet you is Gerhard the Red Wolf, the infamous robber-knight, surrounded by his henchmen. Hans tosses a choking potion into their faces and you quickly charge into the fray. The room echoes with the clash of steel on steel...it's a battle to the death in the Black Forest!

-- A day in the Darklands

Darklands is a unique RPG because it is grounded in a historical situation - that of 15th century Germany, with the single exception that the superstitions of the time are taken as true. There really are witches, saints really do grant favors to the pious, and so forth. This means far more than simply specifying a set of place names. Microprose has applied this superstition to all areas of the game. The arms and armor are those of 15th century Germany. Religion and clerical activity work as they did in 15th century Germany. Rather than use wizardry, we have alchemy, of the 15th century flavor. Your quests are all keyed to the milieu as well. This made Darklands a game like no other before or since. Rather than inventing yet another fantasy world, populated by yet another set of Tolkienesque personalities, with yet another invented history, with yet another set of random artifacts, we have everything plausibly grounded in a historical setting.

MicroProse fleshed out a solid concept with the challenging simulation of Darklands. The common thread of most almost all MicroProse titles is that they have an intellectual core. This rings true with Darklands -- The scenarios faced by the gamer are straight from the events and attitudes of Medieval Germany. 15th Century Germany was a time of violence and corruption and was an era with three Popes simultaneously in charge, powerless emperors, gangster nobles and venal clergymen. Darklands recreates this period holistically and emphasizes the beliefs of the time: witches worshipping the devil, people praying to saints to produce real miracles, alchemists turning lead into gold and dragons inhabiting caves.

Character Generation
The character generating system is one of the game's best features. It is truly a masterpiece of options for the player. You can chose your name and gender and then you go on to select your hereditary from common peasant to noble birth, which effects your stats and skills accordingly. And skills there are! The skills all play a role in the game. One of the more unique skills is divine favor which effects how good your chances are of getting your prayers answered. You go on to pick an occupation which adds 5 years to your age and increases your skills depending on the occupation chosen. You can keep going on to higher careers but your character will start to suffer from age. Name another RPG with that bit of realism!

Magic
Darklands includes two distinctly separate "Magic" systems; one based on alchemy, and one based on religion. Alchemy is performed by mixing ingredients to create potions which can slow down or blind opponents, or strengthen your swords, or give you protection against fire. Formulas can be had by purchasing or trading with other alchemists in the city, the proper ingredients must be purchased, as well. The religious system is based saint worship, or hagiolatry. As your characters explore the world, you can learn of saints from monks, in the towns and in monasteries around the countryside. Characters can then "pray" to saints that they know about, and hope for a miracle. There is a pool of "divine favor" points that they can draw upon, adding more to increase their chance of success. If they do not have enough points, they have no hope of success.

Goals
The goal of your adventures in DARKLANDS is to become famous. Along the way, some of the quests that you might undertake are: killing a raubritter or robber baron, kill a dragon, stop the problems with "knockers" in the mines, and drive out witches. You might be asked to retrieve relics, or retrieve stolen papers. Eventually, you will probably take on the Templar knights, and their demon lord, Baphomet. Each time you complete one of these tasks, you will gain more "fame". In DARKLANDS, they quantize your fame with a number. A moderately successful party could expect fame in the low hundreds, and a very successful party could expect a fame in the high hundreds.

Combat
The Combat system introduced in Darklands is my favorite that I have encountered so far. When you enter combat, you enter an isometric overhead view, and the graphics are simply superb for the time. You see all the little details. Combat is performed in real-time, and the characters will fight on their own when attacked, but you can pause the action at any time to give or change orders to any member of the party. Then you unpause the game and watch the character try to get that arrow off before they have to draw their sword and fight! 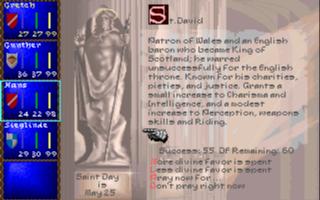 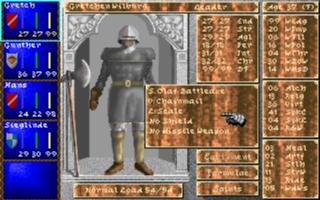