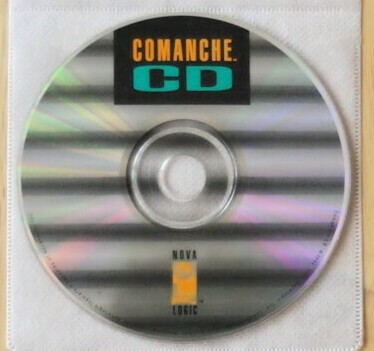 
In 1993, following Origin's lead with Strike Commander, NovaLogic released a high-end sim that needed state-of-the-art hardware to showcase itself. In fact, Comanche featured the highest realism of any flight simulator I had seen at the time. NovaLogic's "voxel space" technology yields textured, bitmapped, shaded terrain that approaches photorealism -- an amazing feat for the early 90s. The skies are particularly beautiful, with realistic streaking clouds, or ominous cloudy haze. Just piloting the helicopter through narrow winding gullies, around the strange Mayan pyramid, and over the dramatic sculpted world makes the game stand out, let along its value as a sim.

The only craft available to you is the Comanche, which is an actual army design that is then under development. Like in the actual Comanche, your helicopter's "onboard computer" automatically handles many of the interdependencies between flight settings, such as adjustments in tail rotor counterforce. I used manual tail rotor adjustment very rarely. All you really have to do is adjust the collective and tilt the main rotor.

The helicopter is limited to a ceiling of 500 feet, but this didn't bother me too much since it's much more fun to hug the terrain, and since flying low reduced the helicopter's radar image.

The game is centered around two sets of missions. The first set is called "training," and is designed to familiarize you with the helicopter. These missions are fairly easy, and cover the multiple weapon systems available to you: automatic cannon, rockets, Hellfire laser-guided missile, Stinger radar-guided missile, artillery support, and Hellfire missiles on a wingperson's Comanche. These latter must be guided by a laser from your own Comanche, which reduces their usefulness somewhat--only targets in the open and visible from a distance can be safely targeted. You get a medal after completing the first set of missions.

The enemy targets include various tanks, helicopters, and fuel storage tanks. A single Hellfire, Stinger, or cannon round respectively is usually enough to destroy the target.

The second set of missions is called "Operation Maximum Overkill." These are basically a continuation of the training series, increasing in difficulty with each mission. After completing the first three missions, you must complete the remaining ones in order. And if your Comanche is destroyed during a mission, you must complete the previous mission before attempting the failed mission again. For this reason, it's sometimes advisable to abort the mission if your Comanche gets seriously damaged.

The music in this game is average, and the sound effects, including squawking radio communications, falling artillery shells, and your talking onboard computer, are great.

I'd recommend Comanche to anyone who wants to experience prime early 90s graphics. I think the the results of NovaLogic's bitmap rendering techniques are better than those found in Wing Commander I/II. The game itself is addictive to play, and you can inject your own strategy to make the missions more interesting or challenging--using only cannon on enemy helicopters, for example. The artillery support is a great creative addition, and the fast paced, adrenaline pumping action kept my grip tight and my knuckles white. 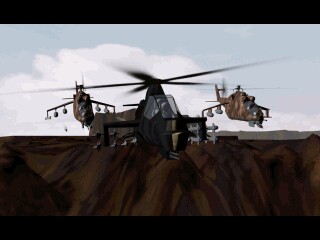 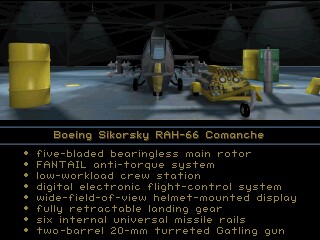 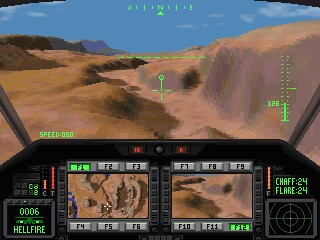 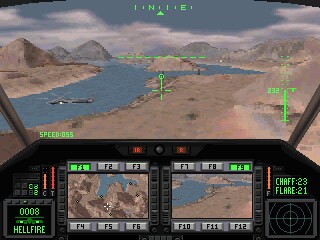