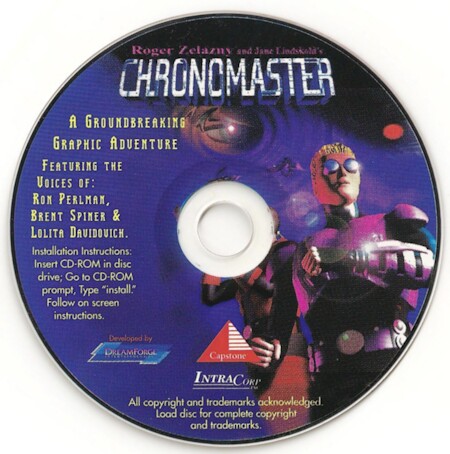 
Welcome to Chronomaster, a state-of-the-art futuristic adventure game that presents a blend of Zelazny's fantasy themes with the most real, yet visually unbelievable game creation technology. Chronomaster is a beautifully done, huge-scale fantasy adventure in which you are given no less than man-made universes to play with. It is the far future of mankind, where humans have found the secret to immortality, or better to say, time compression. This led to the creation of "pocket universes", made and run by "immortals" like you. In turn, you, Rene Korda, a specialist in universe design, have taken on a lifetime mission - to restore the peaceful existence of once created universes, which are now being shut down by someone. And that is where your unearthly experience of travel, search and survival takes a flash-start inside a shocking and magical universe of the future.

Amazingly, considering mid 90s technology, the entire game is rendered in SVGA. This means the gaming process isn't a suffering between the movie sequences. The point is, you enjoy the whole thing like a show. There are hundreds of locations in the game, and every one is worth being put in a frame on the wall as some futuristic design. The detail, texture and shadowing of your character's outfit constantly pleases the eye, and so does every object around him, every landscape and character that you encounter. Numerous actions of your character in the game are precisely depicted with the help of short (from 5 to 30 seconds), high-res. cut-scenes shown either full-screen, or in a square window inside the game environment, what makes the overall visual experience extremely appealing.

What I first found to be a bit confusing was the user interface. With about 6 starship database, 6 navigation, and over 13 action functions, my first couple of gaming hours were about as successful as a blind man's driving, due to my habit of not consulting a manual. Bad example. Still, one way or another, I finally figured out what does what thing, and actually found the interface extremely user-friendly, rather than annoying. You start out in a starship, where you are offered a whole database of terms relating to the human future, like "terraforming", "bottled time", "pocket universe", etc. as well as a quite comfortable navigation console.

There, with a click of a mouse you are able to retrieve necessary info on a universe, then the planet of your destination, choose a landing zone, and finally push the starship-symbol "go" button. When you begin your adventure on the unknown world, you are given a "folding" inventory with over a dozen possible actions to take . . . use, talk, look, push, open and check. At any point in the game you can save/quicksave/load a game, as well as adjust sound, music, even luminosity to set a perfect gaming environment.

Your character in the game, Rene Korda (a future Chronomaster, if you wish) is quick-witted in conversations with knights, jihns, gamblers, spies - those whom he thinks he meets. So even though you control his dialogs, you might be surprised when suddenly he will go ahead and work something out with them. A true companion in your search is Jester, a funny little intelligent computer that picks on you and gives warnings about possible danger. Why not - it's more fun like this anyway!

All this, as well as quick but frequent movie sequences showing some of Korda's actions, makes your character more human, real and fun for you in the fantasy universe. This helps, since the rest of the time your futuristic clone looks more like a well-trained android (which is okay since this android has an extremely cool image). Just thought you wanted to know who you will guide and protect during all those sleepless nights spent in half-magical, half-supertech worlds. Sleepless nights, because you will find yourself holding your breath while running light-speed thoughts in your mind on how to pick the right items, discover their logical purpose and advance closer to the essence of the secret that holds the planet in eternal stasis.

What totally amazed me about Chronomaster is how so much plot, fantasy and action can be put on one CD. Thousands of possibilities, decisions that must be made, and the events that will follow await you on this endless journey. The goal is somewhat trite: find a World Key that controls a planet's life, solve a beautiful final riddle... and discover that you haven't come a tenth of the way to your destiny. At least in Chronomaster. 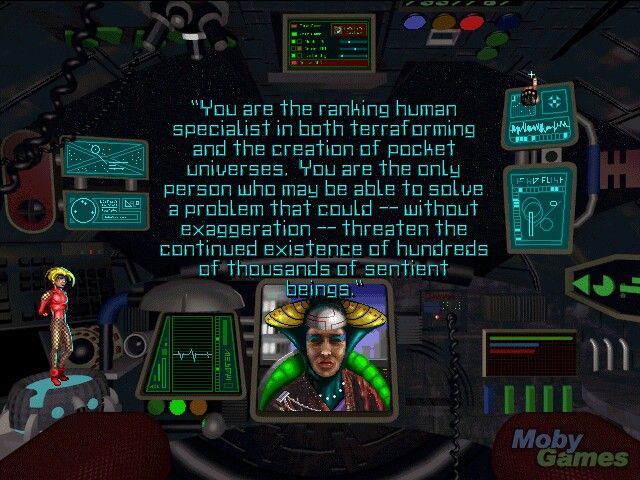 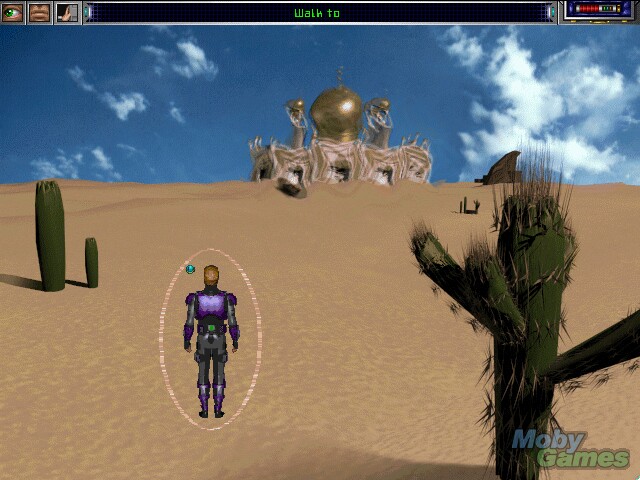