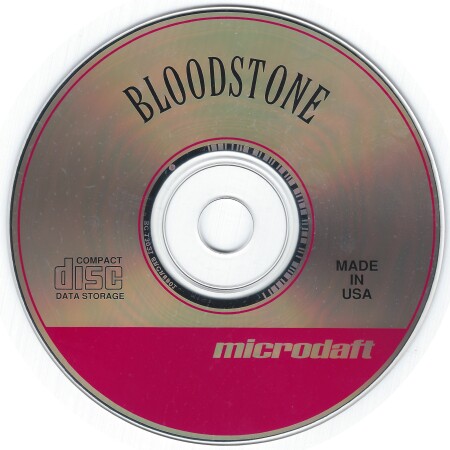 
You are the last hope of the Dwarven race. A race splitting into warring factions and subject to cruelty by gods. To accomplish this task you, as a young and promising dwarf, must take on a quest of epic proportions to retrieve Khamalkhad, the axe forged from Bloodstone, from the Castle Entemar and return it to the god Rohrkhad. With this symbol Rohrkhad hopes to reunite all dwarves and return peace to the dwarven lands.

Bloodstone is similar in style to the Magic Candle series. The game engines and interfaces of these two RPGs are virtually identical. They are, however, completely different games. Bloodstone is a brand new story (which takes place "ages before" the time of the Magic Candle) and it is a story which is quite well-told.

Your hero(ine) is male or female, but has all other attributes preset. The object of the game is to experience the story (which would fall apart if the saviour of the dwarven races turned out to be an elf or something :). To aid you in your quest, you may choose three companions from a list of eight. There is more leeway to customize characters here, as only the basic attributes of your companions are preset.

Not unlike the early Ultima games, long distance travel is party-based and in combat each character is individually controllable. However, when in some locale, be it a city, a house, etc. the party is once again individually controllable (to facilitate interactions with specific members of your party with non-player characters. There is a lot of NPC interaction in this game, as is expected in a heavily story- oriented game. Luckily, the game keeps a record of all conversations in your notepad (which quickly reaches epic proportions itself. When the game begins and your notepad is empty, it is a little puzzling to figure out what to do first. There are, thankfully, a couple of hints in the manual to get you started. The further the game progresses, the more clear the immediate objectives. I found this to be an effective story-telling technique which drew me in more and more as I spent more and more time playing.

The interface seems awkward at first, but quickly becomes familiar as you get used to its little idiosyncrasies. The most notable aspect of the interface which is non-intuitive is the fact that commands are menu- driven, necessitating navigation of the menu layers. For example, if you choose the "talk" menu for some purpose, then decide you want to check your notes, you must "end" the talk menu and then enter the "notes" menu. Luckily the game is turn-based, so you can fumble around in the menus without much consequence until you get used to it.

A nice touch is the ability to have party members fight automatically on an individual basis if desired. This can help relieve some of the tedium of combat if combat isn't your cup of tea and you just want to watch the story unfold. The automatic fighting strategies differ depending on the character type. Naturally, full manual control can be used as well.

One of the coolest features of Bloodstone is the ability to split up your party by assigning tasks to individual members. You can tell a party member to wait in your current location or go to another location and wait until you come back. This way, you can drop a companion and have an NPC join you whom you feel is more suitable for carrying out the current mini-quest. Furthermore, you can assign a companion to a workshop, where s/he will stay, learning a skill and possibly even earning money until you return. This "tasking" feature adds a welcome layer of complexity which is lacking in nearly all other RPGs.

The graphics of Bloodstone seem antiquated, but they are colorful, clear, and appealing. Magic spells, which are numerous and play a very important role (hint hint ;), are well-done and fun to watch. The characters' graphics are similarly well-done (no "who's who" confusion) and the landscape and environment is well-rendered, especially the indoor parts. The text is in a strange font which reminds me of the one used in Bard's Tale, but is has that "olde style" feel which is a nice complement to the story. During combat, which is turn-based by "sides", the graphical feel of weapons and spells is excellent for the time, on par with Darksun, though not quite as detailed).

While the story is not as involved as the Krondor series it does but beat DarkSun. Bloodstone is a good compromise and it is an immensely engaging RPG. 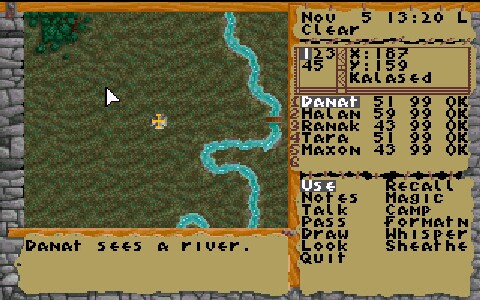 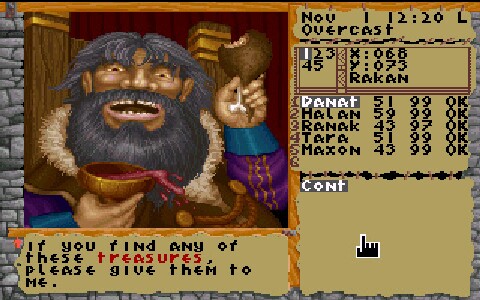