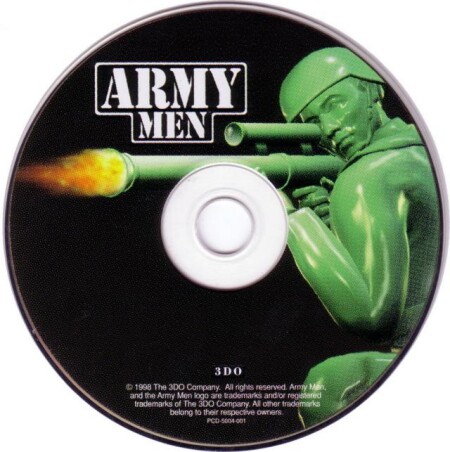 
In Army Men, you are cast in the role of Sarge, an onscreen hero who is responsible for fulfilling a variety of mission objectives set down by Green Army headquarters. You move your character around huge maps, picking up, using, and discarding different types of weapons; scooping up medkits, air support markers, and other items; hopping into and out of vehicles; and coaxing any accompanying troops into battle. At varying intervals along the way, enemy troops, combat vehicles, and various types of fortifications are dispersed across the map, deployed to stop Sarge from accomplishing his mission. When battle is joined, Sarge can fire his weaponry from either a standing, kneeling, or prone position and can evade enemy fire by diving or rolling to either side. Since Sarge can carry only three types of weapons and gear at a time, the trick is knowing when to drop certain articles in favor of more suitable items.

Interestingly, there are no independent scenarios included in the game. Instead, Army Men features a grand campaign game, which is segmented into three sequentially playable mini-campaigns. You begin the game in a desertlike region, eventually move on to an alpine setting, then finish your tour of duty in bayou country. Each mini-campaign is further subdivided into four scenarios, which, in turn, are composed of two to three interrelated missions played out across huge battle maps. In the process, you are slowly brought up to speed regarding the progress of the war with the evil Tan Army, which at times may be further augmented by units from the supposedly neutral Blue and Grey Armies.

Army Men also comes equipped with an informal boot camp, whereby you receive rudimentary training on the game interface, on how to use each type of weapon, and on how to issue orders to different combat units. You meander through a stylized shooting range, learning how to control your character, identify weapons caches, shoot rifles and bazookas, toss grenades, fire mortars, and handle flamethrowers. You are also taught how to lay mines, detect and unearth enemy minefields, plant explosives, call in air strikes and photo reconnaissance missions, drop paratroopers, and lead squads of loyal plastic soldiers into battle. In addition, you learn how to operate several different types of WWII-era combat vehicles, spanning everything from a jeep and a 2 1/2-ton truck to a half-track and a tank. Apart from the truck, each vehicle is outfitted with a rotating turret, which can train and fire its weapon across a 360-degree arc regardless of which direction the vehicle is moving.

Missions run the gamut, from simple reconnaissance operations to full-blown search-and-destroy operations involving multiple squads, several combat vehicles, and even air support. The typical mission brief usually entails moving Sarge from one map sector to another, sometimes requiring him to conduct special tasks along the way. Fortunately, it's always up to you to determine Sarge's route, what types of weapons he'll carry, discard, or use, when and where he'll confront the enemy, how he'll disperse any accompanying units, and how he'll employ any and all supporting arms. More importantly, gameplay is far from linear. Objectives can usually be reached using multiple avenues of approach, a variety of weaponry, and a wide array of battle tactics. For instance, instead of going toe-to-toe with an enemy tank and perhaps risking Sarge in an all-or-nothing engagement, you can try to lure the onrushing tank into a hastily sewn minefield. Alternatively, Sarge could be ordered to blow up a crucial bridge thereby preventing the tank from interfering with the mission at hand. Similarly, Sarge could order in air support, hop in another combat vehicle, or send in troops to destroy the tank while he watches from a safe vantage point. As a result, you are not bound by any predetermined set of rules and instead may fulfill the mission objectives any way you deem necessary.

Army Men's combat animations are first-rate. Destroyed combat vehicles are flipped over or smashed into little pieces, a broken axle flimsily lying alongside the smoldering wreck as if to say these are still nothing more than glorified war toys. Explosions too are well handled with vibrant spouts of flame and choking debris showering the battlefield. The sound effects are equally superb, typically depicting men screaming in agony as they're continually burned, bombed, run over, or blown to smithereens. About the only thing missing is the flat stand-up bases, which have come to epitomize the weak-kneed plastic soldiers. Army Men successfully melds the old with the new, taking an ageless pastime and literally, as well as figuratively, giving it new legs. 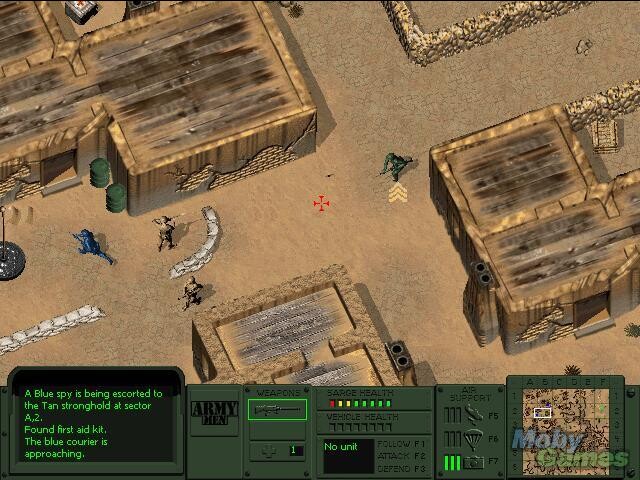 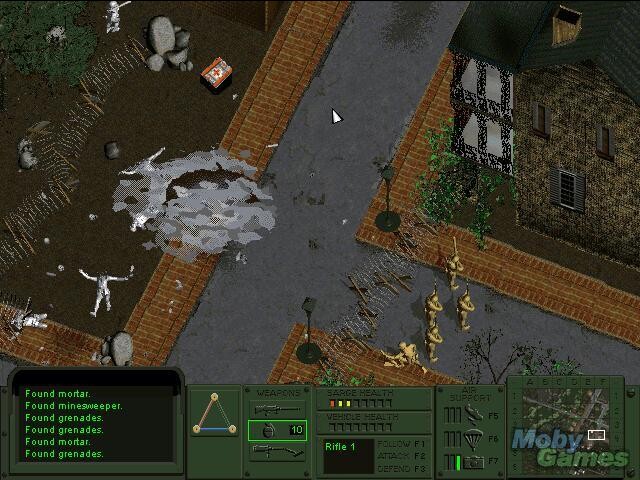