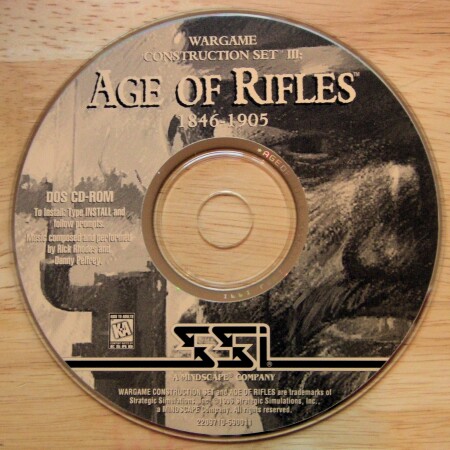 The Game
Wargamers know quality when they get their hands on it. And true hard-core players demand three things: realism, control, and depth, and SSI could always be relied upon for all three. In the mid 90s SSI gave us the cult hit Tanks: Wargame Construction Set II, which captured the vast sweep of armored warfare. Follwing their unqualified wargame success, Age of Rifles: Wargame Construction Kit III, SSI turned their attention to the bloody period when muskets gave way to the rifled barrel.

Rifles kicks off in 1846, when the rifled gun barrel first allowed soldiers to fire with greater accuracy and at longer distances. The massed formations of the Napoleonic era were coming to an end, since charges could now be met with a deadly hail of accurate fire. But tactics hadn't caught up with technology, and generals still clung to obsolete military doctrine. The result was a bloodbath such as the United States suffered in the Civil War, with disproportionately high casualties. These same tactical transformations were going on throughout the world, as Europe tore itself on the teeth of Teutonic aggression, the British tried to hold together their far-flung empire, and the Russians and Japanese battled for Manchuria. Aside from the American Civil War, the current epoch isn't given much attention, and as the last technological upheaval before the age of armor, it deserves it.

SSI's approach to rifled warfare is superb. The engine for Rifles puts the user in as much - or as little - control as he or she could possibly want. From the start, there's an attention to small details. The graphics and sounds are sharp for the period, and three different sets of unit icons are offered: military symbols (à la paper wargames), "miniatures" featuring little men on stands, and a separate set of little guys without stands. The player has access to detailed information on each unit, from the number ofmen to the make and model of their weapons. Careful modeling is done on command, morale, strength, and other important factors, combined and represented as a "wallop factor" that designates how hard and well a unit can attack.

Control is simple drag-and-drop to give units movement orders, and differently colored cross-hairs show attack options and their probability of success. You're also in control of each unit's facing and formation (crucial elements to strategy), though these can be automated for users who just want to kick ass without fuss. Units can be moved as individuals, stacks, or entire commands with their historical leaders, and leaders can be transferred for maximum effectiveness. There are countless units in Rifles: infantry, artillery, and cavalry from numerous armies, ranging from Union and Confederate, to British, Russian, Japanese, Zulu, and beyond.

Scenarios are plentiful and well-constructed, with numerous interesting encounters that can swing on a single bad tactical decision. The variety keeps things interesting, and the many gamers who buy Rifles primarily for the Civil War encounters will find the notion of playing thousands of Zulu warrior arrayed against the British Army irresistible. Campaign games carry your success through a series of linked battles. If this isn't enough, then maybe the most powerful scenarios builder ever made at the time will impress you. Not only can you make maps and custom missions and campaigns, but you can create units and equip each one, right down to their shirts, shoes, hats, and boots. A little "paper doll" soldier lets you recreate the distinct uniforms of the period, as well as the character of each unit. 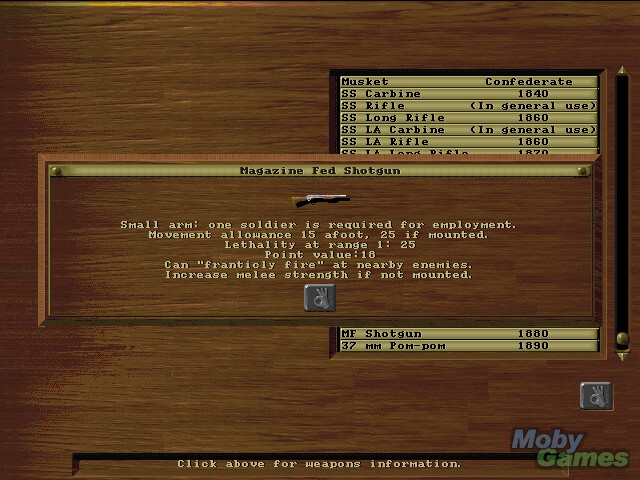