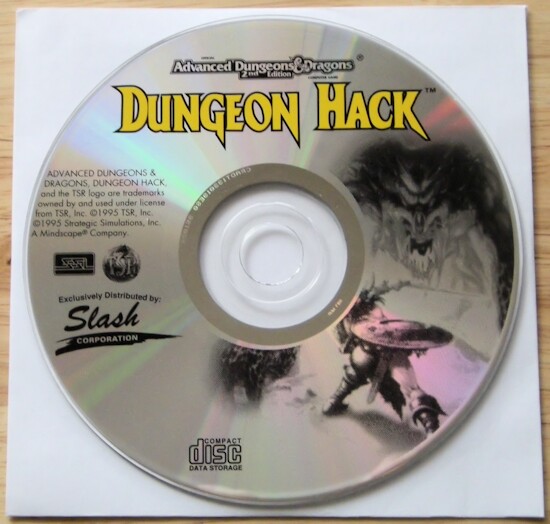 
When I first picked this game up in the early 90s, I was not expecting much. I expected this to be a pure gimmick game -- take the Eye of the Beholder graphics, write in an off-the-shelf maze-creation program, slap the name "Hack" on it, and it will sell, right? I expected a simple dungeon generator (perhaps with a few bugs making some dungeons literally impossible) with limited special items, monsters, and simplistic puzzles. While partially right on the novice puzzle aspect, I was dead wrong on the others. The designers have created a polished game that stands on its own.

Character creation is everything one would expect from one of SSI's official AD&D games. There are six races and twelve classes to choose from and multi-classed characters are allowed. Fiddle with the numbers until they suit your desires, pick a name and a portrait, and then you're off to the dungeon! As soon as you make one, that is.

The dungeon generation part of this game is a real masterpiece. The dungeon can be customized in just about every conceivable way to accommodate the amount of time you want to spend playing, your character class, your skill level and personal preferences. This is where the game shines. Did you really like Lands of Lore but was annoyed by getting poisoned all the time? Simply lower poison effects to suit your wishes. Did you find Ultima IV fun, except for but running out of food far too often? Slide the food availability lever a bit to the right. Want a hardcore challenge? Turn up the monster difficulty, add extra pits and traps, increase the number of levels in the dungeon -- problem solved!

In all, there are 19 sliders and switches to play with, controlling everything from dungeon depth to water levels and magical zones. Favorite settings combinations can even be saved if desired. If you don't want to be bothered with all these decisions, you can use the built-in easy, medium, or hard settings.

The dungeon creation goes relatively quickly (under a minute) and then the adventure begins. The object is to reach the lowest level of the dungeon and defeat the powerful "boss" monster. The interface is true EOB, with a first-person view, 90-degree rotations and real-time combat. The graphics get the job done and include some nice magical effects and interesting monsters. There are over 90 spells, 90 weapons, magic and regular items, armor, scrolls, books, wands, over 50 monsters and even musical instruments present in the game. This is a huge plus, especially considering the somewhat limited variety of walls and decor. There are a few interesting dungeon objects (such as the "vending machines" as I like to call them) but it won't take long to see most of them.

If you are fond of a particular dungeon or want trade dungeons with friends, the game provides the random seed used to create it and the seed can be re-entered to generate the exact same dungeon!

Most of the puzzles are of the "find the right key for this lock" variety, with a few illusionary walls and hidden buttons to press thrown in. One nice feature is the ability to specify multi-level puzzles during dungeon creation where objects found on a particular level are needed to pass a later level.

In addition to the familiar attack, cast spell, and inventory options during play, the player may call up the "camp" menu which has some interesting selections. You can view the "Hall of Fame" screen to see how you're doing compared to other adventurers. One of my favorite options here is to view the "Creature Totals" screen which gives totals of each type of monster you have vanquished. Seeing that you obliterated 15 Umber Hulks can be a great ego booster!

Each level of the dungeon is fairly large and hence it can be fairly easy to get lost. If you wish, you may call up the full-featured automap to relieve some of the confusion. There is even a selection to print out the map at any time! I find this to be an excellent touch.

Dungeon Hack surprised me by being a refined game which stands on its own quite well. I appreciate the large variety of monsters and items. The dungeon creation aspect is truly excellent. The graphics, while not exactly state-of-the-art, are decent. The only things which detract from the overall presentation of Dungeon Hack are the sometimes repetetive-seeming decor and walls (still better than the original Hack though :), the lack of background music and. If you like the general adventuring concept found in Hack, it is highly unlikely you will be disappointed with Dungeon Hack. 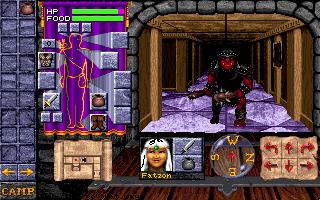 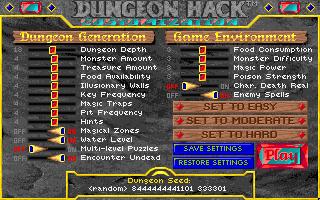