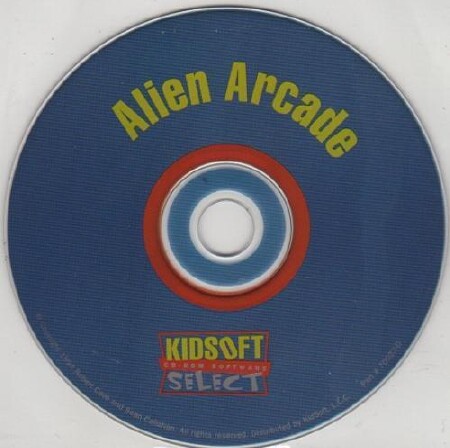 The Game
Alien Arcade is a mid 90s games collection aimed at younger players. The games are all controlled with the mouse, and all have the same theme of aliens and outer space. The graphics are colorful and cartoony, and the arcade action is designed to be non-violent and kid-friendly. Each game has its own highscore table.

There are six games in the collection.

Andromedroids: in this game you build up robots one piece at a time, by dropping them into one of seven assembly bins. There is also a recycle bin for dropping unused parts, and a special bug bin for dropping Mercurian Metal Bugs that may appear. Dropping the bugs in any other bin will cause damage to your robot parts.

Fungus Patrol: you control a ship in the middle of the screen that can only rotate, but if you click the mouse, the ship shoots out in a straight line on a bungee cord, touches the edge of the screen, then snaps back to the center. Green fungus encroaches in on you from the edges of the screen, and you clear it up by hitting it with your ship, which has a big suction nozzle on the front of it. The fungus can damage your bungee cord, and if it is completely eaten away, the game is over.

Nerdoids: you control a ship at the bottom of the screen that can only move left and right, and shoots comic books. Moving across the screen, on multiple levels, are orange aliens wearing glasses. If you hit an alien with a comic book, they will start reading it. If you hit an alien already reading a comic book with another comic book, they drop the one they are holding. The aim is to have all aliens still be reading a comic book when they leave the screen. The aliens will also randomly drop calculators and pocket protectors, that can subtract 5 comic books from your arsenal if they hit you.

Quasar Klutzes: you control a ship at the bottom of the screen that can only move left and right, and shoots bananas. There are blue aliens walking back and forth on multiple levels. The aliens are clumsy and will either slip on bananas, or two aliens may collide trying to grab the same banana. They will then start falling towards the bottom of the screen, but if they hit your ship while falling you lose 5 bananas. Your goal is to cause all the aliens to fall. There is also a robot dog that sometimes appears, and drops clouds of gas that subtract 2 bananas from your ship if they hit you.

Quasar Rain: this game takes place "underneath" Quasar Klutzes. Blue aliens and banana peels are raining down from the top of the screen, and you control a spring-loaded platform that slides left and right at the bottom of the screen. When an alien hits you, they are flung over to a wall of bunk beds on the left side of the screen. The aim is to avoid letting 3 aliens fall off the bottom of the screen (although the instructions assure us that the fallen aliens will be caught by a safety net, just off-screen) and also to avoid the banana peels, as they lose you points.

Stink Snakes of Saturn: you control a ship on the left edge of the screen that can only move up and down, and shoots pies. Yellow snakes appear from the right and slither towards you. If you hit a snake with a pie, it turns into a smiley face, that you can collect for a point bonus. You have a limited number of pies. If a pie misses, it will bounce back towards you, and you can collect it again. However, if a snake gets past you to the left edge of the screen, you lose 5 pies. When you have no pies left, it is game over. 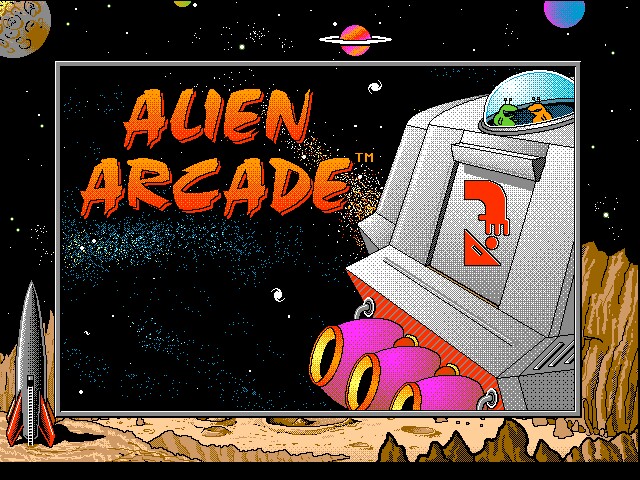 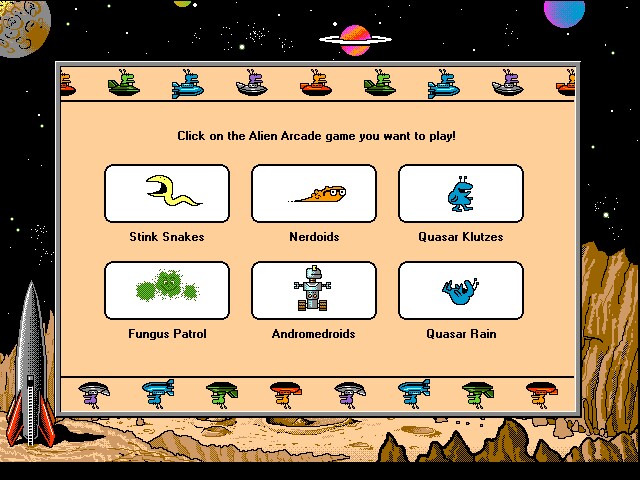 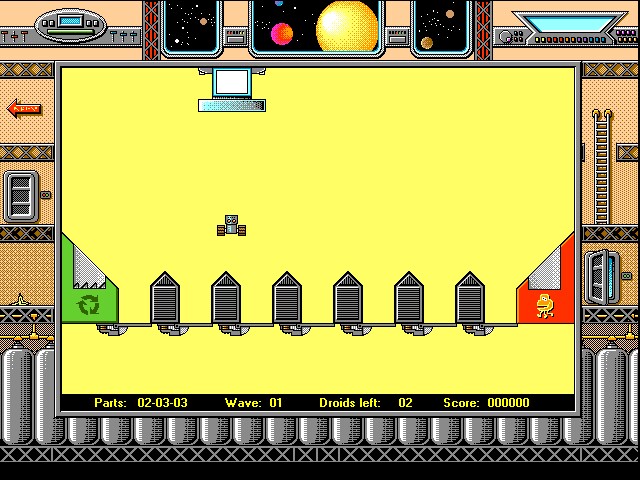