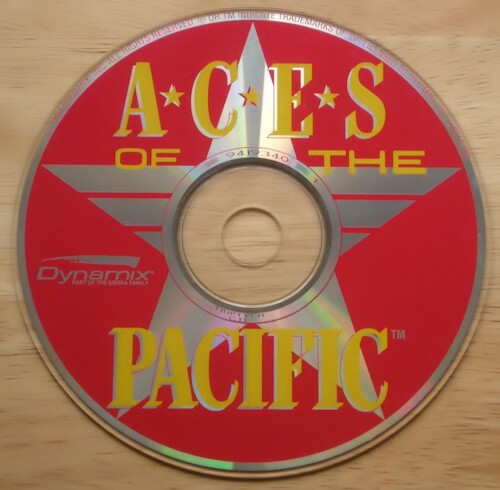 
Remember that wonderful flight simulator of the early 90s, Red Baron? Well Aces of the Pacific is Red Baron upgraded, and with a kick in the pants. It takes the look and feel of the World War I Red Baron era to the War in the Pacific portion of World War II. Red Baron fans will feel right at home with the look and feel of this one. In fact, you may wonder on your first flight or so, just where the improvements are. They're in the details.

Unfortunately, you can't fly the bombers (B-xxx), just the fighters, but some of them will allow you bombs and rockets. There's also the US Marines, but as would be expected, they use the same planes as the Navy. Each of these planes is put together with great attention to detail. When you fly close enough to one, or just look at one with the built in viewer, if you want to take the LAZY way out, you'll even see the markings on the wings and fuselage. The interior shots are nicely done as well - if you take a look backwards and you've got a gunner, you'll be treated to a nice shot of his (hooded) head.

Each plane has the appropriate armaments, and its own characteristics. Some turn better at lower altitudes, some have better shielding, some dive better. It'll really be an asset to you later if you take the time to view all the different aircraft, and find out why you want to be piloting a B-17E instead of B-17D, before you have four A6M5s on your tail.

The planes are limited by the technology of the time - i.e., no radar, so everything is visual. No zooming in and out - you gotta get close to see what you're hitting. No target acquisition or heat-seeking missiles - you have to line up the guns yourself! Yes, all you F-29 / F-117 / Falcon jocks, imagine a time before microwaves, a time before color TV. Your guns can jam, your engine can catch fire if you overstress it. You don't get any warning if you get too close to the ground.

You've got two basic views - internal (from the cockpit) and external (a couple feet outside the plane), and variations of that (look up, look left, etc). Aces of the Pacific uses a slick method involving the second joystick button to select the different views. Internal view is your best bet for dogfights, external is occasionally good for bombing. Even the damage is well done. Engine fire produces very real-looking smoke, you get bullet holes in the canopy and blood when you get wounded, even blackouts and redouts if you pull too many Gs or get hurt too bad. I was so impressed when I first got hit that I got torn to shreds as I was admiring the graphics. I would imagine this is something that would only happen in a computer game...

You've got plenty of options on flying. First, you choose who you're going to fly for: US Navy, US Marines, US Air Force, Japanese Navy, or Japanese Air Force. Then choose to fly a single mission, or take a pilot through a career. There are no less than ten different single mission options.

Once you've selected a campaign, choose one of many missions. Some campaigns, such as Coral Sea to Midway, have over a dozen missions, and others, such as Pearl Harbor, have only one or two. You too can participate in the raid which sank the Soryu! Or, you can change the very course of history by preventing it (at least for this time) from the Japanese side, or by completely bungling it from the US side. Just think, if YOU had been one of the protectors of Midway, you might be drinking sake while you read this, instead of swilling Coke. Never mind that, though, take out your frustrations by blowing up a few buildings in a training run, where they won't fight back, tough guy.

You can also dogfight a famous ace, from any of the five US and Japanese military branches. This is one place where the attention to detail really shows - there's a picture of each one of them, as well as a short description of their career. Cheat by making yourself invincible! Or instead of dogfighting one really good pilot, dogfight a squadron of pilots.

You can adjust many game parameters, including the weather. And then there is the realism panel. After a couple encounters where your engine catches on fire because you pushed it too hard you'll be heading for this, available at any time. You can turn on or off any of the following: Sun blind spot; Realistic weather; Gun jams allowed; Engine burnout; Blackouts allowed; Limited ammunition; Limited fuel; Aircraft may be damaged; Midair collisions; No inflight info. Most of these are self- explanatory - for instance, if you're flying into the sun you won't be able to see very well if you have Sun blind spot on. No inflight info will turn off the handy messages that appear at the top of your screen every now and then, such as the dreaded "You just shot down a friendly airplane!" You can also choose your combat level and flight model (Easy, Standard, Intermediate, Hard, Expert). Your score is adjusted based on the options you chose - the harder the settings, the larger the score.

The graphics, as noted, are incredible, with good attention to detail. You get small movies for being awarded a medal or promotion, shots of a hospital if you get wounded, appropriate backgrounds for menus depending on whether you're ground-based or carrier-based, etc.

Every flight can be recorded and then played back using the quite comprehensive Mission Review mode (think of it as a big VCR which lets you change point of view at any time), and you will get full detail, but darn it, I'd like to have it while I'm blowing things away!

When I first tried this game in the early 90s the wealth of options ensured I did not become bored for quite a long time. Learning the personality of each plane takes a while as well. I finally figured out that you can't try to climb at more than a marginal angle with a TBD Devestator, and that the best way to take out a plane with a P-38 is to lure it up to about 25000 feet or so, where it has the advantage because of the superchargers.

The dogfighting and bombing are still great fun, and the graphics are great for the time. The pilots seem to be fairly intelligent. I love being able to play the Japanese and choose all the different planes. I like that I don't spend 15 minutes in transit from one place to another. The replay mode, where you can choose your camera angles and replay the entire battle, is great. The sight of smoke pouring out of a bomber as you pound it with your bullets (which you finally see as tracers), or the impact of your rockets on ships and the towering inferno that follows are infectious. 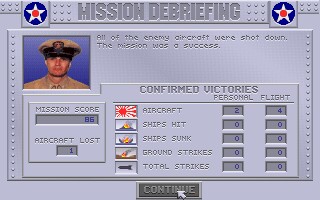 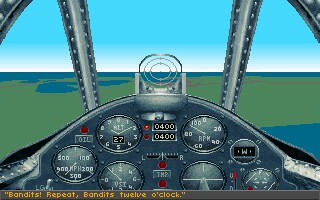