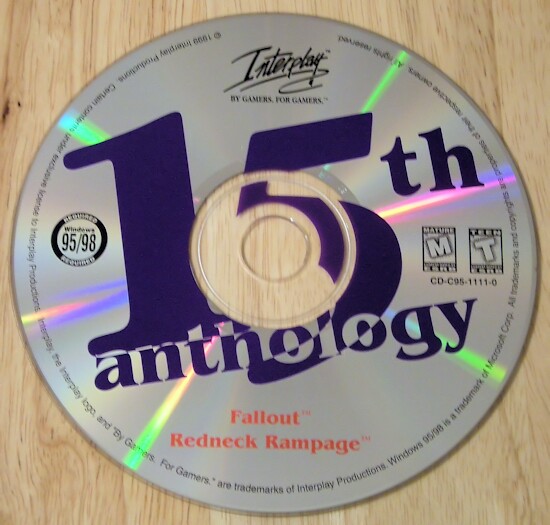 The Game
Enter Fallout, a game with all the depth of its RPG brethren, but one that takes place in the post-apocalyptic deserts of the future. Instead of gobblins, you’ll get mutants. Instead of archers, you’ll get gangs with rifles. Instead of broadswords, you’ll get sub-machine guns and shotguns. Instead of piles of books about the history of some bullshit magical kingdom that never existed, you’ll slowly unravel a rather political and conspiratorial puzzle of why the world that was got torched.

Fallout takes place about 70 years after a global thermonuclear war wipes the slate clean. You don’t know what happened to the rest of the world, but you are playing in a clearly recognizable area of the US (which I won’t reveal, since part of the fun is wandering around the map, slowly removing the fog-of-war to discover…) Survivors, of which there are few, have been slowly rebuilding primitive societies amongst the arid wastelands and steel skeletons of former cities. It’s sort of a return to frontier days, with banditos roaming about, kind folk banding together in villages for protection, and everyone fighting to get what they need to survive – often any way necessary.

Meanwhile, a number of pre-war “Vaults” lie buried in the mountains around the land. They were designed to hold and sustain communities of survivors until the outside world could support life again. Many survivors come from such Vaults, often forcefully due to outside raiders or internal turmoil, but a few Vaults are said to still exist, possibly uninhabited, and filled with pre-war supplies and treasures.

Coincidentally, you play as a survivor born in a Vault with no knowledge of a previous or surface life. A wise old man was elected “Overseer” long ago, and for years has deemed the surface too dangerous for anyone to leave. He has his reasons – no communication with the other Vaults, lingering radiation, outsiders raiding the Vault for its goodies – but some of his charges feel they can’t stay underground forever. Now all we need is a kick in the pants to get this story going, which comes in the form of a broken water recycler that’s causing the Vault to run dry. The Overseer selects you as THE ONLY MAN FOR THE JOB™ and sends you out into the wastes to search for, and hopefully scavenge from, the nearest Vault.

Your story thus begins as you discover cities and people of this new society, decide what to do with the valuable secret of your Vault’s knowledge and existence (protect it, or stroll around proclaiming “Ya! I came from a Vault! It’s over there!”), and find a water chip to save your people. At least to start. There’s an enormous amount of side-quests as well, and an even larger main quest after you find the chip. And, throughout all of these, there’s a large variety of choices and methods you can employ to get the job done.

A lot of it comes down to what kind of character you want to play, and Fallout’s character-creation system is second to few. At the beginning of the game, you apply points to a number of familiar pen-and-paper stats (strength, agility, charisma, etc) that form the base of your character. Typical sacrifices have to be made with logical consequences – lower your strength and you can’t carry as much, lower your intelligence and your conversation options are limited (even all the way down to grunts and dopey looks). These in turn affect a separate list of skills, such as guns, repair, speech, and you choose a handful of favorite skills to “tag” to learn at a faster rate.

Finally, you have the option of picking from two “traits” that offer some form of obvious bonus with an equal penalty elsewhere – like being proficient at first aid at the cost of fighting skill. You earn experience as you progress through the game, which earns you new levels and the ability to add points to skills at each level. You’ll also get to choose “perks” at various levels along the way, which are like additional traits, and provide things like bonus carrying capacity or resistance to radiation.

This allows you to create a number of possible characters skilled in vastly different areas. And though some combat skill will of course help you (it is a dangerous world out there, and you can’t really negotiate with mutant rats), if you apply yourself to more peaceful areas like stealth or diplomacy, you’ll be able to get through the game just the same. That is to say, unlike many other RPGs offering similar “freedom,” a highly skilled fighter does not mean an easier game, and all disputes aren’t best settled at the end of a gun. For one, wanton killing will affect your reputation. For second, beefing up combat at the cost of speechcraft means you’ll end up talking your way into more fights.

You’ll also be missing the best part about the NPCs – their unique personalities and clever dialogue. It’s quite interesting to see the different outlooks and societies created by the individual settlements out there, and seeing how their environment shaped them. You’ll also find very few people who were around before the war, so it’s great fun to learn what happened to pre-war institutions and see various pieces of that history discarded, or given an unintentional practical use – like the town gates made out of rusted hulks of luxury cars, or the bottlecaps used as currency. NPCs will also be your primary sources of kit in the world, from store owners to caravans you pass in the wastes, and you’ll have to learn the economy of trade. Various character skills can also help you get better deals.

Though when diplomacy fails and it comes time to rumble, Fallout’s combat system is up to the task. It’s a wonderfully strategic turn-based system, similar to previous games like X-Com. Your various character attributes will determine how many action points you have in a single turn, and these are spent moving, pulling snap shots, or stopping to aim at specific parts of your opponent. The results are nothing short of brutal, with the ability to cripple limbs, shoot out eyes, or rend enemies limb from limb with heavy automatic fire. Of course, some caution must be used as any of these grisly handicaps can happen to you as well.

It’s not really enough to call Fallout a refreshing change in both style and content. It’s not enough to point out that it rightfully won Game of the Year from places that give that kind of award out. Lets just go with highly recommending it, and send you out to find it. Go on. Pip pip. 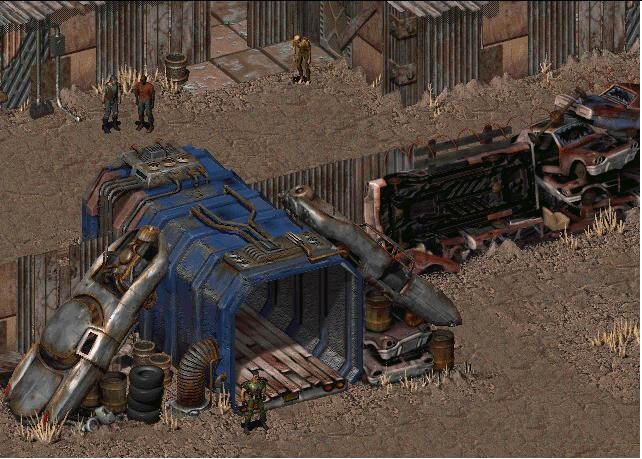 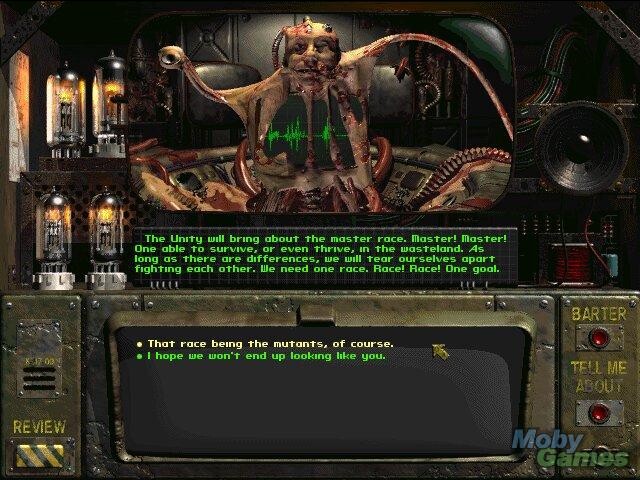