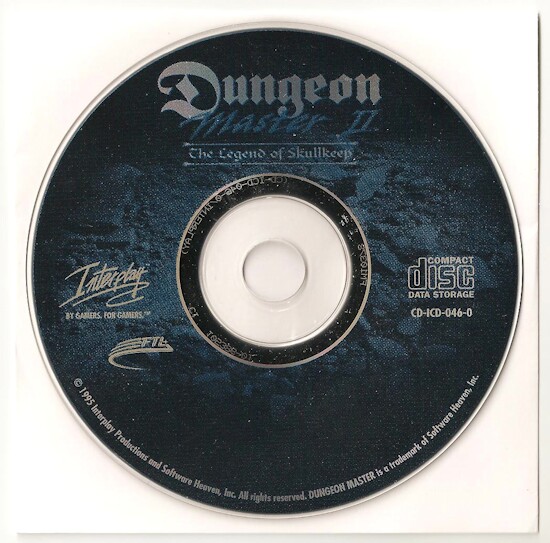 Actual Game
The Game
Dungeon Master II is the sequel to the original Dungeon Master game released in 1986. In this chapter your goal is to seek out the Zo Link machine, which controls a portal between peace for your land of Zalk and domination by the evil Dragoth. You may select from one to three other champions to assist you in this quest.

The main game playing level measures about 10,000 square units, with several smaller areas above and below the main level. Players move through the area one square at a time, and are presented with a first-person 3-D view from the current square. This view is also where various elements (levers, objects, etc.) may be manipulated. There is a nice variety to the surroundings, which consist of forests, hedge-lined paths, marshes, stone dungeons, earthen caves, etc. Rain and thunderstorms may occur outdoors, with occasional lightning ground-strikes during very severe storms. Actually, I thought it rained too much. Those players interested in mapping the game area will be pleased to know that all barriers are one square in size, and pits in a floor line up with holes in the ceiling on the level below. Several tools are available to assist mapping. The game may be saved at any time, in ten different positions.

A wide variety of creatures, each with their own characteristics, roam the playing area. Some burrow under the soil, some walk, while others fly. Some may not attack unless provoked, while others always attack. Those with some intelligence will try to avoid thrown weapons or cast spells. A battle is not always necessary if you can run. The most annoying creature I encountered was a hovering yellow Attack Minion. It would seem to appear from nowhere (althought it came along a valid path), and then inflict heavy damage with its lightning bolts. Personally, I prefer to explore and map such games in a relaxed manner, finding a battle more of an irritation than a challenge.

Weapons and magic spells are important to help you in your quest. These may be found scattered around the playing area, or purchased from several specialty shops. I thought the animation done by the shopkeeper during purchasing, bargaining, or selling was imaginative. Spells are formed by selecting a sequence of symbols, but the multi-step spell-casting interface can be awkward during a battle.

Maintaining the well-being of your party members is also important. Food and water are occasionally necessary, but I did not find it much of a hinderence. After a battle, members may need to be healed or cured from poison. Walking into an obstruction will cause injury, meaning that walking into a wall to see if it is really an illusion is not the best solution.

At the time I found Dungeon Master II to be quite satisfying in terms of its playing area size, variety of surroundings, creatures, and attention to realism details. It is a step up from the "Eye of the Beholder" pure dungeon-centric games. DM II is a great example of an early 90s POV RPG. 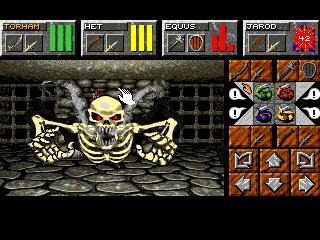