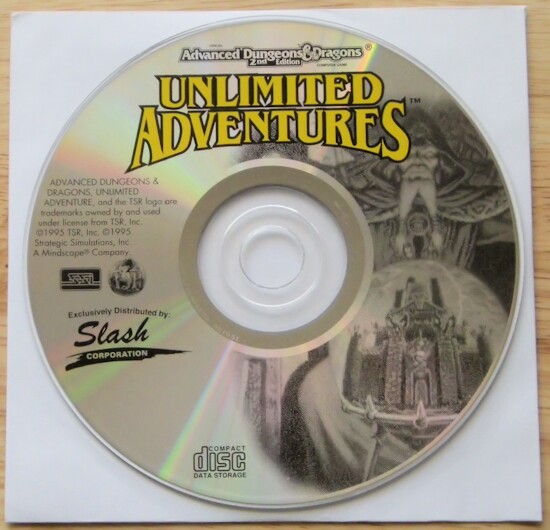 
SSI made Advanced Dungeons and Dragons RPGs for many years, most in the legendary Gold Box AD&D format. Unlimited Adventures allows you to design your own adventures by providing the drivers game system used in the Gold Box games and combining this with editors to custom design events, monsters, treasure piles, dungeons, cities, and entire worlds. With enough time, it is even possible to duplicate one of the existing Gold Box games. Unlimited Adventures is easily the best adventure construction kit of its kind. This game designer was extremely popular because it allowed fans of the SSI series to design their own games, from start to finish, without any programming required. Even today you can find tons of adventures on the Web that were made using Unlimited Adventures. I spent many months writing my own epic sagas and still have them ten years later. It makes the game personal, and much more fun.

The process of designing a full adventure is challenging, as you might expect, but exceptionally rewarding when its all done. It is simple enough to construct a single dungeon with monsters and treasure, but construction of a full-fledged adventure with an actual plot requires planning. Fortunately, the kit requires no special devotion to use it to play adventures created by other amateur designers.

Each adventure can include up to four wilderness modules and up to 36 dungeon modules. However, depending upon how one links the dungeons together, two or more dungeon modules can be combined to form a single larger dungeon, or one dungeon module can be used for two or more smaller dungeons. Moreover, the term dungeon is too restrictive. In Unlimited Adventures, dungeons can actually be cities, caves, towns, towers, castles, woods, deserts or swamps, depending on the artwork and events selected.

Creating a wilderness module is fairly simple. Each designer can use one of the five default maps included or he can create his own map. From the point of view of the computer, however, the appearance of the map is irrelevant. It may look like a castle on the map, but unless the designer has placed the appropriate events on the map, no castle exists. In fact, the game will play just as well with a blank map, with a picture of a bird, or with any other artwork that fits on the screen. Each wilderness map square is designated as passable or impassable. The designer can place up to 100 events on the passable squares, including, of necessity, transfer events allowing the characters to enter the various dungeon modules.

Dungeon modules are significantly more complicated and more interesting to design. Unlimited Adventures provides a very handy dungeon module editor which allows the designer to select the dungeon's backdrop (essentially, the floor and ceiling types) and to place individual walls, doors, openings, locked doors and secret doors. A limited variety of wall types are available, including stone, brick and coral, as well as some outdoor types such as trees and bushes.

Each module, wilderness or dungeon, can include up to 100 events. Event is a term in Unlimited Adventures which refers to all of the possible ways the game can interact with the characters. There are a total of 35 different event types including the basic Combat, Give Treasure, or Text Statement and more complicated events, such as Quest Stage. Even the simplest events, like the text statement event, allow the designer to specify the conditions under which the event will occur. Thus, for example, there can be a text event that will occur only if there is a thief in the party. Events can also be linked together to form complicated branching sequences. For example, a group of ogres could ask the party (via the Question - Yes/No event) if they want to undertake a dangerous mission. If the party answers "No," the ogres could attack (via the Combat event). If they say "Yes," a text event could describe the mission. Each of these events can be linked to additional events so long as the 100-events-per-module limit is not exceeded. These triggers can either go off every time, or in very specific situations (certain race or class is in the party). If the above seems overwhelming, in a nutshell, event types can range from menus which chain to other events, combats, puzzles, or teleporters. Events can also be set to happen repeatedly, or only once.

Unlimited Adventures comes with a library of 127 default monsters and NPCs. All of these beings can be edited. Changes can be minor (such as increasing an Orc's hit points by one) or major (renaming the monster and changing each and every characteristic, power and ability-in effect, creating a new monster). The default monsters can be restored with one click of the mouse.

In summary, this is an excellent tool for fans of the Gold Box line who have always wanted to create their own adventures. You do not need to be a programmer to use this construction kit, which makes is all the more accessible and fun. 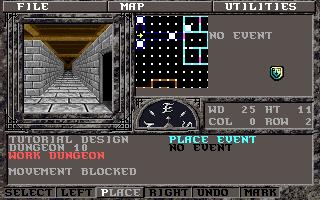 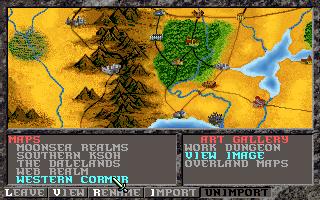