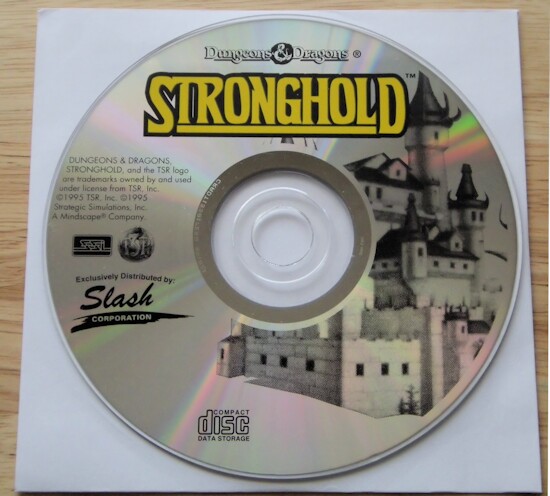 
Here is how Stronghold can best be described in context to the games of its era: Take one part Sim City, and add two parts Dungeons & Dragons. Sprinkle some elements of Dune II. Then throw in a dash of Populous, a pinch of PowerMonger, and stir. Yes, it seems to be a strange brew, yet it works. Stronghold combines variety with resource management in an enjoyable playing experience.

To begin the game, you create a world. Alternatively, you can load a predefined world. There are five pre-set worlds, plus a city already in its formative stage to get you started quickly, as well as a Random world. Once you choose the world in which to play, you specify the aggressiveness of your enemies, from peaceful to hostile. At this point you area ready to create your baron or baroness.

The baron is your alter ego, the leader of the pack. Your goal is to get promoted a number of times, and to achieve the rank of Emperor. One excellent feature of Stronghold is that the promotion requirements vary depending on the alignment of your leader - a Lawful character wants to get promoted by keeping his people happy; a Chaotic character has to destroy all enemy strongholds to win; and the Neutral character must fulfill both. This adds variety to the game, and is a welcome addition. To create your baron, you roll your stats, and choose a profession and an alignment. Once created you select a good starting location on the world map.

The terrain is presented in two display areas, one small, one large. One of these will show a first-person type of view, which displays terrain, elevation, features, while the other display shows a bird's-eye-view, greatly reduced, which shows your units represented as small white dots. Enemies show up on this display as red dots so it's easy to get a feel for the shape you're in. You can flip-flop the two views to display the overhead view in the larger window; this then shows the first-person view in the small window. The first-person view displays mountains as polygons and uses bitmaps for the trees.

The larger display usually shows the first-person view, and you can change the area displayed by clicking on the overview display, or by using the arrow and keypad keys to move the active window around.

The graphics are well done for the time and look great. As buildings are constructed they appear on the first-person display. Even when a building or field is constructed behind the square you're viewing it appears (drawn using the proper perspective, of course) in the square you're viewing. So you really get a feel for the activity taking place in your settlement. In addition, the general colors of the ground and surrounding elements change with the seasons, which is another nice touch.

Once you place your baron you'd better get moving because that is when your enemies begin their building efforts. Do not worry -- you can create up to five lieutenants who are under you in the command structure. Each one will have his own stronghold and is ready to serve you. The lieutenants are created just as you are, by rolling stats and choosing a class/race.

The class is significant because as your population grows you attract only followers of the same class. That is, a fighter will only attract fighters, a mage mages, and so forth. Therefore, you want to have a good mix of classes and/or races in your top leadership. And since different classes provide different advantages, there's a balance to be achieved in what you choose.

One thing to keep in mind is that although you are responsible for the entire settlement, each lieutenant has to keep his own troops happy, as far as providing food, housing, and income. Therefore, it pays to keep track of who is building what.

The only way to win in Stronghold is to have lots of population at your disposal. Therefore once your lieutenants are created, you need to expand like crazy. This is accomplished by improving the land a la Sim City. Each square on the map has up to 4 building slots which can be improved. Building something like a plot yields food, whereas a house provides housing and food storage. Other specialty buildings can be built, like granaries, marketplaces, weapon and armor crafters, and many more. There are about 50 different types of buildings. Of course, everything costs money to build, and some of the more advanced structures aren't available until you move up the promotion ladder. Many structures can also be upgraded, and these upgraded structures yield more benefits to your people.

In addition, economics comes into play. Some structures, like gold and iron mines, give you income. Others, like housing and training facilities, cost money. Therefore, you are always trying to strike a balance between income producing and income draining buildings.

As the stronghold grows, so does your population. As your subjects are generated they wander off to neighboring locations where they will wait for you to use them to build.

Stronghold is much more than a building simulation. There are actually three conflicting goals your population can pursue: building, training, and reproducing. You set the priorities through the use of a triangle which is split into three colors. You can click and drag in the triangle to change the relative priorities. For instance, when you're just starting out in a square, you probably want to put most of your energy into building. Later, when the square is all built up, you will then probably want to switch over to training and/or attracting new settlers. This may sound complicated, but it's pretty simple in practice.

There's quite a bit going on in Stronghold, and there is a ton of information available to you. You can view reports detailing the overall status of you, the leader and of each lieutenant. These are summary reports, showing current income, money saved, grain stored, population, housing available, and so forth. Besides that, you can see the population (by level) of your settlers, and view the building distribution. The leader can view these items for his own troops and for the overall settlement. You can also view individual troop levels and buildings on the overhead map, where the items of interest are marked so you can instantly zoom there. So there's no time wasted trying to find that 6th level fighter you know is just there somewhere: Just go to the census for the appropriate lieutenant and display all 6th level characters, and you see where he is.

As units are produced, they appear in squares you already own. There will always be one unit that is permanently housed in that square, and if you view it's portrait, you'll see a set of buttons in the bottom of the display. A unit can be housed, readied, or unassigned. Housed units stay where they are regardless of what happens. Unassigned units are available to go to other squares. Readied units are the first ones to go when called. And that brings us to the magnet concept. The magnet is how you direct your troops to a certain location. Under the pyramid for each leader is a horizontal bar. By clicking and dragging in this bar, which is called the magnet, you can attract that leader's followers to the current square. The units attracted consist first of Readied units, then Unassigned units. So you see by Readying a unit, you prepare it for movement.

Sooner or later, unless you're in a peaceful world, you will begin seeing enemy units. There is a fog of war effect, and your troops can only see so far. Enemy troops show up as red dots on the overhead map, and you can go to their squares and see them. Eventually battles ensue. This is one area where micro managing is not allowed. When a battle breaks out, the troops automatically do the best they can. That is, mages cast spells, clerics heal their own troops, and fighters hit. So that's why a mix of classes works best. It's fun to see the fight progressing; if you see the battle going poorly you can use the magnet to draw more free troops. A status icon appears in the form of a thermometer. The relative amounts of white and red show how your forces are doing versus the enemy's. So while you don't always know how things are going on a detailed level, you do get a feel for the general tide of battle.

Visually the battle is a treat, as you see the magic spells, missiles, and effect that hits have (when a unit is hit, stars appear above its head, and humans stagger around in a circle for a second). There is also running commentary on the screen describing the battle progress. And in case there's a battle somewhere, but you're not watching it, you will receive an initial notification that there is a conflict, and a notice when units are eliminated so you can tell who won.

Stronghold is a fun game, one that I have found it's easy to sit down to play "for a few minutes" and end up sitting at the computer three hours later. Stronghold provides a fun twist on the standard D&D games in a good mix of strategy, action, and management.