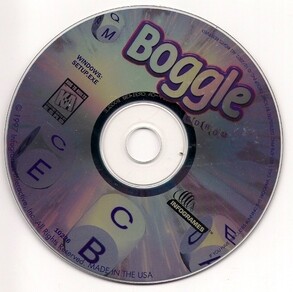 
Boggle CD-ROM is a faithfully computerized and expanded version of the board game, enhanced with new variations on the basic theme of spelling words from a random assortment of cubes with different letters on each face.

Boggle 101: You and one or more of your literate friends stare at a 4x4 or 5x5 matrix of letter cubes. You all spend the next two minutes ferreting out and writing down what long and hopefully hard-to-find words can be spelled legally from the letters in the grid. To spell a word legally, you must by able to place a mental finger on its first letter and move your finger through the grid, traversing the letters that make up the word in order, and always moving from one letter to another that is adjacent to it, either vertically, horizontally, or diagonally. After a couple of minutes of spelling words, all players stop and compare their lists, crossing out any words that appear on more than one player's list. Then, scores are tallied; longer words score more points. Winners are determined, and fortunes are made and lost.

On the computer, Boggle changes a bit. Hasbro has provided word gamers with the classic Boggle game, as well as five variations. Since a computer has but one keyboard, two or more human players cannot play seriously on the same computer. The CD-ROM does allow multiple players to use the keyboard sequentially and play a game that way. Those who will enjoy this game will enjoy playing against a computer opponent, bettering their own high scores.

At the end of any of the game variations, you and your opponents (human or computer) have your scores tallied and your word lists displayed onscreen, often spurring a bit of self-reflection as you spy obvious and familiar words on your opponents' lists and curse yourself for your own intellectual shortcomings and sometimes calling up perhaps a moue of incredulity on your lips as you notice something on someone's list that you've never, ever heard of before, and which quite possibly looks like a misspelling of "syzygy" or worse. Here's where a nice touch by Hasbro pays off - every word on every list is clickable and will call up a dictionary-style definition for it, with pronunciation, usage, and multiple definitions. No more arguments! 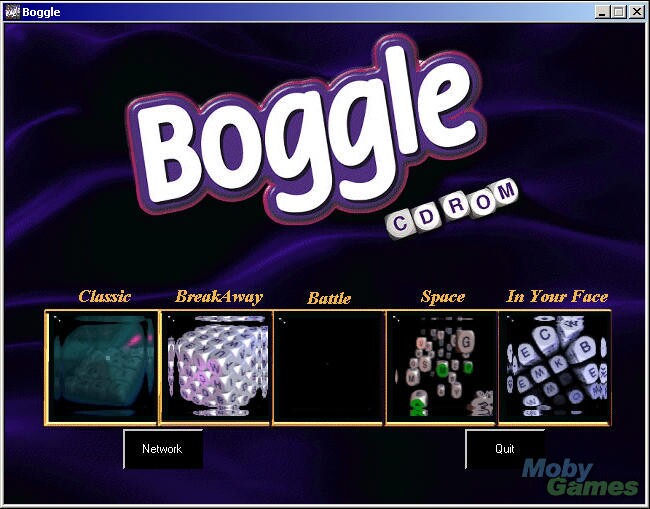 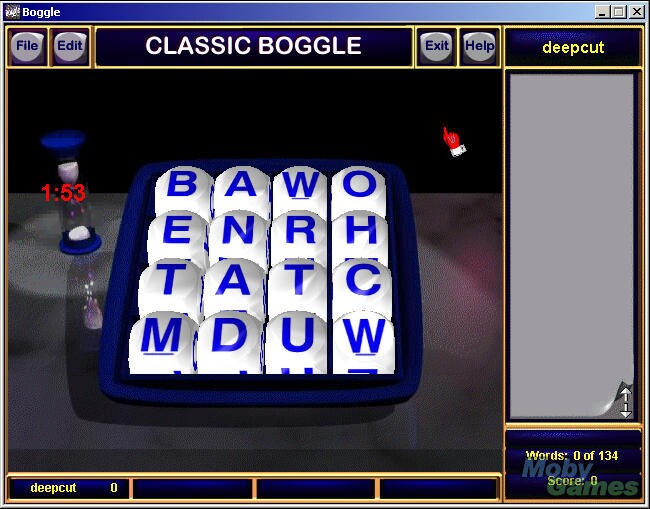