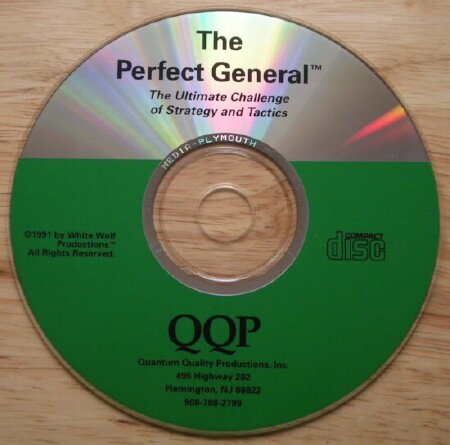 Actual Game
The Game
The Perfect General is a war strategy game based on an old US tournament series.

The aim of the game is to capture the enemy's territory and cities in a given number of game turns. Each city that is held at the end of a turn grants victory points. The player who has the most points at the end wins, no matter how many units have been destroyed.

The game comes with 12 game maps and 14 scenarios (two scenarios use the same map). Some of them have a tutorial character, some are fictitious and some scenarios have a World War II background. This may not sound too much but there are lots of game options and many units to try and so the game won't let you go for a long time.

Most scenarios are not balanced, i.e., the attacker or the defender has advantages. Therefore, a complete game consists of two battles on the same map - one played as attacker and one played as defender. Yes, this is one of the rare games where it is sometimes unavoidable (at least when playing against a human opponent) that you lose a battle. It's just a question of how well or badly you lose, and how well you are able to compensate your defeat with a great victory in the second battle. The victory points of the two battles are added up and the one who scores more points wins the game. However, it is also possible to play a game that only consists of one battle played as attacker or defender, just as you like.

Combat is mainly affected by a unit's armour, weapon range, distance to target, weapon damage, weapon accuracy, terrain (affects movement, sight and hit probability) and on some missions also weather (affects sight and movement). There are several tables in the manual that list the hit probabilities, the damage a vehicle can take/cause, the weapon range, the movement points for all vehicles and the close combat chances.

The game is limited to a certain number of game turns and can be played in two ways: Standard or long game. However, if you start a standard game and later decide that it would be fun to play some more turns, you are allowed to continue, but without scoring. In most cases standard is okay, unless you have lots of time. Because each game turn consists of several phases, a battle usually lasts several hours. For example, a full game against a human opponent on the 'Caught in the Middle' scenario (where every city captured grants 10 reinforcements points every turn) can take about 10 hours.

A game turn ends with an evaluation of the conflict so far before the next turn is started. The game continues turn by turn until the chosen turn limit is reached. Then you are presented with some statistics, regarding the scored hits, achieved hit probabilities, losses and damage assessment. After the battle(s) your skill is classified. Obviously you want to become 'the perfect general' but this is very, very difficult. Finally, your scores are entered into the commander history and if you were good enough on that scenario also into the scenario history.

To make the game more or less realistic, there are lots of game options that can change your tactics massively. You can enable 'full view' instead of 'limit to LOS', so that all units on a map can be seen at once. Otherwise units stay camouflaged until they shoot, enter open terrain or are detected when an enemy moves on to an adjacent hex field. In addition you can turn 'random hit' off and switch to 'always hit' to disable any luck and force a chess type of game. You can turn 'partial kill' off and switch 'full kill' on. Then a cheap bazooka can kill a heavy tank with a single shot. When playing against a computer opponent, 3 difficulty levels can be selected. If the most difficult level is still too easy for you, you can play with a handicap. That means that you get less buying points in the 'buy and deploy units phase'.

To sum it up, this is one of the most detailed war strategy games of the early 90s. 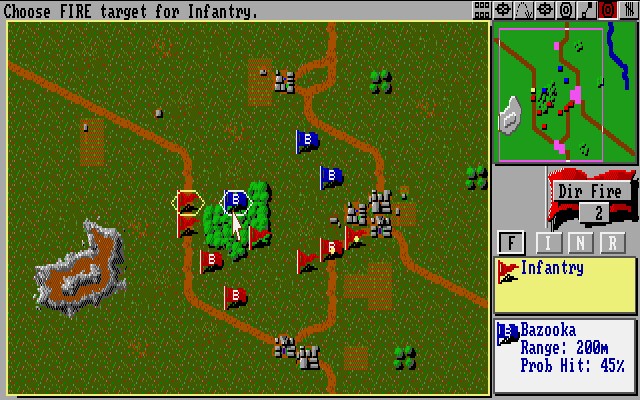 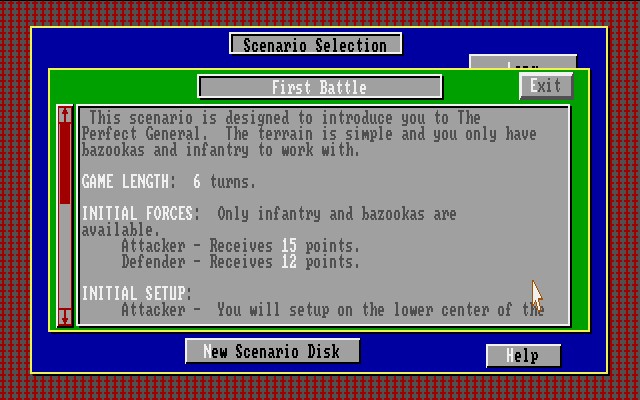