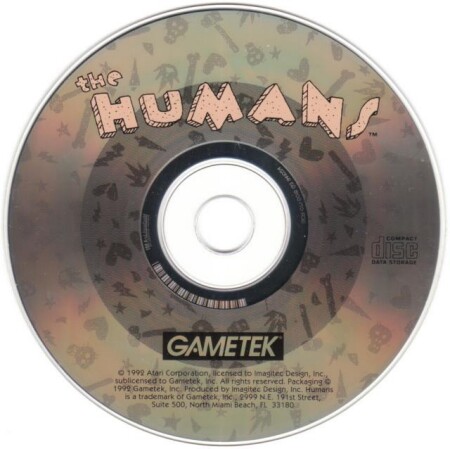 The Game
Lemmings fans will be on familiar ground here.

The concept is that you are in charge of a tribe of primitive humans (12 to begin with) and have to guide them through a series of pitfalls and help them find crucial discoveries on the way to civilization. The spear, the wheel, fire, rope, and the witch doctor. The last representing, of course, the arrival smart enough to get gullible types to do their work for them.

There are 80 timed scrolling levels of pitfalls and obstacles to take your humans through. For Lemmings fans, imagine everything blown up about five times. These guys aren't tiny like lemmings, they're big and fully animated. However, the relative size of the level is tiny compared to Lemmings. Nor do you have the flood of new lemmings appearing - rather you start out with all your humans and they stay still until you tell them to do something. You can switch back and forth between them to get them to do whatever they have to do.

To begin with, all they can do is walk around, climb, pick things up, and form human stacks by standing on each others shoulders. This is necessary in many places in the game, because the dummies can't climb up on a rock, even if it's only half their height. You need to use one guy to boost another over. The actions you can perform with the human are down at the bottom. You switch actions with the space bar (even if you're using the joystick) - as you get new items new options appear.

The first thing they'll do is find a spear (that's your goal on the first level). Once you have the technology, any human with a spear has several other options: throw it, use it as a pole vault, brandish it to scare off animals (dinosaurs), and drop it. This is all you will get for quite a few levels, and the main challenge here is jumping holes with the spear. If you fall too far the human dies, so you need to make the jump, and some of them appear impossible. Until you find that you can plant the spear in the air next to the edge for a few pixels to give you that little extra bit of distance. This is fairly lame... you find the "real" edge by inching out until your guy falls and dies.

It can be a real pain to cross a hole with your tribe - you've got to have one guy grab the spear, vault across, throw the spear back, and repeat. This involves quite a bit of space bar action. In addition, you can skewer your own guys with the spear, so you have to be careful.

I mentioned that you start out with 12 people in the tribe. Well, you get a certain number of them per level, usually about four or five. If one of them dies, one of your reserve tribesmen replaces him where he died. Once you're out of tribesmen, they disappear from the level for good and you're usually dead meet. You may also be short for the next level. You can occasionally find new cavemen on a level and free them from their cages, adding to your tribe.

The levels change their character - you start out in the caves with running lava, fairly dark, etc. You then move outside for the seasons, you'll move into a city, etc. They don't keep you bored with the scenery.

The next item is the torch - you discover fire. The human with the torch can brandish it an an animal to keep it back; he can light some vegetation on fire to clear a path; he can throw the torch; or he can drop it. Just keep the humans away from anything you ignite or it'll be a human roast.

The rope is useful for reclaiming your guys. Up till now, anyone who helped other cavemen over an object had to be left behind. Now you can lower the rope down from a cliff, or even throw it up, and the humans can climb it. You can also throw the rope to other humans.

The wheel is an interesting discovery - you can actually hop up on it and ride it with limited control. But if you start going down a hill, watch out. You'll pick up speed. You may have to do a jump with the wheel at the end of a ramp, so be ready to press the button at exactly the right time. Oh yeah, do not run over the Witch Doctor's toe with the wheel... trust me.

Finally there's the Witch Doctor. He only shows up on certain levels after you've found him. He casts spells and refuses to do menial work - he won't use any item. He will, however, participate in stacks. Using spells requires a sacrifice, however. And that's literally. When the Witch Doctor casts a spell, a human standing nearby will be "terminated." What if there's no human nearby? Well, the gods are going to very very angry. The rest is up to your imagination.

So what's the game play like? Well, like a rather slow Lemmings. You spend a lot of your time just moving guys around. You know where you have to go, but to get there you have to cross a couple pits, so you spend your time moving your guys one at a time across the pits. Jump, throw the spear, next guy jumps, etc. etc. etc. This gets old real fast. Then you screw up later and have to do it all over again.

It's great when you do solve a level - some of them are very hard, and the graphics certainly aren't boring. The interesting things you run into, such as a bird you have to jump on to to ferry you across, work to keep the interest level up, but there's still an awful lot of drudgery involved, especially with the user interface. I just couldn't get very excited about this game, even after a good number of levels. The humans are bigger than lemmings, so they're better animated and look better, but for some reason the lemmings seem to have more personality. Someone who's into Lemmings will probably get a kick out of the puzzles, as long as the mechanics of it don't wear him down. The dedicated puzzle hound should be challenged by some of the rather fiendish puzzles. 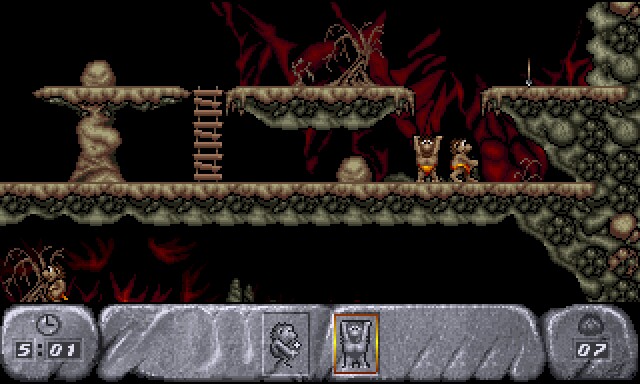 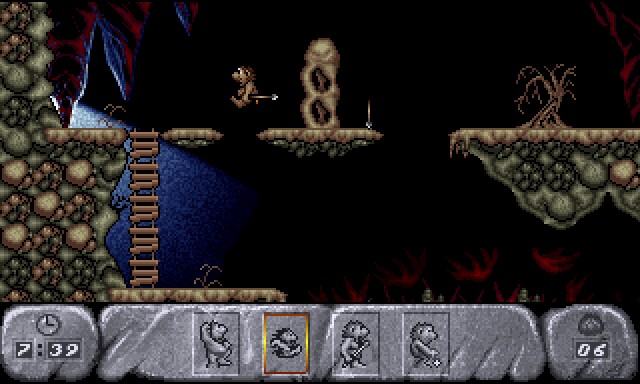