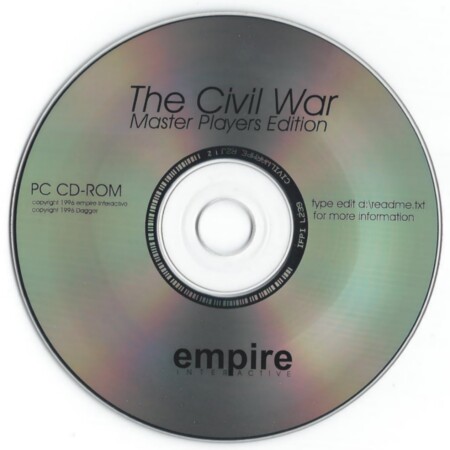 The Game
If you are a historical strategy game fan, Civil War buff or multi-play gaming enthusiast The Civil War will have plenty to offer you. At first glance this program can take on the daunting appearance of a high level strategy game but is fully configurable to just about any gamer’s’ interests and skill level.

Once the game is loaded there are plenty of options to choose from on this sophisticated program. The object of the game-simulator is to reenact the Civil War from its start in April, 1861, until the presidential election on November 8,1864. You can choose to play the role of the commander of the Northern Union or the Southern Confederates. Both sides have their own unique abilities that make the game a challenge no matter which side you choose.

Your opposition can be either the computers artificial intelligence (AI) or another player if you set up either the network or modem choices of the multi-player aspects of this simulation. There are also two modes of game play, Campaign

Mode or Historical Battle. During the Campaign mode, You play the entire campaign as a complex strategy game covering the entire eastern coast of the United States, beginning with an accurate deployment of troops as they were at the start of the Civil War. In this mode you control units on any level from Army Commander down to Brigade Commander. You can maintain cities by fortifying them, recruit new units, and build facilities, hospitals and supply depots. You will also have a degree of Naval forces at your disposal that can be used to bombard towns or cut off supply routes.

The Historical Battle mode offers users the ability to choose from a small selection of historical battles. These selections allow to control the action on a regimental level while actually viewing the battlefield in a unique 3D presentation. Most of the major elements of the battlefield are represented and you will be able to view individual soldiers marching, riding their horses, firing their muskets and engaging the enemy. This battlefield selection is also featured in the full campaign mode that gives you the option to play out important battles or defer to the computer to calculate the results. In any event, there is a lot to do depending on the realism settings you choose.

The Civil War simulator contains a wide variety of realism settings and allows you to control the complexity of every aspect of the game. I chose full realism in all selections to begin with and found it to be a challenging but playable setting. This is a simulation where some historical knowledge is helpful but not necessary.

I would recommend that a player begin by attempting the individual historical battles before jumping into a campaign. It is probably a good idea to brush up on your Civil War history through the comprehensive on-line encyclopedia that includes essays about major battles, important war time personalities and military strategies. There is also a comprehensive historically booklet called ‘Battle’ that outlines everything you ever needed to know about life for the Civil War era soldier and commander.

The campaign mode has a very detailed selection of manageable resources that include everything from building artillery regiments to constructing prisoner of war camps, Naval vessels and hospitals. As the supreme commander you can transfer any military resource, unit or division to just about anyplace on the detailed map. In some respects, there are almost too many choices and you can get immersed in the management aspects of the war effort. This is not a ‘shoot-em-up’ arcade game but rather an in depth historically accurate simulation that will require knowledge and patience to play well.

In my first campaign I took control of the Confederate forces versus the computers AI with full realism settings invoked. I was prepared for a long and protracted war but was disappointed. The AI seemed a bit weak overall and I was able to win the War within the first fifteen months and participated in no major battles for the last eight months of the war. I spent most of my playing time clicking the icons that create supplies, soldiers, ships and fortifications. To complete the simulated War took a lot of time and I was playing at least an hour just about everyday over a period of three weeks. A bit much for so little actual action after I captured a few major cities and wiped out the US Forces.

It would seem that the heart of The Civil War simulation lies in the ability to play via modem or network against another player. I would recommend this simulation for the historical buff, student or strategy buff but you may want to find a human player to compete against. Overall, this is a good product that offers entertainment and historical information in an easy to use and interesting interface. 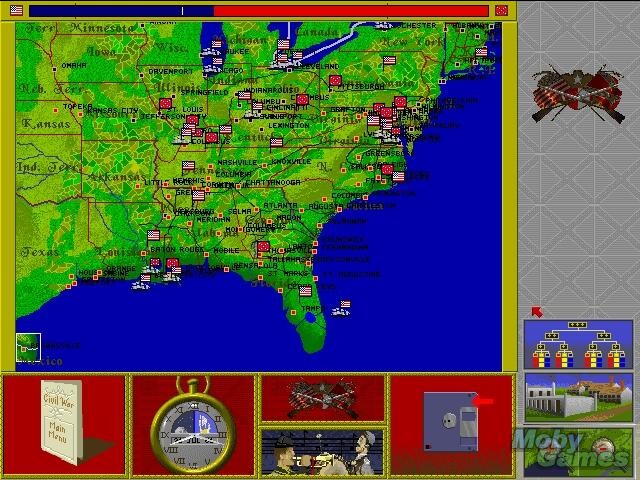 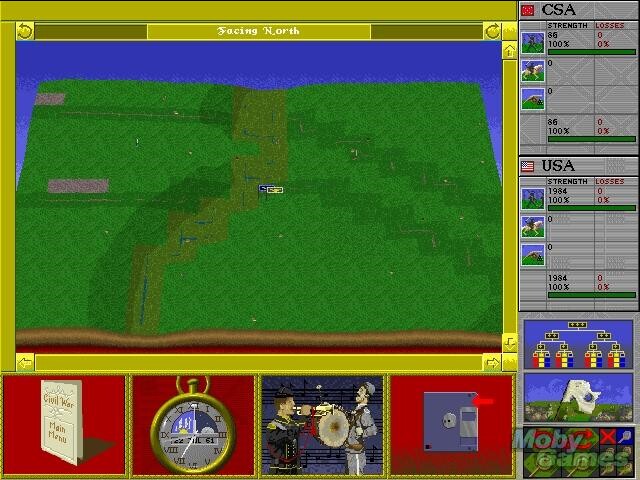