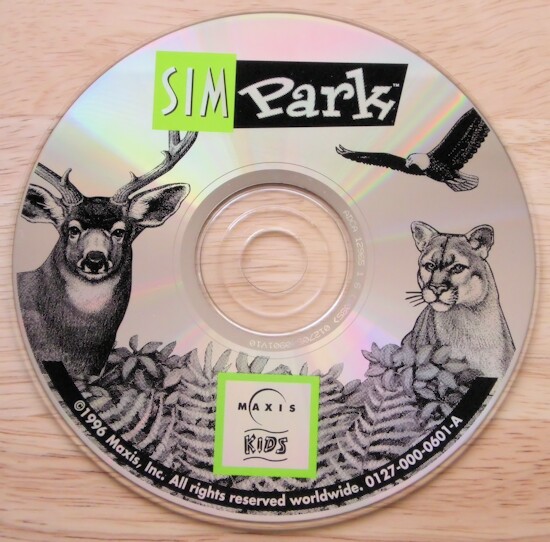 The Game
SimPark, as you have guessed, deals with the simulation and management of a real wildlife park.

SimPark allows you to build and manage parks from scratch, completely isolated from civilization. You have the choice of choosing from hundreds of different species of flowers, bushes, plants, mammals, birds, and reptiles to live and thrive in your park. Which plants and animals to put in is completely your choice, but you have to make sure that their biological needs are met so that they won't die. You start out with a bare patch of land, but as you add plants and animals, it will begin to grow. Depending on the climate and food available, certain animals will even begin migrating to your park.

SimPark contains a massive database of plants and animals that you need to use in order for your park to flourish. Over hundreds of species are cataloged in SimPark, and each article includes a brief bio, their scientific name, their wants and needs, and even an authentic recording of what each animal sounds like. You need to utilize this information to figure out what plants and animals to put in your park, in order for the creatures to flourish. If a creature or plant does not get enough food, a plant does not like the climate, or trees do not get the amount of water they need, your park will not grow.

When plants and animals are placed incorrectly, the park becomes unstable. Weeds and animals will begin to overpopulate the park. Other trees will die or get overeaten by rampaging species. Because of this, the game tries to teach the concept of a "balanced ecosystem." It is up to you to have an understanding of the animals in your park to preserve a balance. Only through a perfectly balanced biological system can all of the creatures flourish.

Besides the biological aspect, there is also the managerial aspect of it. Above all, it is up to you to manage the budget for the park. Planting trees and adapting animals costs money, and if you can't manage that money, you're fired. Even though you get federal funding each year, it is also important to attract visitors to the park to make a little income. You need to make provisions for humans, like paths and bathrooms. You also have to make sure visitors behave and do not litter or ravage the park. Besides this, you also have the duty to identify species in your park, through a mini-game which has you identify them through their characteristics. As well, you may have to decide on other things like if you want to receive donations, or cater to boyscout parties (which might have negative affects on the ecosystem).

Like any classic Sim game, you can ravage your own park with disasters. You can simulate a garbage dump disaster (a large pile of garbage and lots of rats), a fire, an alien invasion (pink and blue blobs that create garbage) and a kudzu infestation.