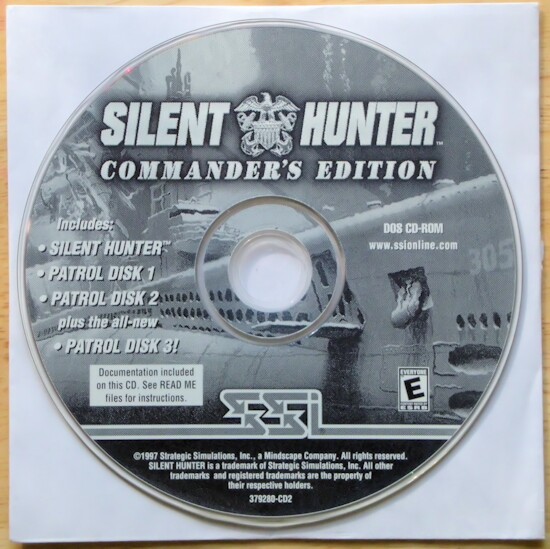 
Silent Hunter lets you walk in the shoes of such famous American sub skippers as Dudley "Mushmouth" Morton, Richard O'Kane, Sam Dealey, Bud Gruner, Freddie Warder, and George Grider, to name only a scant few. You wear the skipper’s cap and command an American submarine in search of ships of the Japanese Empire. Like the successful Aces of the Deep series, Silent Hunter takes the familiar elements of submarine warfare and brings you even closer to the experience.

The sim features the usual single missions, historic missions, and career modes. The graphics are very sharp and detailed, though the ocean motion isn't as lively as that in Aces of the Deep. The weather effects include dawns, sunsets, fog, and various sea states and moon phases. The rougher the seas, the more your top speed is handicapped. The enemy ships are far better graphically than Aces. As a convoy crests the horizon, you'll be tempted to admire the majestic beauty of the lumbering 10,000 ton marus. I wouldn't stay on the surface once they get within 15,000 yards, if I were you. The enemy convoy AI is alert for your presence. Once the enemy knows you've struck, the pack scatters in various directions while the Japanese destroyers charge down on you pronto! When there is no moon, the night is usually so dark you cannot visually see the enemy and you’re forced to plot from the "unrestricted" chart (more about the chart/mapview below). If you’re equipped with radar, though, you can get them before they know you're there.

Crew experience is part of the SH scheme and it ranges from green to elite. It makes a big difference in your diving time, torpedo reload times, and repairs. You may choose to be cautious during the beginning of a career until your crew gathers experience. SSI was smart and included a random mission generator, which essentially cranks out a new mission in every phase of the career. The mission generator lets you set the date, time, crew quality, convoy size, warship type, escort size, air cover, and weather. Some missions will take you right up to the coastline. Cities with a myriad of buildings and structures are easily identifiable--a big improvement over the repetitious green shores of Aces. If only the game would let you sail up to the docks! But there are missions that offer anchored ships, though they amount to little more than sitting ducks. Once you get a torpedo into a ship, it burns and smokes very realistically. Some ships sink by the bow or stern, others break amidships with convincing sprays of water spouting from the wounds.

The game interface is very user friendly, and historically accurate in most ways. Your mouse and keyboard orders usually generates vocal responses by ship’s crew, and for once they sound like real sailors, not computer programmers. The crewman who responds to helm orders will repeat the request, i.e., "Twenty degree, rrr-right rudder; aye sir". (Order right or left full rudder and his voice goes up an octave!) There is a lot of similarity in the details and general feel of this sim with Aces of the Deep. The overhead mapview is the same, giving you unrealistic perception capabilities. Using the mapview, you can see the convoy, what kind of vessels it consists of, and their wakes. If you wish, you can launch your attack from this screen without ever really "seeing" the ships. I prefer to use the periscope, bridge, or TBT views and consult with the chart as little as possible. My scores are much less spectacular but I relish the simulated combat feel instead of the video game aura. Silent Hunter has a preference panel that gives you options to play with fast reloads, unlimited view, and perfect torpedoes if you really don’t mind forsaking realism and want to churn up the water. Thankfully you can select more realistic settings for most game play aspects. Someday programmers will write an option to disable the real time aspects out of the mapview and have only a reference chart that is updated periodically as would be the case in real life where the contacts are estimated by sonar bearings or periscope sightings alone. You shouldn’t be able to click on a target and fire torpedoes without taking a peek through the scope. You also should not get an AI crew announcement that a target has been destroyed at a higher realism setting. Compel the player decided for himself if the burning ship is doomed and if he should expend additional torpedoes and loiter in the area, braving the escorts to get a confirmed kill.

Depending on the time of the mission, your submarine can be carrying such essential gear as SJ radar, PPI search radar, Mark 10, 14, or 18 torpedoes, and a bathythermograph for detecting the helpful thermal layers. Be forewarned, if you opt for high realism settings, your XO will announce more dud torpedoes than hits. And if you think it's frustrating to see fetching 12,000 ton Marus slipping away from your impotent fish, try to imagine what the men conning the real subs felt like! But this forces you to effect real strategies and take many less chances. You can be assigned one of several classes of boats in the career mission, from the venerable old "S" boats, to the P-class, Narwhal, T-class, and the modern Gato, Tench, or Balao class fleet subs. Each class of boat has the appropriate diving depth, number of torpedoes, and speeds. In the single mission menu, you can select convoy encounters or warship encounters, and specify what warships you want to hunt. There is a wide variety of historical missions, most well-known to submarine history buffs. With the Commander's Edition, you can use the scenario editor to conjure up an unlimited supply.

Normally, American diesel subs in WWII would spend a great deal of time on the surface, conserving their batteries for approach and evasion situations. You will be following this behavior with Silent Hunter. You can expect about 6-15 hours of sim time running submerged, depending on the speed chosen. Once on the surface again, you can bring the main engines online and recharge your batteries. The biggest fear of any sub crew was to caught on the surface by aircraft and again, in Silent Hunter, the game mimics reality superbly. Japanese aircraft will come in low and fast, forcing you to crash dive or man the AA guns. You don't have first-person control of the AA but your crew, depending on their experience, can and occasionally will, shoot down a Mitsubishi or Betty. You do get to put your aim to use with the deck gun. You may choose to sink lone ships with the cannon and save your torpedoes for escorted convoys.

The performance of the program was splendid. It never gave me any trouble or did anything untoward. The expansions included with the game give you additional choices, such as Japanese submarine battles, rescuing downed aviators, and other features like the creaking sound on really deep dives and rigging for red lighting, which really helps cut the glare while using the periscope at night. There are interviews with Capt. Bud Gruner and old clips of real action. Somehow I can’t help feeling that royalties should be awarded to the men and families that lived and died in the combat encounters from which these war games and books are created.

I enjoyed playing this sim as much as any sub sim game I’ve known. The graphics and sound are first-rate. Enemy AI is challenging and the gameplay is compelling. There are enough realism setting to make it fun for a casual gamer and still challenge the experienced subsim skipper. I would highly recommend it to the submarine aficionado and the general wartime computer sim addict alike. Silent Hunter was an instant classic. 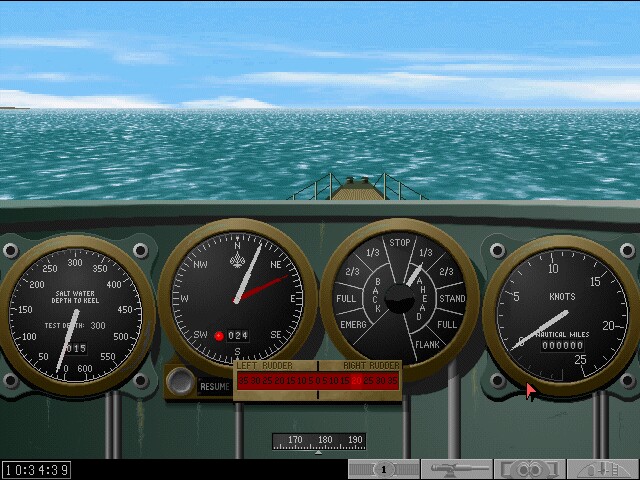 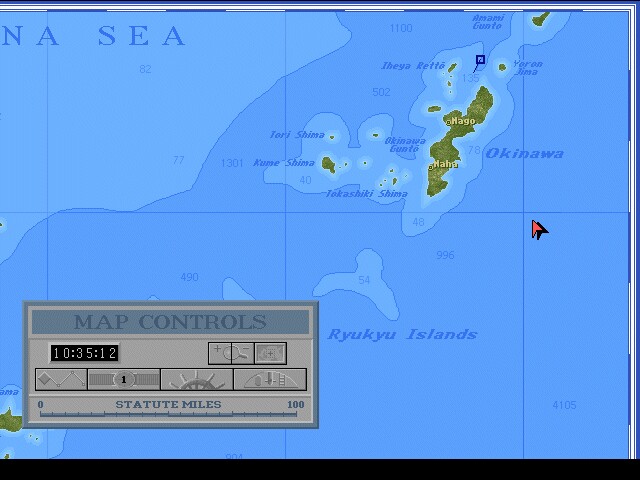